UALR women can't quite size up with Rice in opener 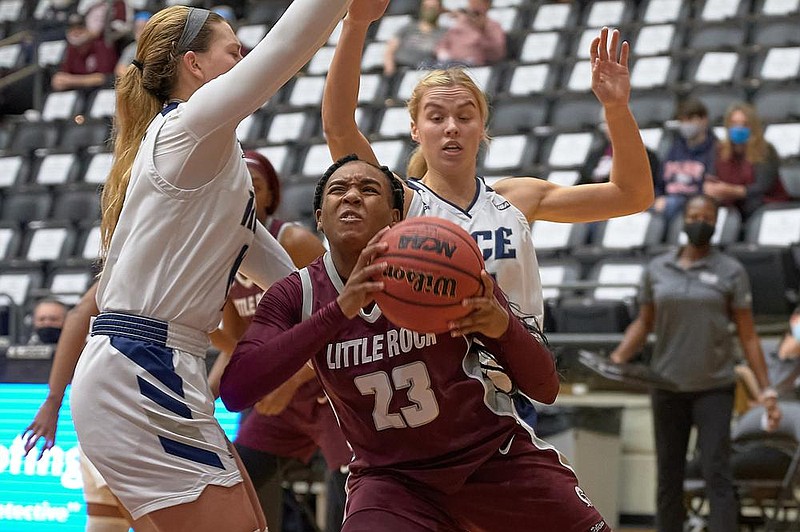 UALR’s Bre’Amber Scott led all scorers with 19 points to go with 5 rebounds and 3 assists as the Trojans opened the season with a 66-54 loss to Rice on Saturday at the Jack Stephens Center in Little Rock. (Photo courtesy UALR athletics)

It wasn't the final result Coach Joe Foley wanted, but his team's 66-54 loss to Rice on Saturday afternoon at the Jack Stephens Center wasn't an all-or-nothing proposition.

Foley, entering his 18th season with the Trojans, saw enough positives to believe the University of Arkansas at Little Rock women can and will improve upon last season's 12-19 record.

"That was a good challenge," Foley said after the season-opening loss to a Rice team that beat UALR by 24 points last season. "We know we had opportunities today. I think we're much better than what we were."

Eliminate the first and fourth quarters -- when UALR (0-1) was outscored 29-15 while missing 27 of 32 shots -- and the Trojans were neck and neck with the Owls -- except for 6-9 senior center Nancy Mulkey, who stood a head above the tallest Trojans.

Mulkey scored 13 points, had 6 rebounds, blocked 5 shots and altered the path of many others in 32 minutes.

"They had the big girl on the other end, and she went over the top of us," Foley said. "That was the big difference in the game."

UALR shot the ball 22 more times than Rice, but the Trojans made one fewer basket and 10 fewer free throws.

"They didn't have to take jump shots," Foley said, "and we did."

Little Rock Central's Bre'Amber Scott, a transfer from Mississippi State, led UALR with 19 points, 5 rebounds and 3 assists. Her 13-point second quarter helped pull UALR within 32-30 with 1:05 left in the first half.

Rice scored the quarter's final four points to lead 36-30 at halftime, and the Owls scored the first basket of the third quarter to go up 38-30 with 9:35 to play in the quarter.

The Trojans flashed a glimpse of what Foley hopes they might become, outscoring the Owls 13-1 over a 4:40 stretch of the third quarter to take a 43-39 lead when junior-college transfer Dariel Johnson scored inside over Mulkey.

The Trojans stayed on equal terms with the Owls until the final 1:02 of the third quarter.

Rice (2-0) scored the final five points to go up 53-48, and the Trojans never got closer than three points the rest of the way.

Scott, playing for the first time in more than a year, missed her final six shots, and UALR's offense slipped away with it.

"Offensively, we got all the shots that we wanted to," Scott said. "We weren't able to knock them down."

Scott and Murray State transfer Brianna Crane were playing for the first time after sitting out last season to gain eligibility.

Foley said he was encouraged by the way the Trojans played defensively -- forcing 21 turnovers -- and pleased with their ability to get off 72 shots.

"We took some wide-open shots," Foley said, "and we couldn't hit them."

UALR was breaking in four players new to the program -- Division I transfers Scott and Crane, and junior-college transfers Mayra Caicedo and Johnson. They combined to play 117 minutes.

UALR's only returning starter, Teal Battle, posted 14 points, 5 rebounds and 3 steals, but she also struggled with her shot, making 6 of 20.

"We've got some pieces," Foley said.

One thing UALR did not have was a piece to match Mulkey.

"If the big kid hadn't been out there, I think it would have been a different ballgame," Foley said.

"But that's the reason they're a pretty good ball club. They could throw it to her over the top of us, and there was nothing we could do about it. She's a difference-maker. On both ends of the floor."

Scott said the Trojans will improve as they play, with their next game coming up Tuesday in Memphis, a game just added to the schedule.

"It wasn't bad, but it can definitely be better," Scott said. "It will be better."

Lauren Heard scored a game-high 17 points, and TCU rallied from a 31-26 halftime deficit to claim a victory over the University of Central Arkansas Sugar Bears at the Ed and Rae Schollmaier Arena in Fort Worth.

UCA (0-2) picked up career-high 15-point efforts from both Jalisa Outlaw and Lucy Ibeh.

Tori Lasker led UCA with a game-high nine assists, and Briana Trigg grabbed a team-high nine rebounds, including eight on the defensive end.

TCU led 20-12 after one quarter, but the Horned Frogs were outscored 19-6 in the second quarter. TCU regained the lead by outscoring the Sugar Bears 24-10 in the third quarter.