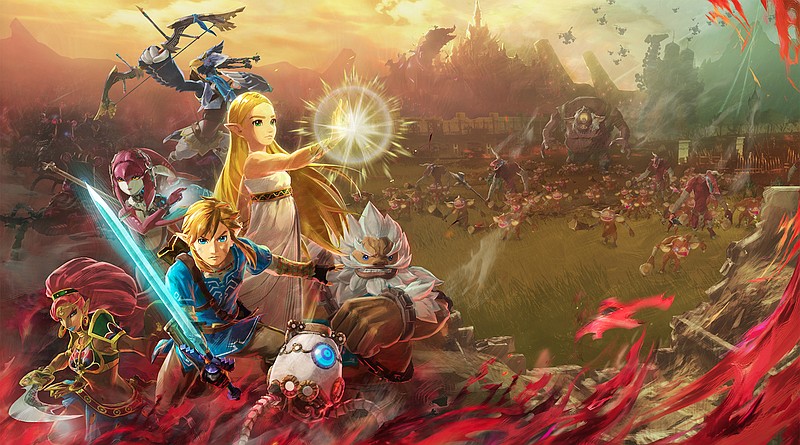 The new "Hyrule Warriors: Age of Calamity" is more than a hack-and-slash romp set within the varied fantasy lands that make up the "Legend of Zelda" universe. If you don't go in with the mindset that it's the next magical, puzzle-filled Zelda open-world game, you'll find a satisfying entry in the annals of game brilliance first created by Shigeru Miyamoto more than three decades ago.

The second edition of the "Hyrule Warriors" series — a prequel set 100 years before "The Legend of Zelda: Breath of the Wild" — is packed with action and occasional bits of lore. You witness what transpired during the brutal throwdown between Hyrule's soldiers and the minions of the gross, fiery-eyed, skull-headed monster of "hatred and malice incarnate," Calamity Ganon. You also meet a curious, humorous robot — a mini Guardian that arrives early and becomes essential to the plot.

The game's story, though, could have revealed more of Hyrule's strange and complex history. There is only one moment, near the end, during which you feel utterly moved and empathetic.

Most of the game is filled with fascinatingly choreographed action that comes at you fast. There's a disaster-filled opening sequence followed by waves of warring, and you don't need to have played any of the other "Zelda" games to get the idea that Link, Princess Zelda and others are heroic beings who help each other against a catastrophe that threatens to demolish the world.

At its best, "Age of Calamity" is more than another save-the-world story. You learn more about each character's personality and foibles as you work together to survive the onslaughts of dimwitted enemy hordes, and your weapons can dispatch so many enemies at a time, it's like you're a professional bowler with multiple balls splaying hundreds of pins at a time. It's constant fun.

Without story, though, any "Zelda" game would suffer, even an action-packed game like "Age of Calamity." You won't be moved as players were by "The Legend of Zelda: Breath of the Wild" (which was rated E for Everyone), but the cut scenes bear enough story to keep you going through the countless battles. Unfortunately, the ending leaves something to be desired.

As you bash through a hundred or so minor enemies, like pig-snouted Bokoblins and gator-like Lizalfos, you begin to get in the flow. The way the developers keep the constant battling from becoming banal is to give each team member some wildly inventive powers, performed by pressing multiple controller buttons in sequence. These combos of fire, ice, bombs, magnetism and a swirling, fireworks-filled special attack become especially helpful when dealing with the bigger, meaner enemies at the end of each quest.

Also, characters from the hinterlands of Hyrule come in and out of your team, like Avengers all-stars.

Before and after fighting, you see terrain you've traversed and characters you've met before in "Breath of the Wild." You don't have the Zen-like solace of long walks from area to area or the feeling of being awestruck by wondrous environs. Here, you click a map to travel and — boom! — you're there.

Early on, you can button-mash through multitudes of baddies. Nintendo and Koei know most players will do this. It's a thrill to watch dozens of foes fly through the air as helpless rag dolls. But once you attack robotic-looking guardians with their deadly homing rays, you must add wily, rhythmic strategy to your fighting or you'll be fried like chicken.

As I fought, I noted some camera problems that made me disoriented in corners. And sometimes aiming at an enemy wasn't accurate enough.

In addition to the thunderous powers that await, there are quieter endeavors. For foodies, there's a cornucopia of edibles you come upon, each with a tight, two-sentence description. As I collected recipes to make meals that help power one onward during quests, I got emotional as I thought about this year's Thanksgiving. But in Hyrule, it's always Thanksgiving. The cornucopia of food (and weapons) just keeps on coming.

Most importantly, you get to play as Zelda, which is a joy.

As a royal princess, she's not one to roll up her sleeves and get down and dirty with Link, the famously quiet soldier/hero clad in green. But Zelda aids your team by using the Sheikah Slate, an iPad-like device that looks ancient. Its powers are rife with spells and magic. I wished Zelda would have been as vital and essential as Link throughout the story and that she would have revealed more secrets about herself, but that wasn't to be for most of the game.

While "Age of Calamity" can feel like an uneven series of battle ballets, it does have its share of astonishing dances. It doesn't, however, go far enough to reveal more of Hyrule's and Zelda's past. But with no release date for the "Breath of the Wild" sequel in sight, this offering will, at least partially, satiate fans in the meantime.