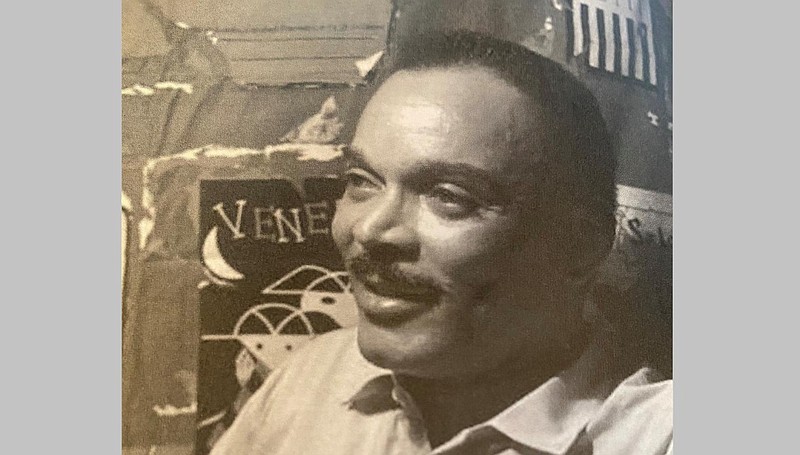 Chester Himes is shown in this undated photo.

National Novel Writing Month is celebrated every November, and so what better time to honor the literary contributions of Chester Himes, a novelist who spent his formative years in Pine Bluff, then went on to make a mark on the world of fiction.

Himes, the first nationally acclaimed African American mystery writer, lived in Pine Bluff during the 1920s. Born on July 29, 1909, in Jefferson County, Missouri, Himes was part of a family that was no stranger to books and writing. Both of his parents were teachers.

When Himes was about 12 years old, his father took a teaching job in the Arkansas Delta at Branch Normal College (now University of Arkansas at Pine Bluff). It was in Pine Bluff where a tragedy would unfold, one that would profoundly shape Himes' view of race relations.

Himes had misbehaved, and his mother made him sit out a gunpowder demonstration that he and his brother, Joseph Jr., were supposed to conduct during a school assembly. Working alone, Joseph mixed the chemicals, and they exploded in his face. Rushed to the nearest hospital with the ability to treat blinding burns, Joseph was refused treatment because of Jim Crow laws. In his autobiography, Himes states that this was the single most painful moment in his life.

Eventually, Himes' family left Pine Bluff and relocated to Cleveland. He attended Ohio State University but was expelled for playing a prank. In late 1928, he was arrested and sentenced to jail and hard labor for 20 to 25 years for armed robbery. In prison, he wrote short stories and had them published in national magazines. Himes stated that writing in prison and being published was a way to earn respect from guards and fellow inmates as well as to avoid violence.

In 1936, Himes was released on parole. He worked at part-time jobs while continuing to write. During this period, he came into contact with Langston Hughes, who helped Himes make important connections in literature and publishing.

Himes' novels were jarring. They reflected encounters with racism while describing truths his readers were unready to hear. His literary genius went relatively unnoticed within the U.S. because he wrote about black protagonists doomed by white racism and self-hate.

In Europe, however, Himes' work was attracting attention. A 1957 meeting with a French translator set in motion a chain of events that led to the creation of The Coffin Ed and Grave Digger Mysteries, a series of nine detective novels set in New York's 50s and 60s Harlem that made Himes an internationally acclaimed author. In 1958, he was awarded France's highest honor for a writer. In 1966, when Samuel Goldwyn Jr. picked up an option for six Grave Digger and Coffin stories, Himes could, for the first time, live in financial security.

Four of Himes' novels were made into feature films: "If He Hollers, Let Him Go!" (1968) [uncredited], directed by Charles Martin; "Cotton Comes to Harlem," directed by Ossie Davis (starring Godfrey Cambridge and Redd Foxx) in 1970; "Come Back, Charleston Blue (The Heat's On)" (1972), directed by Mark Warren, and "A Rage in Harlem" (starring Gregory Hines and Danny Glover), directed by Bill Duke in 1991.

Himes relished his Bohemian life in Paris. His circle of political colleagues and creative friends included Langston Hughes, Malcolm X and Picasso, just to name a few. Himes moved to the south of France and then to Spain where he lived until his death in 1984 from Parkinson's disease.