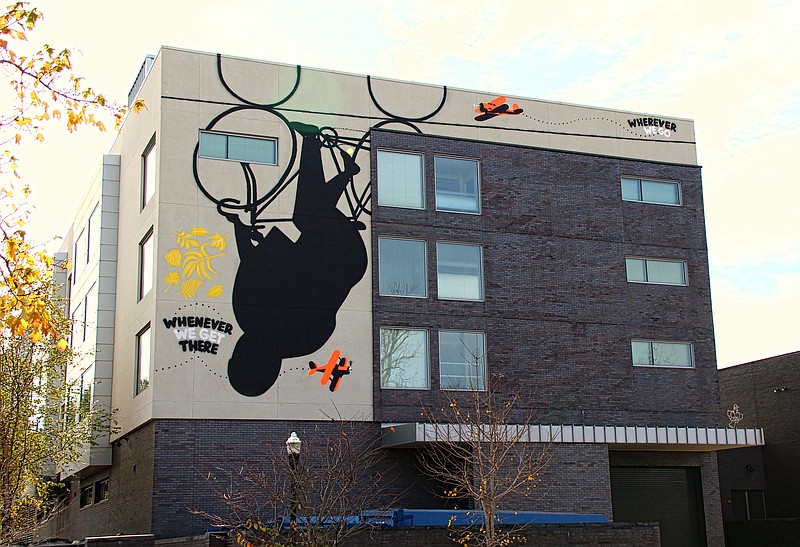 American mixed media artist Stephen Powers celebrates Bentonville's love of cycling with his mural at 200 N.E. A St., the north-facing wall of 21c Museum Hotel Bentonville. ARkanvas connected 12 muralists with nine cities, where they crafted artworks to inspire and spark conversation on the theme "Unity." (Special to the Democrat-Gazette/Bob Robinson)

Once again, world-renowned artists have ventured to The Natural State, unleashing an explosion of creativity in the form of vibrant murals with positive messages. This time their creations were not limited to a specific city; the entire state became their ARkanvas.

Since its creation in 2017, OZ Art's founders Steuart, Tom and Olivia Walton have scheduled art projects within public places throughout Bentonville. With the trials and tribulations of 2020, they resolved to install the art outdoors, in an environment that is safe and accessible to everyone.

When they decided to spread art across the state, the ARkanvas project was born.

"There were also target cities we wanted to include from the beginning," Miller said, "which we believed were overdue for the transformative experiences inspired by art."

When I studied a map of the art installations, I experienced an overpowering inspiration: "Road trip!"

With four cities in the Northwest sector of the state and the remaining five congregated in the central zone, I envisioned the ARkanvas Tour as two outings.

I chose to begin my first day-trip adventure in Central Arkansas - at 565 Front St., Conway, to be specific, the address of the abandoned Block Plant.

Arriving at the plant, I circled the vacant structure on foot, peering through open doorways and truck pull-throughs at the interworkings of the old concrete manufacturer. All very interesting. However, no mural in sight. That is, until I circled to the north side of the building. There it was, the first mural of my ARkanvas Tour.

Puerto Rican painter and muralist Alexis Diaz's larger-than-life painting envelops a 60-foot water tower from top to bottom. I was frozen in awe, struck by the contrast between the freshly painted, vibrant art and the worn, weathered, abandoned structure. However, as I continued to study the work, the dissimilarities softened until the scene became a single, natural setting. As though it were natural for the deer and wolf in the painting to call an abandoned urban factory "home."

I once asked Don Lee, an artist friend, what he was "saying" with a particular piece. Lee replied, "What is it saying to you, Bob?"

I no longer question artists about their message but instead attempt to find my own.

Knowing the theme was Unity, I decided this piece told how the wolf and the deer had overcome their inborn spirits of prey and predator, and found a way to co-exist.

There are plans for converting the Block Plant into a multilevel business complex with office suites, a common work area, sky lighting and a rooftop deck.

French muralist Youri "Mantra" Cansell has brought big butterflies to the River Market District. The colorful work promotes Unity because all kinds of people will appreciate its beauty.

"I think it's a powerful message and a strong one," Mantra says, "to say we're still here and we are able to connect people and unify through art."

Allow plenty of time for the Little Rock stop. With the Arkansas River Trail, riverside parks, restaurants, Clinton Presidential Library and many other activities, you do not want to hurry.

Also, do not plan for the drive to your next stop, at Stuttgart, to be anywhere so quick as Google Maps calculates. This is rural America. You could pause in picturesque small towns to pick up a bag of locally grown pecans or snap pictures of a waterway covered with hundreds of waterfowl.

Upon arriving at "The Duck Capital of the World," cruise to 321 S. Main St. for South African artist Keya Tama's mural.

Since he was 13, his goal has been to unite the old with the new in an iconographic style of painting. As you study the piece, you will appreciate Tama's claim, "This is the hardest I've ever worked on a mural."

There are 17 different scenes across the wall as well as collections of profound phrases. Be sure to pack a comfortable chair. You might be there a while discovering embedded messages.

It is another short drive to the next site, at Pine Bluff.

Young players dribble across the courts over these phrases:

"Push Me Down and Still I Rise."

With Maciver's use of bright red, yellow, green and purple paints, her words will not be ignored.

The final stop of the Central Arkansas tour is at Hot Springs, in the Northwoods Trails mountain bike trail system. This muralist, Camille Walala, is known to the art world as a perpetual purveyor of positivity.

As visitors drive down the steep, narrow road bordered by dense pine forest, and they first witness the vibrant colors and bold patterns Walala used to breathe new life into an old water pump house, a smile will cross their lips.

Pack a lunch to perch at one of the tables on the deck adjoining the pump house, with sparkling Bethel Lake as a backdrop.

"I think it's really nice to bring a little bit of color and hopefully a unity," Walala said, "which is quite welcoming for people to be around."

The second day trip heads to Northwest Arkansas, where the ARkanvas Tour takes travelers through a new economic development on former Fort Chaffee property. The piece is at 7300 Wells Lake Road, Fort Smith.

This 65-foot-tall, brilliantly colored water tower comes into view long before tourists enter the site. Once you reach the tower's base and are walking around its immense circumference, the larger-than-life floral collage inspires visions of Alice in Wonderland. Australian husband-and-wife artists DABSMYLA have taken the small world of daises, tulips and honeybees and supersized them to the extreme, dwarfing a human. The dark background makes it feel you can step between giant stems and enter a surreal floral fairyland.

The transformation of the drab checkerboard pattern that once shrouded the tower to this beam of life suggests the development is heading in a positive direction - a message the artist Myla sensed when she stated that the area "combines two different worlds, one from the past, and then one that's moving into the future."

While in the Fort Smith area be sure to check out the art painted downtown during earlier Unexpected mural projects. They include works from several of the artists contributing to ARkanvas. Visit unexpectedfs.com for a walking-tour map.

She did her homework on the area before arriving. Her mural includes the words "Natural," "State" and "Unity" as well as local plants, animals and a Latin American influence.

"It also has a little soft message in between images and lines," Poni says, "that we have to take care of the planet and be nice with each other."

Just up the road at 112 S. First St. in Rogers, Robert Montgomery delivers one of the most "in your face" messages in ARkanvas. This Scottish-born artist does not express his message through painted images or colors, but instead the use of light and text.

"I think we probably live in an age of accelerated image," Montgomery explains, "and we're bombarded with hundreds of images a day, and in that context, words can be a moment of quiet or pause."

After viewing the array of colorful murals I had seen on the tour thus far, I was taken aback as I rounded the building to be confronted with what struck me as a billboard. I even walked around to the back of the building in search of another mural.

Finding none, I returned to find myself a comfortable seat and thoughtfully view the piece again. I read each line, then paused to consider what was being said.

There it was, in bold text that could not be misconstrued, a message of "Unity" for all to read. Just be kind to one another.

Last, but not least, the final stop of the tour is in Bentonville. Art is everywhere you venture in this culturally charged community. The Collection, The Momentary, Crystal Bridges Museum of American Art and many other venues host art, and now ARkanvas has contributed even more.

"My interpretation of the theme 'unite' is thinking about what's currently going on in the last year," she explains, "thinking about how it can't be unity unless everyone is respected equally."

Studying the four distinctive, separate images painted on the wall, with embedded hearts within each window, I interpreted her mural's message as, "we should all love one another."

As I casually allowed my eyes to play over the piece, the fluid flow of color reminded me of a mesmerizing lava lamp.

It is a short walk to 200 N.E. A St. and our final ARkanvas work of art (for now): the north-facing wall of 21c Museum Hotel Bentonville.

When beginning a piece, mixed media American artist Stephen Powers customarily talks with people in an area, to collect a sense of who they are and their values. Such intel influences the piece, tailoring it to its home. So, including a bicycle was a given. Bentonville is a very bike-friendly community.

"You know," Powers says, "riding bikes is a universal love."

The airplane in his mural commemorates Bentonville native Louise Thaden (1905-1979), an aviation pioneer.

THE TOUR HAS ENDED

I was told artist Andre Saraiva is scheduled to paint a series of murals throughout the alleyways of Bentonville but had not started when I made my tour. Visit the ARkanvas.com website to learn more about Saraiva and view more information on the project.

Many people worked together to make ARkanvas successful. Miller said, "They wanted to do something that would unite the community and unite the state by creating these murals communities could rally around."

CORRECTION: Elizabeth Miller is the OZ Art manager for the ARkanvas mural project. She said many people were involved in making the project successful saying, "They wanted to do something that would unite the community and unite the state by creating these murals communities could rally around." Her quote and position were misattributed in an earlier version of this article.-