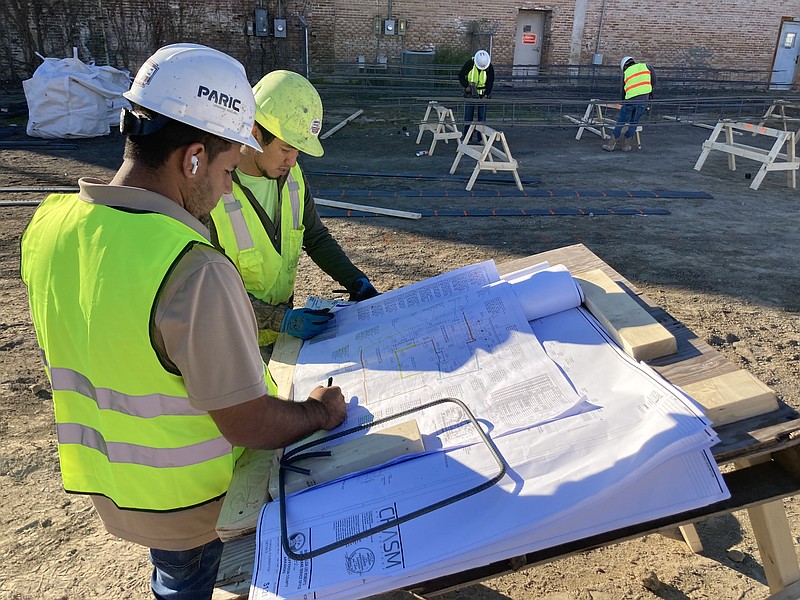 Miguel Islas, left, and Gustavo Aragon, both with Commercial Construction and Maintenance Inc., look over construction plans recently as other workers tie steel reinforcing bar for a concrete slab. The work is part of the construction project for a new Veterans Services Office being built at Second Avenue and State Street in Pine Bluff. (Pine Bluff Commercial/Byron Tate)

Progress on three new county buildings is ahead of schedule as land has been cleared and preparations for concrete slabs are underway.

A groundbreaking ceremony was held Oct. 5 for a new health department, veterans service office and coroner's office for Jefferson County, and Jefferson County Judge Gerald Robinson said he is pleased with the way things are going so far.

"Construction has progressed really well," Robinson said. "We got our permits back from the city to start."

The Sgt. Elga Lee Roberts Jefferson County Veterans Services Office building is being prepared for plumbing with the support slab expected to be poured in the next six weeks.

The U.S. Brown Jefferson County Coroner's Office has a minor delay as the county waits for engineer permits to make sure the construction doesn't violate the integrity of the levee.

"We are waiting for it to go through the cycle process to get back to us so that we can start the dirt work on the coroner's office," said Robinson.

Dirt work on the Dr. Josetta Wilkins Jefferson County Health Unit is expected to be completed next, making the site ready for the concrete slab to be poured.

"They're working out the logistics on the sewer line and waterline for the plumbing, which will be laid within the next two weeks," said Robinson.

The P3 group is overseeing the three projects for Jefferson County, with the company providing updates to the county each month, Robinson said.

"We discuss issues and problems, which aren't many," said Robinson. "Everything is moving along very well."

Robinson said what he is most proud of is the use of local vendors to complete these projects, keeping the revenue dollars in Jefferson County. According to Robinson, approximately 90% of the contractors and vendors are local.

As the wet season approaches, Robinson said he has no concerns, considering the construction of the buildings is on schedule and the slabs will be poured before the rainy season sets in on a consistent basis.

"Once we get those slabs poured, we'll be able to do whatever is necessary even in the rain," said Robinson. "These are metal frame buildings and so the rain won't stop the natural progression of the construction."

All three buildings are projected to be completed by late summer 2021. Robinson said this moment is not only for this Jefferson County administration but also for the people of Jefferson County.

"I'm really proud that they will have some ownership in these new buildings," he said. "We couldn't have gotten this done without their support."