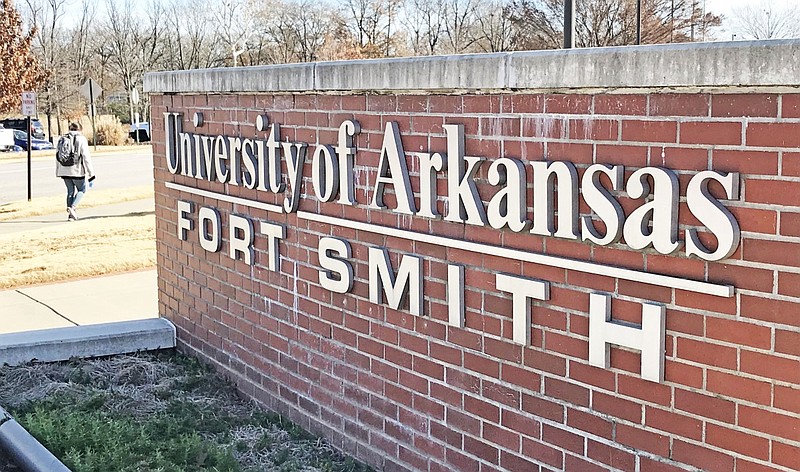 The campus of the University of Arkansas at Fort Smith is shown in this undated photo.

FORT SMITH -- The University of Arkansas at Fort Smith is nearing the end of its search for someone to fill its new executive director of diversity, equity and inclusion position.

UAFS Chancellor Terisa Riley said Nov. 18 that she can come to a decision narrowing the university's three finalists for the job down to one and having that person visit the campus "certainly before we would leave for the Christmas holiday."

The three finalists participated in their own separate "public meet and greet event" from Nov. 13-19, which UAFS conducted via Zoom. The events provided the candidates the opportunity to personally tell university faculty and staff, as well as members of the public, more about themselves and answer questions.

The one leading the search process has been Georgia Hale, the provost and vice chancellor for academic affairs at UAFS.

Hale said Nov. 18 that the university would solicit feedback on the three finalists by way of a survey that would go out to everyone who attended the virtual forums. The university's search committee, whose purpose is to look for someone to fill the position, will make a list of the candidates' strengths and weaknesses and pass this along to Riley, who will ultimately make the decision to hire.

Assuming the university still believes that these three candidates are viable at the conclusion of this process, which would include learning more from references, Riley said she will decide which one will be the sole finalist.

"And we will ask that sole finalist to come to campus in person to meet some folks in person, to see Fort Smith," Riley said. "And before we would allow a person to accept the position, we would really believe that's going to be important, for them to see where they would be living, to know more about the community, and ultimately, to be sure that they feel they could be successful here. So that might be the deeper dive conversations into things like resources and community relationships, that kind of thing."

All of this takes place after an incident involving a men's basketball player and the team's coach last year. Former player Tyler Williams, who is Black, said in September 2019 that he was dismissed from the team the previous August after Coach Jim Boone, who is white, expressed disapproval of Williams' dreadlocks, according to previous Arkansas Democrat-Gazette articles.

An internal investigation found no "substantial" evidence of racial discrimination by Boone, and an attorney representing Boone has denied any such discrimination.

The job description for the executive director of diversity, equity and inclusion position states that it serves as the chief diversity officer for UAFS, and "drives the development and implementation of university strategic plans and frameworks for diversity, inclusion, and social equity." It will both report directly to the chancellor and be a member of the chancellor's cabinet.

Hale believes the first thing that the executive director would need to do after being hired is come to the university and help it establish a plan for being an inclusive campus.

"I know that as we've talked to the couple of candidates who've been on campus, they've been asked, 'What would you do first?'" Hale said. "And both of them said, 'We would look at the campus climate survey and see where we are and talk to Dr. Riley about where we want to go,' and then they would help us establish a strategic plan for doing that."

Riley said the original intent was for the executive director to make sure that the university keep diversity, equity and inclusion at the forefront of its thinking in its decisions, actions, policies and procedures. Taking a full inventory of the campus would also come from filling this position.

"We're not living at a place where we don't do anything already, which is great," Riley said. "I would indicate to anyone who accepts this position that it has to be more centralized with intentionality."

Among other duties of this position, according to the job description, are:

• Developing and maintaining active partnerships with the community and appropriate alumni groups in support of diversity, equity, and inclusion at the university.

• Working with leadership to design and implement strategies to help recruit, support, and advance diverse faculty, staff, and students from under-represented groups.

• Collaborating with administration, faculty, and staff to coordinate and guide efforts to assess and cultivate diversity as a "fundamental institutional and educational resource."

Riley said the position's annual salary is negotiable, although a range has been used in discussions.

Apart from Hale, who serves as chairwoman, the university's search committee consists of 10 members, according to Rachel Putman, associate director for strategic communications at UAFS. These include both UAFS faculty and staff, as well as a student and a member of the community.

Hale said the committee began the search in fall 2019 under Riley's direction.

"And we wrote a [job] description for someone who would probably have an already well-developed office with people there working in that regard, and that person would be overseeing all of the operations in that office," Hale said. "When we got the applicants, we realized that we needed someone closer to the ground, someone who's going to help us build up such an office on our campus over the years."

After rewriting the job description, Hale said UAFS looked at people who had not only worked in the area, but had also started programs and could use that experience to help the university develop such a program. Hale said the applicant pool that came from this was "much better" than the first, with 40 people applying for the position.

The three finalists chosen from the pool of applicants were Tasha Alston, John Blue and Pamela Hill, all of whom are Black.

Alston, who described herself in her virtual forum as an educational psychologist and social worker, is currently an assistant professor in the department of social work at Western Carolina University in Cullowhee, N.C., her curriculum vitae states. She earned a Doctor of Philosophy in educational psychology from the University of Georgia in Athens, Ga., in December 2016.

Alston said she has 23 years of experience in the field of diversity, equity and inclusion, and doing work to support these three things. This includes her research agenda of working with culturally diverse individuals and families to support equity in education, extensive administrative work with culturally diverse programs and serving as the principal investigator for research projects, among other activities both inside and outside of higher education.

Blue, according to his curriculum vitae, is the director of student life and multicultural affairs at the University of Tennessee at Martin in Martin, Tenn. He has a Master of Science in leadership from Nova Southeastern University in Fort Lauderdale, Fla., and is working on a Doctor of Education in higher education at the University of Mississippi in Oxford, Miss.

Blue said he has more than 15 years of experience in many different functional areas in higher education. This is confirmed by his curriculum vitae, which, in addition to his current occupation, lists various positions at Hillsborough Community College, Broward College, Moffitt Cancer Center and Research Institute and Bethune-Cookman University, which are all in Florida, as well as Mississippi State University in Starkville, Miss.

Hill said she is an adjunct assistant professor at the University of Texas at Arlington, in addition to being a consultant through her company, which does diversity education training twice a month. Her curriculum vitae states she has a Doctor of Philosophy in higher and adult education and foundations from the University of Missouri-Columbia in Columbia, Mo., which was conferred in May 1994.

Hill said she has worked in diversity, as well as taught in higher education programs, for more than 20 years. Among the other places she worked, according to her curriculum vitae, are Northern Kentucky University in Highland Heights, Ky., University of North Texas, Paul Quinn College in Dallas and Texas A&M University-Commerce.

At the same time, 57 is the total enrollment for graduate students at UAFS. This includes 39 white students, six students who are two or more races, five Hispanic students, five Black students and two American Indian students.