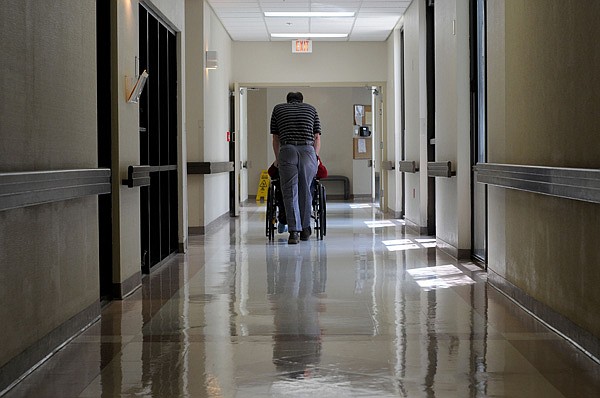 The activity director at the Windcrest Health and Rehab Inc. nursing home in Springdale pushes a resident down a hall in this July 29, 2013, file photo.

The findings suggest testing lags that have persisted months into the the global health crisis, and which experts say could ignite further outbreaks in long-term care facilities.

The newspaper's review of weekly data that nursing homes submit to the government found that 77 of the state's facilities reported at least once in October or November that it took "3-7 days" to get residents' test results back. The homes' staff selected that response instead of "less than one day," "1-2 days" or "more than 7 days," which were the other options.

Twelve homes said it took three days or longer to get results back for each week from the beginning of October through Nov. 8, the most recent date for which data was available.

Prompt diagnosis of covid-19 is especially important for elderly nursing-home residents, who are at a high risk of becoming seriously ill or dying if sickened. On Wednesday, health policy nonprofit Kaiser Family Foundation said it has tallied more than 100,000 U.S. deaths of those residents and nursing-home staff related to the new coronavirus.

The reports of delayed results come as Arkansas' average covid-19 death rate for nursing-home residents climbs to the fourth-highest among states, at 96.3 per 1,000 as of Wednesday, records show.

When test results don't come back promptly, residents "can't be protected -- and neither can the employees," said Martha Deaver, president of Arkansas Advocates for Nursing Home residents. Delays are a "huge issue" that she regularly hears complaints about from families, she said.

Rachel Bunch, executive director of the nursing-home advocacy and lobbying group Arkansas Health Care Association, said she had heard reports "off and on" about slow test results from members, especially in the wake of new testing requirements from the federal Centers for Medicare and Medicaid Services agency which oversees nursing homes.

The situation seems to have improved in recent weeks, she said, adding that "what I'm hearing more now is about labs that are busy because of outbreaks in communities."

Arkansas Department of Health's medical director for infectious disease said he also couldn't easily explain what the nursing homes reported, saying that the health agency's lab is testing nursing homes about once a week and returns results in 24-30 hours.

He echoed the idea that there has been a recent shift, noting that "last month might have been different -- things now have improved," the director, Dr. Naveen Patil, said.

Waits of several days to get results are "like you're not getting the test at all," warned Rajendram Rajnarayanan, assistant dean of research at New York Institute of Technology College of Osteopathic Medicine at Arkansas State University. Degraded specimens could return inaccurate results, and exposing others while waiting can spread infection, he said.

It's not clear if the delays reported by many nursing homes were related to a particular laboratory, whether they also are using quicker but less-reliable rapid antigen tests for residents or if the delays stemmed from the surveillance testing Patil says the state's lab conducts of nursing homes.

Of 12 nursing homes that consistently reported three days or more to get residents' test results, 10 didn't provide elaboration. Administrators and staff at four declined to comment, four did not return messages or answer the phone, one said it was a bad time for a call because regulators were on-site and one hung up on a reporter.

Spencer Rogers, administrator at St. Andrew's Place in Conway, said the situation has been resolved, but did not specify what caused it. Results from the Health Department's lab now come back in 48 hours and the facility also uses commercial labs to process tests in some situations, he said.

An administrator at The Waters of Cumberland in Little Rock who did not want to be quoted directly said that facility usually submits specimens to the Health Department on Friday and can see results in an online portal late Sunday or early Monday. (The discrepancy with Patil's description of turnaround times is likely because of differences in the way the figure is calculated, a Health Department spokeswoman said.)

The delays add to a string of discouraging data points about of the pandemic's effect on nursing-home residents, both in the state and around the country.

Between Nov. 6 and Nov. 23, documents show the Arkansas Department of Health reported 188 additional nursing-home resident deaths -- almost 17% of the state's 1,078 total resident deaths. Altogether, 6,961 residents have been sickened, according to the same records.

Slower test results hearken to the early days of the pandemic in the U.S., when public health experts fretted that limited availability and late returns of covid-19 tests meant the country was largely "flying blind."

The problem poses danger in long-term care, experts say, where disease spreads quickly and residents have experienced the most dire outcomes. It's "really important" both that tests come back quickly and that they be accurate, said Marcia Ory, director of the Center for Population Health and Aging at Texas A&M University's School of Public Health.

In her view, the "silver lining" of the pandemic will be nursing homes improving these types of processes and infection control protocols.

"It is likely within the next five years there's going to be another infectious disease making the rounds," she said.

Dr. Mark Ebell, an epidemiology and biostatistics professor at the University of Georgia's College of Public Health, said a delay in test results could be difficult for residents -- such as those with dementia -- who may not understand why they are being isolated while waiting to know their status.

Some emerging treatments that stop the virus from replicating likely only work within the first few days after symptoms appear, so it's important to confirm a diagnosis early, he said.

Rajnarayanan said that in a perfect world, nursing homes would test everyone every day. He recommended the long-term care industry work to further diversify its testing strategies, especially as case numbers rise in the community and workers are more likely to become infected.

"If you look at the number of rising community infections, and the cases inside the nursing homes, they align one on one," he said.

Experts said it's hard to predict whether the testing challenges many states experienced in the spring will recur for the general public. Some of the supply-chain issues, such as shortages of chemicals needed to run tests called reagents, could play a part, they said.

"We're probably better positioned to do more testing now than we were before, but also, the number of cases is higher than it has been before," Ebell said.

Testing struggles in Arkansas nursing homes parallel those experienced by nursing homes across the country this fall, academic research shows.

An analysis that appeared on the Journal of the American Medical Association website in October found that in late September, roughly 40% of nursing homes nationwide were still reporting test-result turnaround times of three days or longer. Only "a small fraction" had a turnaround time of less than one day.

"Although testing delays improved over time, the state of testing is far behind the less than 24-hour turnaround that epidemiological modeling suggests is essential to prevent COVID-19 outbreaks" in nursing homes, the researchers wrote.

The federal government has pushed to expand testing in nursing homes, implementing new rules on frequency of staff testing based on the test-positivity rates in a nursing home's county. It also has sent rapid-response test machines to selected facilities, though some types of the latter do tend to miss cases, the Health Department's Patil acknowledged.

After boasting low nursing home infection and death rates earlier this year, the numbers have crept up in recent months. In addition to high average death rates among residents, on Wednesday Arkansas' average covid-19 case rate in the facilities was the nation's highest, at 431.6 per 1,000.

Industry and health officials attributed the high numbers to the uncontrolled infection spread, a resident population that reflects chronic health issues common in Arkansas and a virus Patil characterizes as unpredictable.

In response to a summary of the spiking death and case rates, Deaver, the Arkansas nursing-home resident advocate, called the figures "outrageous."

"The only people that have the ability to stop that from happening, and to stop infections, and stop the spread, are the people in charge," she said.

"The fact that they're not doing it is costing lives everyday."