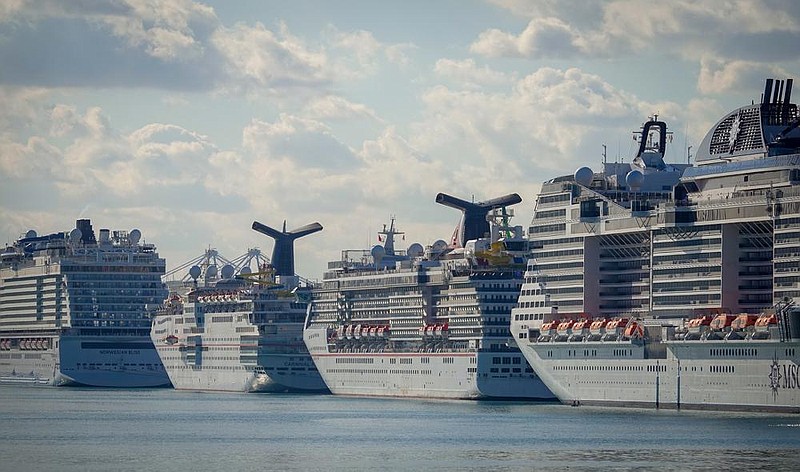 Cruise ships sit at the Port of Miami in April after being docked to stop further ship-borne coronavirus outbreaks. A new Centers for Disease Control and Prevention order to keep cruise ships docked until mid-February was overruled Wednesday by the White House coronavirus task force. The ships will now be allowed to sail after Oct. 31 under a voluntary industry plan. (The New York Times/Angel Valentin)

The White House has blocked a new order from the Centers for Disease Control and Prevention to keep cruise ships docked until mid-February.

The current "no sail" policy, which was originally put in place in April and later extended, was set to expire Wednesday. Dr. Robert Redfield, director of the CDC, had recommended the extension, worried that cruise ships could become viral hot spots, as they did at the beginning of the pandemic.

But at a meeting of the coronavirus task force Tuesday, Redfield's plan was overruled, according to a senior federal health official who was not authorized to comment and so spoke on condition of anonymity. The administration will instead allow the ships to sail after Oct. 31, the date the industry had already agreed to in its own, voluntary plan. The rejection of the CDC's plan was first reported by Axios.

Redfield worried before the Tuesday decision that he might get fired, and had considered resigning if he were required to oversee a policy that compromised public health, according to a senior administration official as well as a person close to Redfield.

Brian Morgenstern, the White House deputy press secretary, said the administration's cruise ship plans were not politically motivated. "The president, the vice president and the task force follow the science and data to implement policies that protect the public health and also facilitate the safe reopening of our country," he said.

The CDC under Redfield's leadership has received criticism from scientists for its handling of the pandemic, beginning with its rollout of testing kits last spring. Political appointees in the health department pushed through CDC guidelines -- despite objections from the agency's own scientists -- saying that people without symptoms did not need to be tested for the coronavirus. The agency then reversed course to recommend testing. It also recently issued new guidance on airborne transmission of the virus, only to take it down a few days later, saying it had been "posted in error."

Redfield warned that allowing cruise ships to sail without proper precautions could lead to a public health disaster.

The Diamond Princess cruise ship became one of the first examples of a coronavirus superspreading event this winter, when more than 700 of its 3,711 passengers and crew tested positive, and 14 died. Between March 1 and July 10, there were 2,973 cruise-related cases of covid-19 or covid-like illness, and 34 deaths, according to the CDC.

The Cruise Lines International Association said the industry generates $53 billion annually in economic activity. The Florida Ports Council said that state's cruise industry, the largest in the nation, has been the hardest hit by the coronavirus.

Republican politicians in Florida and cruise industry lobbyists have called for ending the no-sail order. "I urge the CDC not to extend or renew the 'No Sail Order,'" Carlos A. Gimenez, the Republican mayor of Miami-Dade County, said in a statement Saturday.

On Sept. 16, U.S. Sens. Rick Scott and Marco Rubio, both R-Fla., proposed the Set Sail Safely Act, which would create a maritime task force to work on the logistical changes needed for the industry to safely resume operations.

"The Florida delegation is very supportive, and is trying to work with the administration and the CDC to see what efforts we can do to get the industry up and operating," said Michael Rubin, vice president of governmental affairs for the Florida Ports Council. "It's still the only industry that's not allowed to operate at the moment."

President Donald Trump had included the chairmen of three major cruise lines -- Carnival, Royal Caribbean and Norwegian -- on a White House task force formed in April to advise him on ways to reopen the country.

Although the cruise lines were hit hard by the coronavirus, they were ineligible for stimulus funds because they are incorporated overseas.

The cruise industry association, which says it represents 95% of oceangoing passenger ship capacity globally, is seeking a gradual resumption of sailing, starting with voyages containing crew members acting as passengers.

Its plan is based in large part on recommendations from the Healthy Sail Panel, which was established by several of the major cruise lines and was led by Michael Leavitt, a former Utah governor and health secretary, and Dr. Scott Gottlieb, a former head of the Food and Drug Administration.

Dr. Stephen Ostroff, a former acting commissioner of the FDA, who serves on the Healthy Sail group, said they have recommended that cruise passengers be tested before arriving at the ship, and then again before boarding.

Ostroff acknowledged that passengers who are infected by the virus en route to the ship wouldn't necessarily test positive when they board but could still spread the virus to others. He also said the group's other recommendations, such as allowing fewer passengers, enforcing mask wearing and installing improved air filtration systems, aim to limit the spread of the virus on a ship should an infected passenger board.

Meanwhile in Alabama, Gov. Kay Ivey and health officials on Wednesday extended an order requiring the wearing of masks in public, arguing that the requirement has proved effective at helping control the state's coronavirus outbreak.

The five-week extension, announced during a Capitol news conference, means the mask requirement will be in effect on Election Day, and through much of the remaining high school and college football seasons.

Ending the mask ordinance could harm the state by leading to a "false sense of security," Ivey said, and a "safe environment" is needed for in-person voting.

The mask rule, which took effect in mid-July, was set to expire Friday but will continue through Nov. 8 under a health order released by Ivey. It requires anyone over the age of 6 to wear masks in indoor public spaces and outdoors when it's impossible to stay at least 6 feet away from others.

In North Dakota, executives at a Bismarck marketing agency have been hired to help stem the tide of rising virus cases in central North Dakota.

Agency MABU was hired by a governor's task force in Burleigh and Morton counties that is nearly six weeks into its effort and frustrated by the lack of progress in an area that includes the cities of Bismarck and Mandan.

In the meantime, MABU has created messages designed to leverage North Dakotans' strong sense of freedom -- the same thing that Republican Gov. Doug Burgum has said would make it difficult to impose a mask mandate even as last week he raised the risk levels of a dozen counties, including Burleigh and Morton.

In Fargo, the state's largest and most liberal city and runaway leader in total number of covid-19 cases, residents flooded a City Council meeting last month to complain about a proposal to require masks. Mayor Tim Mahoney said emails to his office have been 80% opposed to a mask mandate.

"It's about letting people know that everyone is free to respond as to how they choose to protect themselves and others," Mabin said. "It's more coming at it from their own personal motivation for self-preservation, but more importantly the altruism and being empathetic to others."

"We should not use the heavy hand of government more than it is justified," Reeves said at a news conference.

Separately, Trump has scheduled large campaign rallies this weekend in Wisconsin, despite recommendations from the coronavirus task force that call for increasing social distancing in the state "to the maximal degree possible."

The task force has further flagged La Crosse and Green Bay, the metropolitan areas where Trump plans to gather thousands of supporters Saturday, as coronavirus "red zones," the highest level of concern for community spread of the virus, according to a report from the group released Sunday and obtained by The Washington Post.

Wisconsin is listed in the document as the state with the third-highest rate of new cases in the country, with 243 new cases per 100,000 people over the previous week, about 2.6 times greater than the national average.

"During the intense period of viral surge, large numbers of acutely infected individuals caused exponential growth in infections," the task force report reads in a section about Wisconsin. "Although young adults are the most affected group currently, spread to other age groups is inevitable."

In addition to the White House task force's guidance, local concern has been growing in Wisconsin about Trump's planned events, which are scheduled for outdoor airplane hangars without universal mask mandates. Democratic Gov. Tony Evers said Tuesday in a news briefing that Trump should either cancel the events or require mask-wearing by everyone who attends.

"This virus is real, and it is devastating our communities, and it will continue to do so until we all get on the same team," Evers said in a press call.

Courtney Parella, a deputy national press secretary for the Trump campaign, said everyone at Trump's outdoor events receives a temperature check, is provided a mask they are encouraged to wear and has access to hand sanitizer.

"Americans are enthusiastic for President Trump's reelection," Parella said in a statement. "And they want to and have a right to gather under the First Amendment to hear from the President of the United States.

Trump had an outdoor airport rally in Duluth, Minn., on Wednesday, and has one scheduled in Sanford, Fla., on Friday.

Biden plans a tour by train, with whistle-stops in Alliance, Ohio, and four cities in Pennsylvania: Pittsburgh, Greensburg, Latrobe and Johnstown.

The Biden campaign said it will test everyone who rides on the train but has not yet announced what other precautions will be taken for the tour.

Information for this article was contributed by Sheila Kaplan of The New York Times; by Michael Scherer and Lena H. Sun of The Washington Post; and by Dave Kolpack and Leah Willingham of The Associated Press. Leah Willingham is a corps member for The Associated Press/Report for America Statehouse News Initiative. Report for America is a nonprofit national service program that places journalists in local newsrooms to report on undercovered issues.