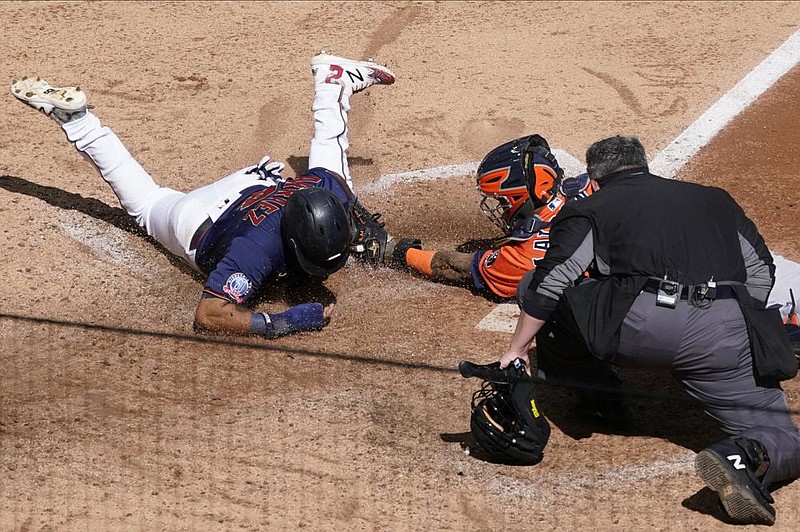 Home plate umpire Manny Gonzalez watches as Minnesota’s Luis Arraez (left) is tagged out by Houston catcher Martin Maldonado as he attempted to score on a Marwin Gonzalez single in the fifth inning of Wednesday’s Game 2 of their American League wild-card series at Target Field in Minneapolis. Houston won the game 3-1 to sweep the series and handed Minnesota its 18th consecutive postseason loss. (AP/Jim Mone)

MINNEAPOLIS -- Shaken up by a scandal before the virus outbreak shrunk the season, the Houston Astros barely played well enough to reach the playoffs -- with the rest of baseball actively rooting against them.

Well, they're not ready to leave yet.

Carlos Correa hit a two-out, tiebreaking home run in the seventh inning for the Astros, who produced another stifling pitching performance and swept Minnesota over two games with a 3-1 victory Wednesday that sent the Twins to a record 18th consecutive postseason loss.

Nine months after Houston's rules-breaking, sign-stealing system was revealed, the Astros advanced to the division Series in Los Angeles. As the sixth seed, they'll face the Oakland Athletics or Chicago White Sox in a best-of-five matchup starting Monday at Dodger Stadium.

"I don't think they necessarily thought that they had anything to prove. They just had to play ball," said Manager Dusty Baker, who took his fifth different team to the playoffs and advanced for the first time in seven rounds since winning the 2003 NL division series with the Chicago Cubs.

The Twins are 0-18 in the playoffs since winning Game 1 of their division series at the New York Yankees on Oct. 5, 2004, a total of seven rounds lost. Since that date, the Astros are 43-35 in postseason play, winning 10 of 15 rounds with three trips to the World Series.

Kyle Tucker hit two RBI singles for the Astros and made a key throw from left field for an inning-ending out in the fifth.

Rookie Cristian Javier worked three hitless innings in relief for the victory in his postseason debut, and Ryan Pressly pitched a perfect ninth against his former team, giving the Houston bullpen a total of 92/3 scoreless innings in this wild-card series with three hits allowed.

"From the very beginning, we envisioned ourselves back in the playoffs and playing real well," Tucker said. "So we never counted ourselves out at any point."

Nobody on this Twins team has had a hand in more than six of the playoffs losses, but for the second consecutive year one of baseball's most potent lineups limped through a brief postseason cameo. In a three-game division series sweep by the Yankees last year, the Twins totaled seven runs and 22 hits. Against the Astros, they mustered only two runs and seven hits.

"We put a lot of balls in play, it seemed like, but they were up in the air and, yeah, it seemed like we played into their trap," said Max Kepler, one of four starters who went hitless in the series.

Nelson Cruz gave the Twins an RBI double for a second consecutive game, this time in the fourth inning against starter Jose Urquidy. Luis Arraez aggressively tried to score from first base, but Correa took the throw from Tucker and fired home to beat Arraez to the plate to preserve the tie.

Then in the seventh against losing pitcher Cody Stashak, Correa drove a 1-0 slider into the tarp-covered seats above right-center field for his 12th home run in 52 playoff games.

Renfroe launched the first playoff grand slam in franchise history during a six-run second inning. Tyler Glasnow kept Tampa Bay ahead from there, allowing two runs -- on a pair of home runs by Danny Jansen -- in six innings.

The next round starts Monday at Petco Park in San Diego. Renfroe is plenty familiar with the stadium -- he hit 85 home runs in the previous three years for the Padres before being traded to the Rays last December.

Glasnow walked one and struck out eight.

Ryu was rocked for a season-high seven runs in 12/3 innings, the lefty's shortest outing of the season for the wild-card Blue Jays.

OAKLAND, Calif. -- Marcus Semien and Khris Davis homered early and Oakland held off Jose Abreu and Chicago in the late innings for a victory that sent their playoff series to a deciding Game 3.

A's reliever Jake Diekman walked home a run in the ninth, then retired the big-hitting Abreu on a sharp grounder to end it and even the best-of-three wild-card matchup at 1-1.

Game 3 is today at the Coliseum.

Chris Bassitt allowed one run on six hits in seven-plus innings during an impressive postseason debut as the AL West champion A's snapped a six-game postseason losing streak dating to 2013.

The right-hander, drafted by the White Sox before being traded to Oakland in December 2014, came in on a nice roll having won his last three regular-season decisions.

Things got interesting when Bassitt gave way to Liam Hendriks after a leadoff single to Tim Anderson in the eighth with a 5-0 lead. Yasmani Grandal hit a two-run home run one out later.

Hendriks surrendered a pair of two-out singles in the ninth and walked Yoan Moncada to load the bases. Diekman relieved and walked Grandal to bring home a run.

Abreu hit a hard grounder to second base as Diekman earned a tough save. 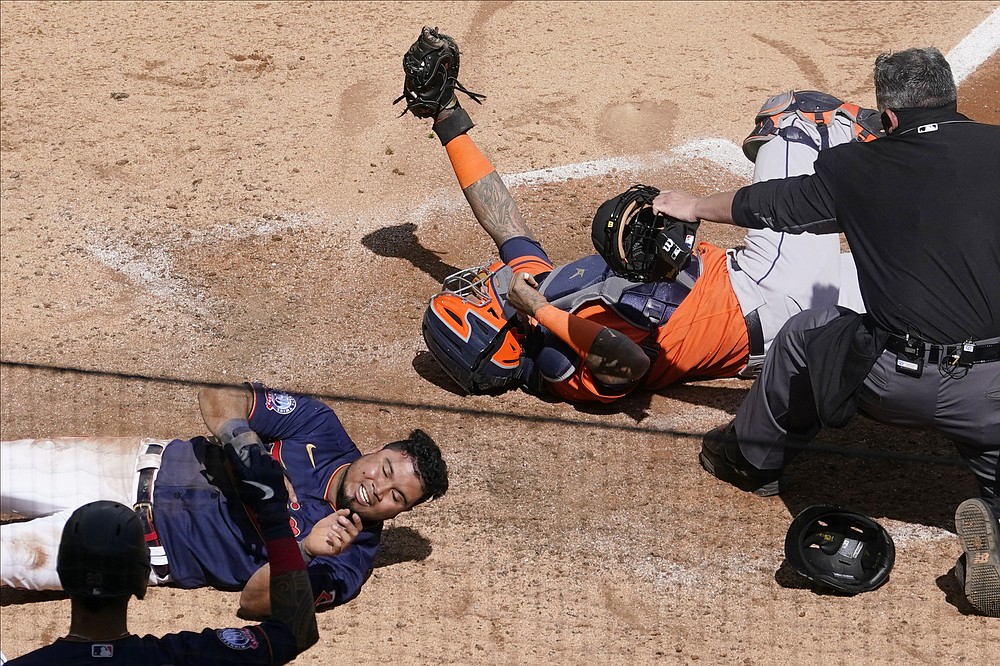 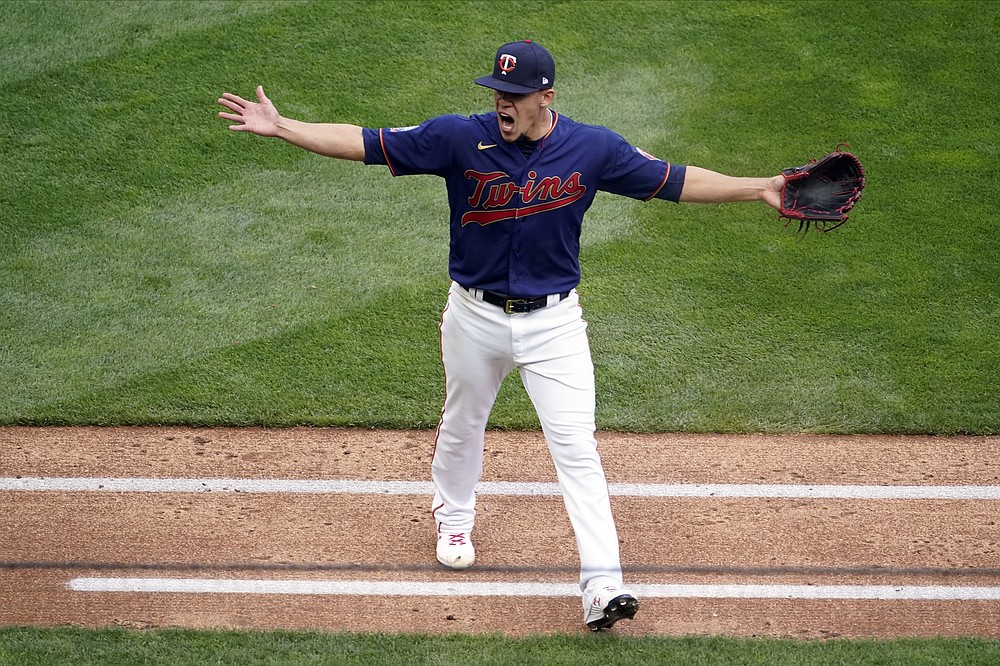 Minnesota Twins pitcher Jose Berrios celebrates an inning-ending out against the Houston Astros in the fourth inning of Game 2 of an American League wild-card baseball series, Wednesday, Sept. 30, 2020, in Minneapolis. (AP Photo/Jim Mone) 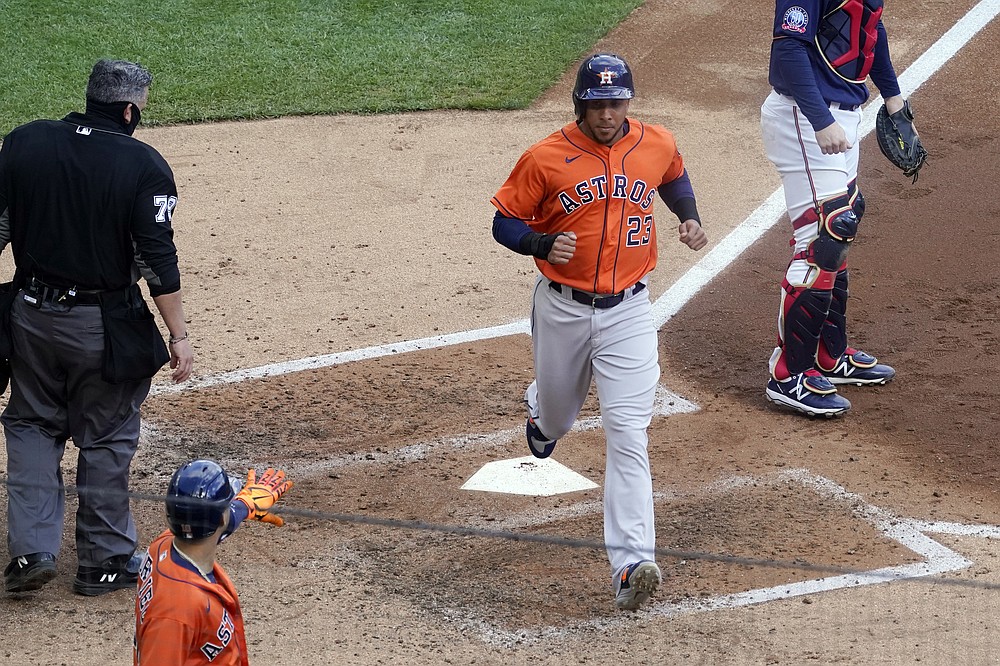 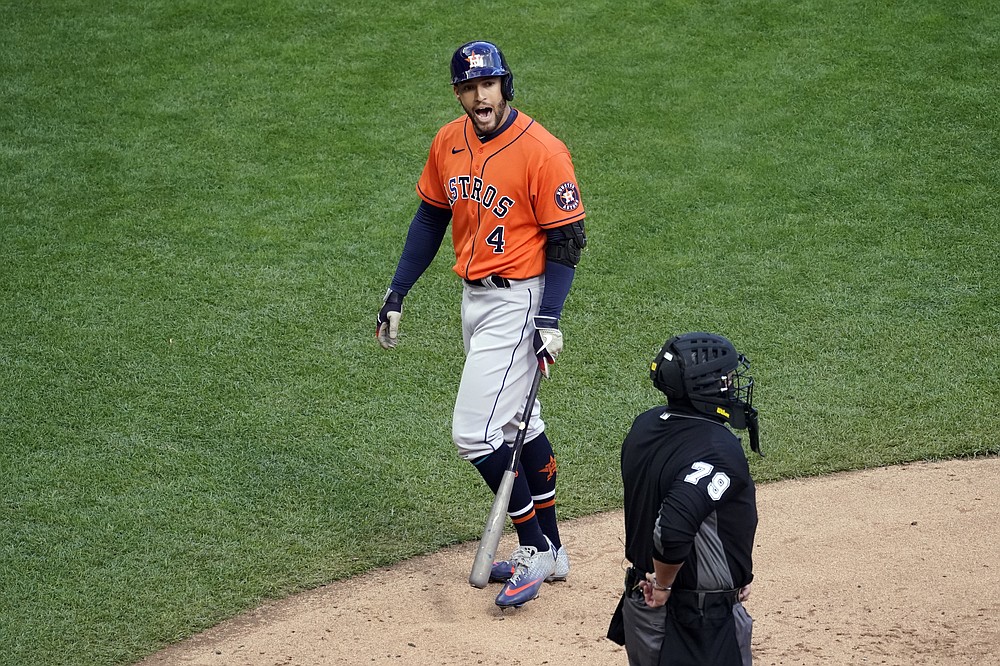 Houston Astros' George Springer, left, has some words with plate umpire Manny Gonzalez after a call strike in the fourth inning of an American League wild-card series baseball game against the Minnesota Twins, Wednesday, Sept. 30, 2020, in Minneapolis. (AP Photo/Jim Mone) 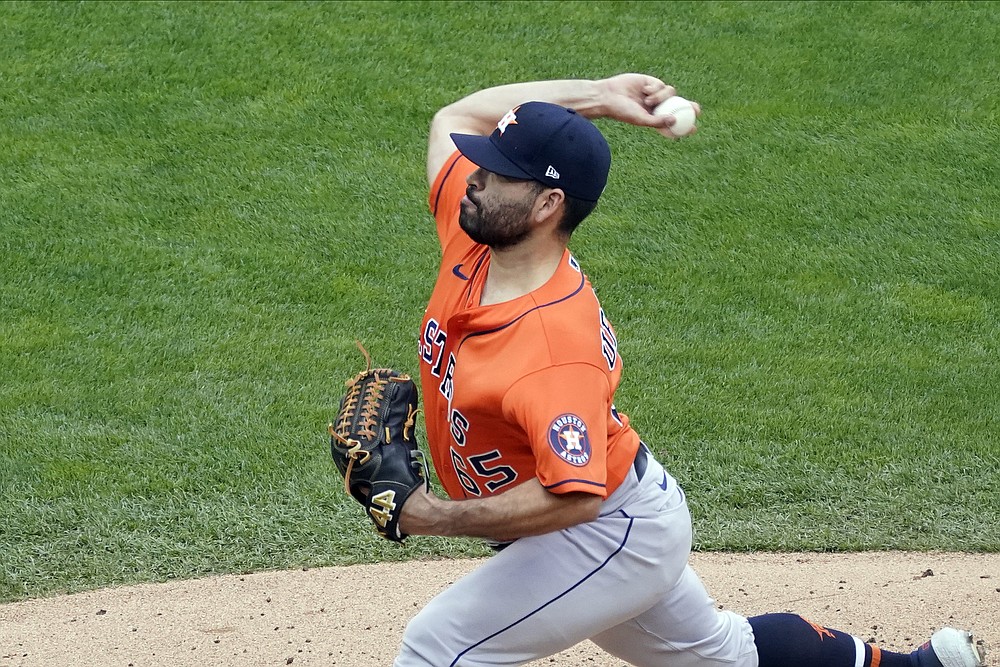 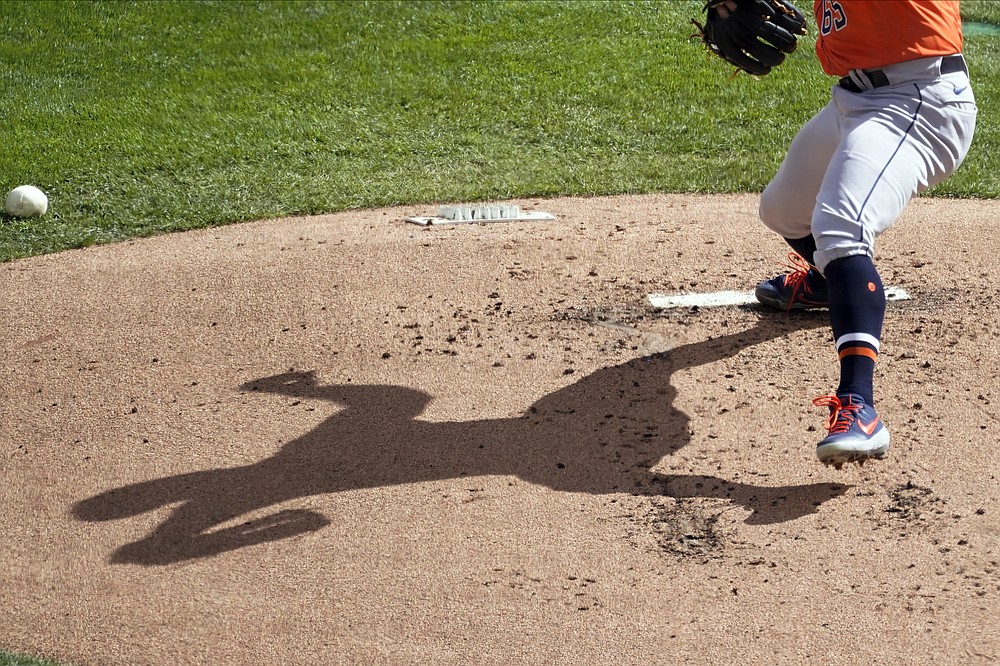