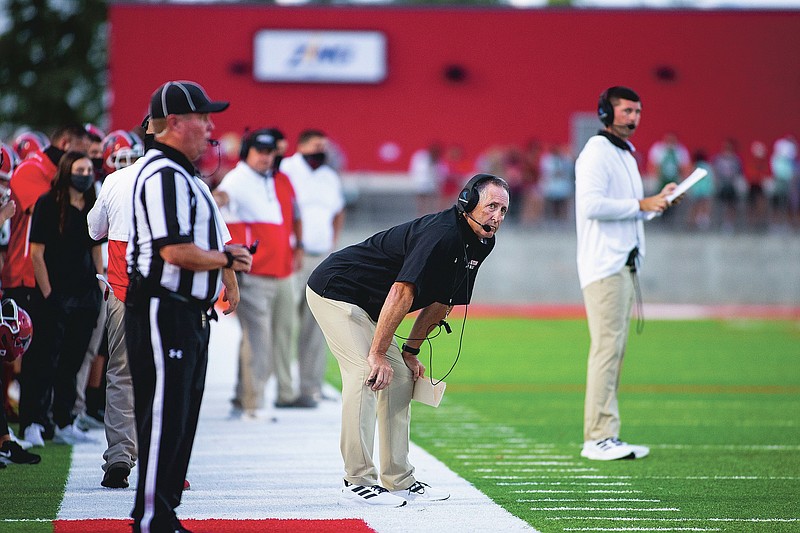 Cardinals back in action

Farmington will not receive a break when the Cardinals return to the field tonight for the first time in three weeks.

Farmington (2-1) will make a nearly three-hour trip today to face Vilonia (3-1) in a 5A-West Conference game. Vilonia has played four games, including back-to-back wins over Russell-ville and Clarksville. Farmington hasn’t played since beating Springdale 14-7 on Sept. 11.

The Cardinals then had a week off before last week’s home game with Harrison was canceled because of covid-19 concerns. Farmington has been cleared to play, although the Cardinals will not be at full strength because of precautionary measures.

“We couldn’t practice last week and it showed,” Farmington coach Mike Adams said. “We were rusty. We’re excited for the chance to play again but this is a whole new challenge. We’re just trying to piece things together.”

Vilonia crushed Farmington 49-21 last year behind running back Draven Smith, who ran for 233 yards and three touchdowns on only 12 carries. Smith is now at Henderson State but the Eagles return several top players from a team that was picked second behind Harrison in a preseason poll of the league coaches.

Vilonia has a veteran offensive line to protect quarterback Austin Myers, who completed 21 of 25 passes for 228 yards and one touchdown in a 35-28 victory in overtime against Clarksville last week. The Eagles maintain a strong running game with junior Seth Kirk, who ran for 160 yards and five touchdowns past week.

“(Myers) is 6-foot-4 and he can really throw it,” Adams said. “They’re a fast-paced team with four seniors on the offensive line and a bunch of skilled players who are hard to tackle.”

Farmington is led by running back Caden Elsik and receiver Devonte Donovan, who has 16 catches for 139 yards and two touchdowns in three games.

Tigers pull away in 2nd half

Charleston coach Ricky May wanted to take credit for his team’s strong second-half performance last week, but he pointed to directly to his players.

“We as coaches like to think it was something we said at halftime, but it wasn’t,” May said. “I think we scored on all but one possession, intercepted two passes and recovered a fumble that we took back for a touchdown.

“The first half was nip and tuck. We fumbled on the second play. We threw an interception on our end and they scored. We didn’t line up right and that led to a big play. In the second half, we kind of got the momentum and just rode it out.

Sophomore Brandon Scott enjoyed a big night, too, accounting for more than 230 yards of åtotal offense and three touchdowns. He completed 8 of 13 passes for 121 yards and two touchdowns and rushed for a team-high 115 yards on 17 carries and a touchdown.

Greenland pulled within 20-18 with 3 minutes, 42 seconds left in the third quarter. But Charleston came right back 21 seconds later to start that 28-0 run to finish the game. Scott connected with Bryton Ketter on a 31-yard scoring strike.

Charleston now travels to undefeated Cedarville in a clash of two of the top teams in the league.

The Dragons picked up their first win of the season 20-6 over Johnson County Westside last week, but they were just glad to be playing after having games canceled the last two weeks because of covid-19 concerns.

“Lavaca called me two weeks ago on game day and then the next week Hackett called on Thursday,” Mountain-burg coach Tom Harrell said. “We’ve had a couple scares (with covid) but so far we’re OK.

“We made a lot of mistakes but the effort was there. We’re playing a lot of sophomores. Four of our five starting offensive linemen are sophomores. But they’re the best we’ve got. It was kinda like playing the first game all over again. It may be that way this year. Who knows?”

Junior Noah Johnson rushed for 236 yards and a touchdown for the Dragons (1-1, 1-0 2A-4), who lost their season-opener to Cedarville on Sept. 4. But Harrell was especially pleased with his defense’s performance.

“We kept them out of the end zone until the fourth quarter,” Harrell said. “We fumbled the kickoff and held them. Then we ran one play and fumbled again it back to them and held them again.

“In 2A football so many go both ways, whenever you turn it over and they get on defense and they’ve got the dauber down. They don’t play with the same confidence and intensity after a turnover. So I was proud of how the intensity they had.”

Mountainburg travels to Magazine (1-2, 0-1) on Friday in a key conference game.

Defense steps up in shootout

Gentry coach Justin Bigham said he told his team to treat the fourth quarter of Friday’s game against Huntsville like it was “a 0-0 game,” even though the Pioneers had a 27-20 lead at the time.

“We tell them at practice to win every day,” Bigham said. “Then in every game, we want them to win every quarter.”

While the final score had the appearance of an offensive shootout, it was Gentry’s defense that rose to the occasion and helped the Pioneers claim a 46-34 victory in the 4A-1 Conference opener for both teams.

Bryson Walker started Gentry’s fourth-quarter heroics with an interception that set up Zac Jarnagan’s 20-yard touchdown run and made it a 34-20 game with 10 minutes, 20 seconds left to play. Jonah Summers then sealed the victory when he returned an interception 45 yards for a score and gave the Pioneers a 46-27 cushion with about a minute remaining.

“Our defensive staff did a good job of coming up with a plan for our team to make plays,” Bigham said. “We wanted to stop Huntsville from what they did well and get them out of their comfort zone.”

Joe Adams and Zac Withrow were pressed into starting roles on Pea Ridge’s offense after a pair of starters went down with season-ending injuries.

Both of them were vital in rallying the Blackhawks to a 35-28 victory over Alma in their 5A-West Conference debut. Adams tied the game at 28 with his 4-yard touchdown run, capping a 95-yard scoring drive that included Withrow’s reverse 45-yard flea-flicker pass to Kayden Rains.

Adams, who recovered a fumble to set up the game-tying drive, then scored on a 20-yard run with 2 minutes left after Pea Ridge’s defense stopped Alma on a fake punt attempt near midfield.

“We’ve had to overcome some injuries,” said Black-hawks coach Jeff Williams. “Joe Adams and fullback Carlos Martinez have done a good job running with the ball, and Zac has thrown the ball well the last two games.

“They have accepted their roles, and that has been part of the process.”

Pea Ridge (1-3, 1-0) won despite allowing a school-record 287 yards rushing by Alma tailback Logan Chronister. Williams pointed out that his team had four turnovers in its season opener against Shiloh Christian, but none in its last two games.

“I know we gave up a lot of yardage,” Williams said. “But our guys made the plays we needed to make in order to win the game. The bottom line is they turned the ball over and we didn’t.

“Winning that first conference deal is a good deal, and I’m happy for our team. Our first three games were used as building blocks toward preparing for the 5A-West. But we only enjoyed the win for about 24 hours because it doesn’t get any easier this week with Morrilton.”

Mena was in danger of losing to Waldron on Friday for the first time since 1993.

Then, a miracle happened.

On the final play at Waldron, senior quarterback Max Montgomery threw a 45-yard touchdown pass to classmate Gaven Hooper to stun the Bulldogs 28-21 as time expired.

“We had been in max protection,” Bentley said. “On the last play, we wanted to use sideline to sideline and spread out our receivers. Our offensive line did a great job of protecting Max. Our senior quarterback steps up and makes that throw. Gaven had to run it in.

“It was super exciting to watch.”