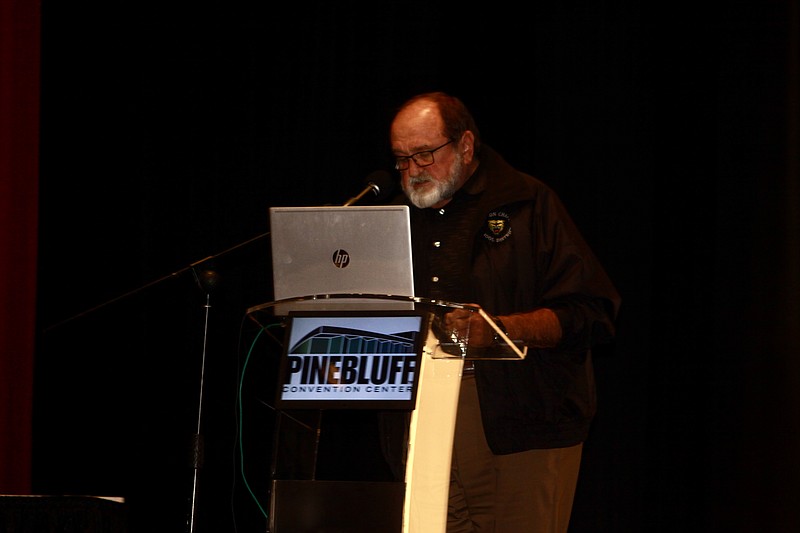 Teachers, administrators and superintendents were in attendance, offering different reactions to the idea of consolidation and the transparency that the data presented.

Former Dollarway school board member Charles Gurley said Dollarway wanted to stay as it is.

"I don't think consolidation will solve the problem," said Gurley, who graduated from Dollarway 41 years ago.

Jerry Guess, superintendent of the Watson Chapel School District said before the program began that he did not favor consolidation and had the strong support of community members.

[Video not showing up above? Click here to view » https://www.youtube.com/watch?v=BNwhcij6hbU]

"I have heard from a lot of teachers that are concerned about forced consolidation," Guess said. "The teachers and sports staff do not support it, so I think it is almost a universal position to Watson Chapel that they opposed consolidation."

Watson Chapel board member Sandra Boone said she was interested to know why Watson Chapel was included and not White Hall.

"Watson Chapel has not been sanctioned by the state, either academically or fiscally, so I don't understand why we would even come into play ... if they want to make a consolidation, then it should be a consolidation of the entire Jefferson County and that includes White Hall," she said. "I'm still not for it. I'm still totally against it. If it's going to be a consolidation, it needs to include all. Be fair."

White Hall data was presented that showed the district increasing in the areas where the other school districts were failing. Go Forward Pine Bluff CEO Ryan Watley addressed why White Hall was left out of the consolidation.

"Some of the components of the study deal with areas of challenges and why school districts consider consolidation," Watley said. "White Hall is not facing challenges at this time, but we saw a decline in revenues, enrollment, and academic performances across all three districts."

Pine Bluff/Dollarway Superintendent Barbara Warren said she felt that some of the data presented was in error, not the fault of the presenters, but of the data source .

"There were a few data sets that weren't accurate, however I don't fault them because when you go on the department's website (Department of Education) and you get that information, it's subject to some challenges," said Warren. "I'm actually aware of a lot of that because we as superintendents connect with one another."

Warren said the superintendents meet regularly, and once a month they have a board meeting. She also said that as a former co-op director she was already connected to the data of the schools in Arkansas and in Jefferson County.

"The problem is there is no context with the data," said Warren. "It's alarming, much if it is true, but several things were not."

Warren also mentioned how there were no current administrators on the panel, but Watley said having them would present a potential conflict of interest with individuals serving in the school district.

"We did have alumni represented for each one of them," said Watley. "We needed the focus of unbiased to make that decision."

Guess said the focus of the study should have also included the racial composition of enrollment in the school districts within Pine Bluff, calling it "ignoring the elephant in the room."

"K-12 public education in Jefferson County is not merely segregated by race, it is highly segregated," said Guess.

According to Guess in the 2019-20 school year, there were 6,808 Black students attending K-12 public schools in Jefferson County. Of those, 5,543 attended Pine Bluff, Dollarway and Watson Chapel schools.

Guess said that while Watson Chapel may be a marginally performing district, it is performing better than Pine Bluff and Dollarway districts.

"I do understand that Watson Chapel, when compared to Dollarway and Pine Bluff High is better but when we are assessing ourselves and evaluating ourselves we do not compare ourselves to people or situations that are worse than," said Alderman Joni Alexander, a member of the consolidation study group. "When you look at Watson Chapel's stats compared to the state of Arkansas, they are declining as well, headed in the same direction as our other two districts."

Watley said he is not surprised by Guess's response and that he has solid ground to stand on.

"I've had a prior conversation when we met with the superintendents that we were going to do this study and he brought this up then," said Watley. "I'm not surprised that he went and done some further research but overall the city of Pine Bluff is struggling as far as student performance and so those things do not address the academic ability to provide a competitive education for our students."

Warren said she is vested in the community and her approach will be from every angle.

"I'm looking at it as a community that I am raising my children in -- the community that I try to live my life in," said Warren. "I support multiple school districts and have made a point to give and to be here. I have multiple reasons why I am vested, care, and have concerns."