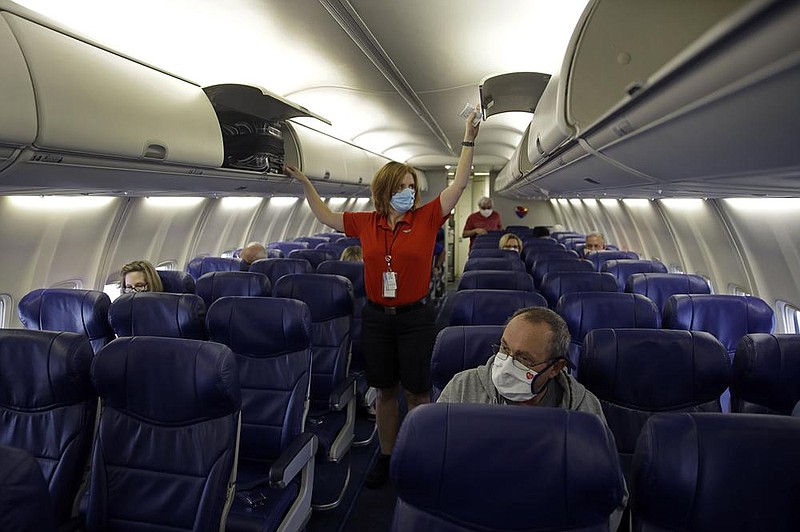 A Southwest Airlines flight attendant prepares a plane for takeoff in May at Kansas City International Airport in Kansas City, Mo. The airline plans to begin offering service between Little Rock and Atlanta. (AP)

Southwest Airlines will soon begin direct service between Little Rock and Atlanta, giving passengers an alternative to Delta Airlines, which has dominated the route at Bill and Hillary Clinton National Airport/Adams Field.

The airline will have one daily departure and arrival starting Nov. 5, the airport said in an announcement posted on social media.

The new service comes as the nation's air travel industry struggles with a dramatic plunge in passenger traffic as a result of the coronavirus pandemic.

The state's largest airport and its carriers have felt the impact.

Delta once had as many as seven daily departures between Clinton National and Hartsfield-Jackson International Airport before the pandemic almost shut down air travel in March. Now, the airline has three daily departures.

Southwest Airlines, however, has pledged to avoid any furloughs or job cuts through the end of the year.

While 4,400 employees took a voluntary separation package and another 12,500 took extended time off, Southwest said it has the personnel and aircraft to add service where it sees a need. Atlanta, one of the world's busiest airports, is Delta's largest hub and the airline's headquarters.

And while Southwest insists it uses a point-to-point system rather than the hub-and-spoke system that other major airlines have adopted to move passengers, Boyd said that, in Atlanta, Southwest acts as a connecting carrier.

"They see a value," he said. "It's just not Little Rock-Atlanta, it's Little Rock to connect people in Atlanta, which is what Delta is doing."

Travelers should not expect to see a price war, Boyd said.

"There's this idea that if Southwest goes in, fares plummet," he said. "They will probably go down but they're not going to plummet to $50 a shot. As a matter of fact, in many markets Southwest is at or above the competition."

Delta may have adjusted its fares downward in response to Southwest's entry into the market.

Southwest, meanwhile, is charging $315 for its cheapest ticket, according to its website.

"They know they can fill there airplanes because they treat passengers somewhat like human beings," Boyd said. "That's fact. There's clearly less anxiety flying them. They don't have change fees. They don't zap you every time you turn around. They make it easy to fly, which is why they fill their airplanes. And they can get, in some cases, a premium."

Southwest will use the Boeing 737 on its new route. Delta is using the smaller Boeing 717.

"It would be very, very positive for Little Rock," Boyd said. "There's no downside for anybody."