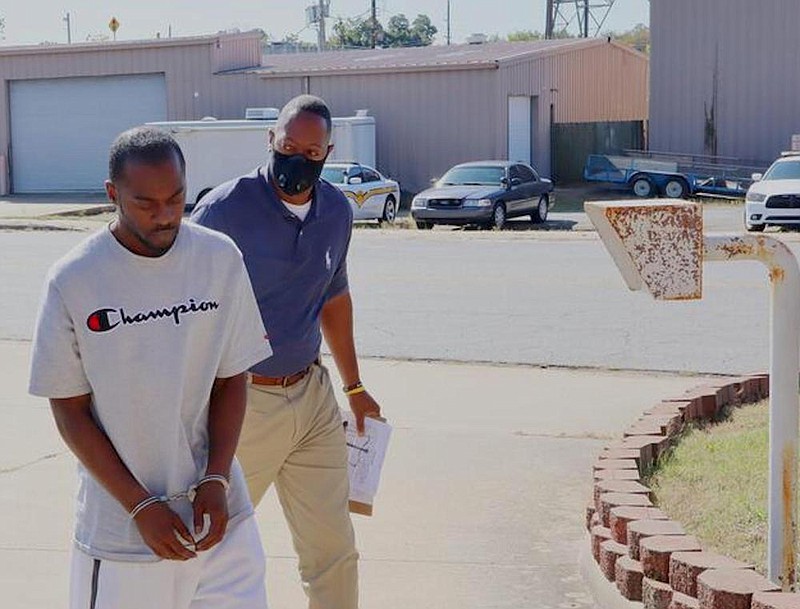 Bryant Lamont Smith, left, is escorted in the W.C. “Dub” Brassell Detention Center by Jefferson County sheriff’s office Capt. Yohance Brunson after being returned from Kansas Tuesday morning. Smith was arrested Friday in Kansas after a three-week search. (Special to The Commercial)

A fugitive found Friday in Kansas was extradited back to Pine Bluff where he faces felony charges including two counts of capital murder and one count of attempted capital murder in shootings at two locations Sept. 3.

Bryant Lamont Smith, 33, who was wanted by the Pine Bluff Police Department in the shooting deaths of Kavon Mitchell, 20, and Emonya Moten, 17, was arrested Friday in Parsons, Kan., in a multiagency operation including officials from the U.S. Marshals Service, Kansas Highway Patrol, Labette County sheriff's office, and the Parsons Police Department. A news release from the Jefferson County sheriff's office said law enforcement officials in Kansas received a tip about Smith's whereabouts and he was arrested and taken into custody after a traffic stop near a gas station on Parsons' Main Street.

"We were called in to assist by the U.S. Marshals Service," Walker said. "He was staying in Parsons with friends, or acquaintances is probably how I'd word it."

Walker did not say how long Smith had been in the area or if he had been under surveillance, but he did say that numerous officers, including at least 10 Kansas troopers, were part of the operation.

"We don't know what's going to happen until it happens," Walker said. "We were aware that he had capital-murder warrants out on him, which heightened our response."

He said Smith offered no resistance when he was taken into custody.

"No, he was completely cooperative," Walker said.

Smith was taken back to Pine Bluff just before noon Tuesday by sheriff's deputies and booked into the Jefferson County jail where he is being held without bail on numerous felony charges.

Prosecuting Attorney Kyle Hunter said Smith was formally charged Sept. 24 in Jefferson County Circuit Court with two counts of capital murder in the shooting deaths of Mitchell and Moten; one count of attempted capital murder in the shooting of Cedric LaPoole, 23; possession of a firearm by certain persons; six counts each of committing a terroristic act; and illegal discharge of a firearm from a vehicle; and two counts of unauthorized use of property to facilitate a crime.

He was scheduled for a first appearance Wednesday in front of District Judge John Kearney, but it was learned once the hearing began that Smith had been picked up that morning by the Arkansas State Police for questioning in another matter. State police spokesman Bill Sadler said he had no information regarding Smith on Wednesday.

Hekeryin Cain, 23, of Pine Bluff, was arrested Sept. 6 on a capital-murder count in Mitchell's death and is being held without bail in the Jefferson County jail.

According to a probable-cause affidavit, Cain, along with Smith, is suspected of involvement in the deaths of both Mitchell and Moten in what police believe is gang-related violence.

The affidavit said police were alerted to Smith's whereabouts when his cellphone pinged on a cell tower in Parsons.

On Sept. 3, after 4 p.m., Pine Bluff police were called to 1704 S. Elm St. after a report of a shooting. When they arrived, they found Moten shot to death outside the residence, and LaPoole, of Pine Bluff, wounded. Police were still at that scene when a report of another shooting at 25 Needles Drive in the Dollarway area came in just before 5 p.m.

There, they found Mitchell, 20, outside his apartment suffering from gunshot wounds in his upper torso. He was transported to Jefferson Regional Medical Center where he died while undergoing treatment.

LaPoole was also taken to Jefferson Regional Medical Center where he was treated for nonlife-threatening wounds and later released.

A probable-cause affidavit said that a witness told police they heard what sounded like fireworks in the vicinity of 1704 S. Elm St., looked back and saw a man hanging out of a greenish-blue Chevrolet Malibu, heard more shots, then saw the Malibu drive away toward Main Street.

The affidavit said the witness drove by 1704 S. Elm St., saw a man lying on the ground, and called 911. While detectives were on that scene, the affidavit said, a call came in about the Needles Drive shooting.

The affidavit said that a security camera in the vicinity of Mitchell's Needles Drive apartment recorded the incident there. It showed two vehicles, a blue Chevrolet Impala with a spare tire mounted on the front passenger side and a dent in the passenger side, and a Chevrolet Malibu pull up in front of the residence with the Malibu in the lead.

The affidavit said the Impala struck the Malibu from behind when the two cars pulled up and that "a couple of people" began shooting at Mitchell from both cars.

The Impala was later found parked in front of a house in the 3400 block of Lilac Street, according to the affidavit.

According to the affidavit, Cain denied involvement in the shooting and told police that he had never driven the blue Impala.

The owner of the Impala told police that she let Cain use the car from 4 p.m. until he returned it an hour later with the front end damaged. The affidavit noted that the shootings at 1704 S. Elm St. and 25 Needles Drive both occurred within the time frame that the vehicle's owner told police Cain was using the vehicle.

The vehicle's owner, when shown video from the crime scene, identified the Impala as hers by the spare tire in the front passenger wheel well and the dent in the passenger door, the affidavit said.

The owner also told police that Smith, whom she identified as her boyfriend, arrived at her home on foot as Cain was explaining how the damage occurred to her car, and, the affidavit said, she told police he did not seem surprised to see the damage and that he would "take care of it."

She said when police arrived on the following day to question her about the car, the affidavit said, she said Smith, who is also known as "9", hid in the attic until the police left, and told her he thought one of the officers was going to try to "pin" something on him.

The affidavit said that she told police Smith kept a large firearm at the residence, and that the weapon had a long, curved magazine and she had heard Smith and other refer to it as an "AK."

The affidavit said that 7.62 x 39 spent shell casings of the type used in the AK-47 rifle were found at both shooting locations.

The affidavit said that on Sept. 11, the owner of the Malibu came to the police station to give a statement, telling police that she had lent the car to Smith about 4 p.m. the day of the shootings and had returned it around 6 p.m., at which time she said she noticed damage to the rear of the car.

According to the affidavit, she told police that Smith had pulled up with three other men in the blue Impala that was used in the homicides, and that Smith gave her keys to one of the men, identified as Rashad Thompson, who drove off in the Malibu, following Smith, whom she said was driving the Impala.

The affidavit said that police believe the shootings are believed to be gang-related, along with a shooting earlier in the afternoon that claimed the life of 69-year-old Horace Harrington Jr. at his residence at 3101 Lilac St. Vernon McCraney III, 18, has been arrested in that shooting and is being held in lieu of $500,000 bond in the Jefferson County jail.

The affidavit said that additional retaliatory acts may have occurred in Pulaski County in the days after the Pine Bluff shootings and that cellphones recently confiscated at the W.C. "Dub" Brassell Detention Center contained text messages that discussed putting out hits on specifically named members or associates of MOB in retaliation for the deaths of Moten and Mitchell.