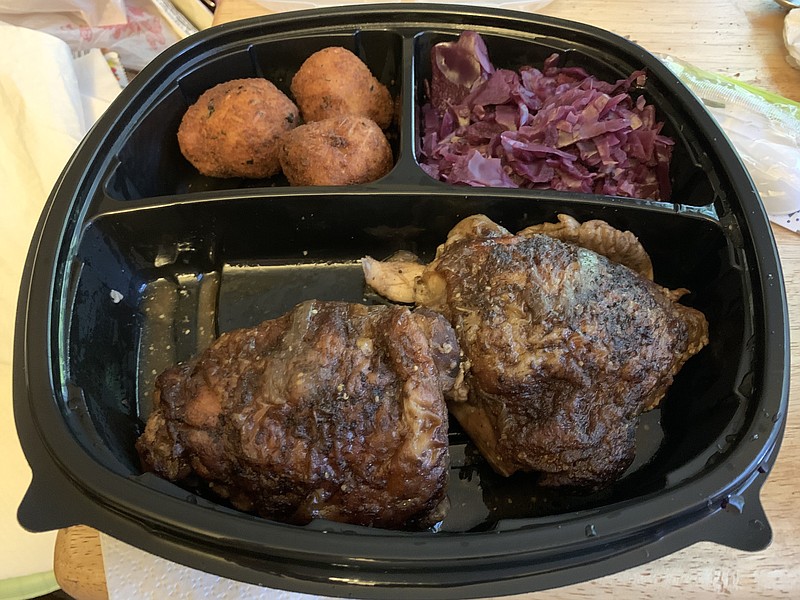 Our focus this week is primarily on places that had been closed for an extended period of time this spring and summer past and have recently reopened. And we’re including a venerable deli where it has been too long since our last visit.

As is our continuing policy, we’re avoiding national chains (you might see occasionally something Arkansas-owned and/operated with multiple outlets, for which we’ll apologize on a spot basis), ordering off existing menus, paying for our food up front and not taking requests for reviews.

This is a new menu item that we ordered because the photo and description on the Facebook page intrigued us. It consists of two enormous and braised bone-in chicken thighs with what the page described as a ground mustard and dark beer pan jus, with what appeared to be onion strings. (It came in a separate container, which puzzled us for a minute until we re-read that description and figured out what it was for: to pour over the chicken.) It comes with three potato croquettes and a nice pile of slightly sweet, slightly vinegary soaked red cabbage. Aside from the size and meatiness, the chicken was good but not exciting (this may possibly be the last time we order based on a Facebook post). What made the dinner a winner was the croquettes, which were round and looked at first glance like actual potatoes, crisp on the outside and fluffy on the inside and really good. And though normally we’d have probably just left the cabbage, we actually enjoyed it.

HOW IT WENT: This Hillcrest branch of The Pantry had been closed for several months, but recently reopened for takeout only. We placed and paid for our order by phone and a masked-and-gloved server brought it out to our car.

HOW IT’S GOING: There was one other in-car delivery in progress when we arrived. 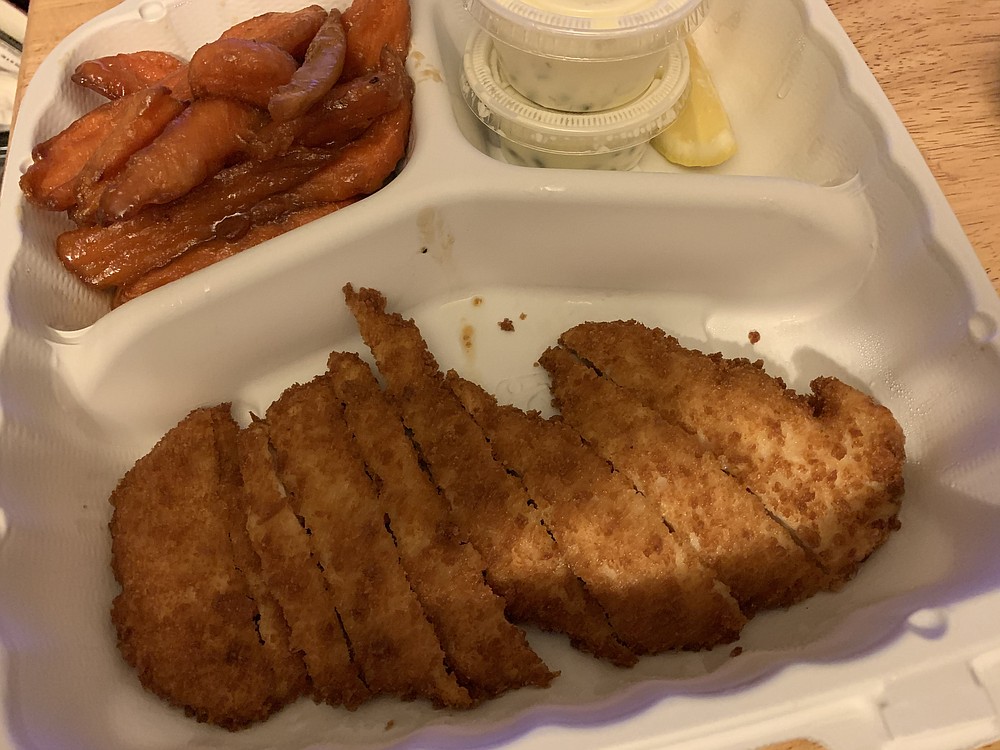 The menu at the recentlly reopened Red Door, where Cantrell and Old Cantrell roads meet in Riverdale, includes a number of Italian dishes left over from its predecessor, Bene Vita, including this chicken piccata, with a side of sweet potato wedges. (Arkansas Democrat-Gazette/Eric E. Harrison)

Red Door, which has also recently reopened after several months, has re-instituted its entire menu, more or less (there’s a message on the website noting that “availability of some supplies is still an issue”), which includes many residual items from Bene Vita, Mark Abernathy’s Italian restaurant that previously operated in the space. (History lesson: it was, for many years, a Steak & Egg kitchen and subsequently the original home of Brave New Restaurant.) We went first for the Bene Vita Meatballs (small, $13, big $18), a longtime favorite, but they were out that night. (“Availability of some supplies” etc.) So we defaulted to the second choice, which turned out to be a lightly coated-and-fried chicken cutlet, cut into thin strips, with side cups of a pourable thin, white lemon beurre blanc, with plenty of capers and what might have been onions, might have been leeks. We enjoyed it, but we’d rather have had the meatballs. We ponied up an extra and worthwhile $4 for a generous side of brown-sugar-roasted sweet potato wedges. The winner in this dinner was the appetizer: four large full-lunar pasta pockets filled with a slightly sweetened, gooey cheese mixture and a big old plastic tub of tangy, chunky marinara in which to dip them.

HOW IT WENT: We first planned to grab something for Sunday brunch, but after several failed attempts to get through on the phone, we tried showing up and ordering in person — only to be told that, due to customer volume, they just weren’t doing to-go orders. (That was fixed by the following Sunday.) When we finally managed to get a dinner order in, our food was easily ready in the 15-20 minutes we were told it would take and it came in “earth-friendly” clamshell containers and a reusable/recyclable brown-paper bag. We paid at the bar.

HOW IT’S GOING: The dining room and patio were crowded for Sunday brunch. The dining room was busy — though not the patio, which was being rained on at the time — on the weeknight when we picked up our dinner. 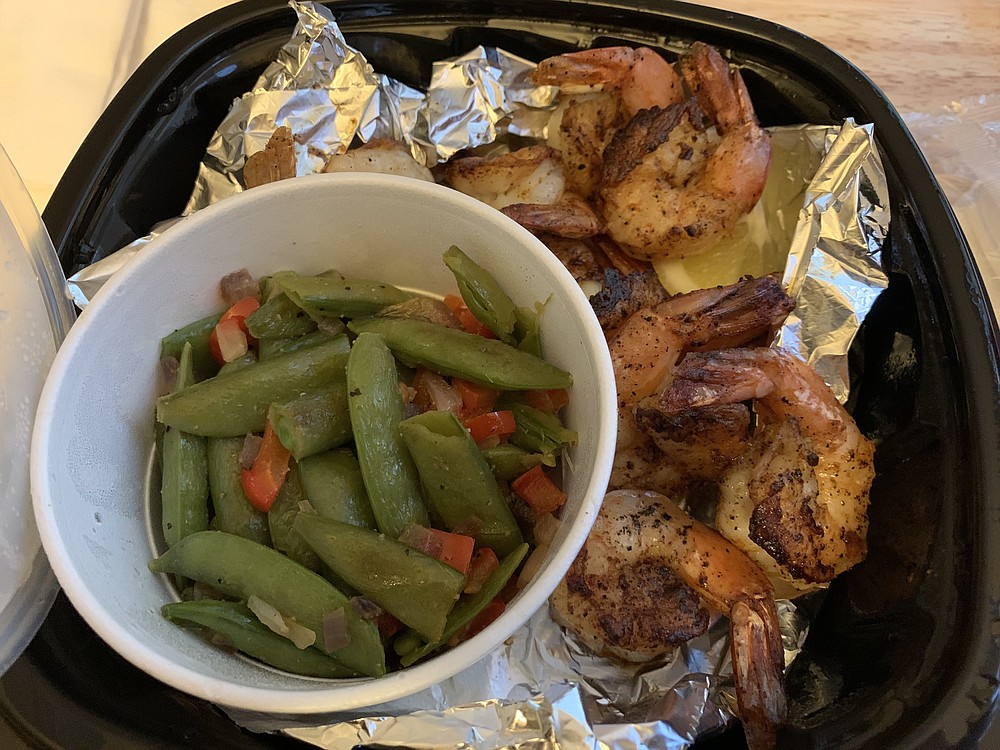 There were 10 grilled shrimp in our order from Samantha's Tap Room and Wood Grill, which recently reopened on Main Street in downtown Little Rock. A side order of sauteed sugar snap peas dressed up the to-go container. (Arkansas Democrat-Gazette/Eric E. Harrison)

WHAT WE GOT: Grilled Gulf Shrimp ($14) with lemon and oregano.

Samantha’s, too, recently reopened after staying closed longer than most of its neighbors in the 300 block of Main Street. (Bruno’s Little Italy, more or less next-door, continues to operate successfully, as it has throughout the pandemic, with curbside pickup only; Alsopp & Chappell, across the street, has remained closed “temporarily” since mid-March.) The still-limited menu includes this dish, 10 medium-size shrimp grilled to near perfection; there might be a little lemon involved, and if not, a lemon wedge came on the side (we didn’t need it). That, however, was all there was; without the $4 side of sauteed sugar snap peas we had the foresight to order, those shrimp would have looked pretty lonely in the black plastic to-go container, and we would have definitely felt un-full and unfulfilled.

HOW IT WENT: We placed and paid for our order at the bar. At first, the bartender poked a QR code at us for contactless ordering, but we had to explain that while, yes, we know how that works, we don’t, er, know how to work it. So the bartender fished out a physical menu. We paid, and tipped, the bartender. Our order took about 10 minutes, maybe less.

HOW IT’S GOING: Samantha’s was very busy, with patrons waiting for the limited number of tables inside and on the patio, about an hour into the dinner process. 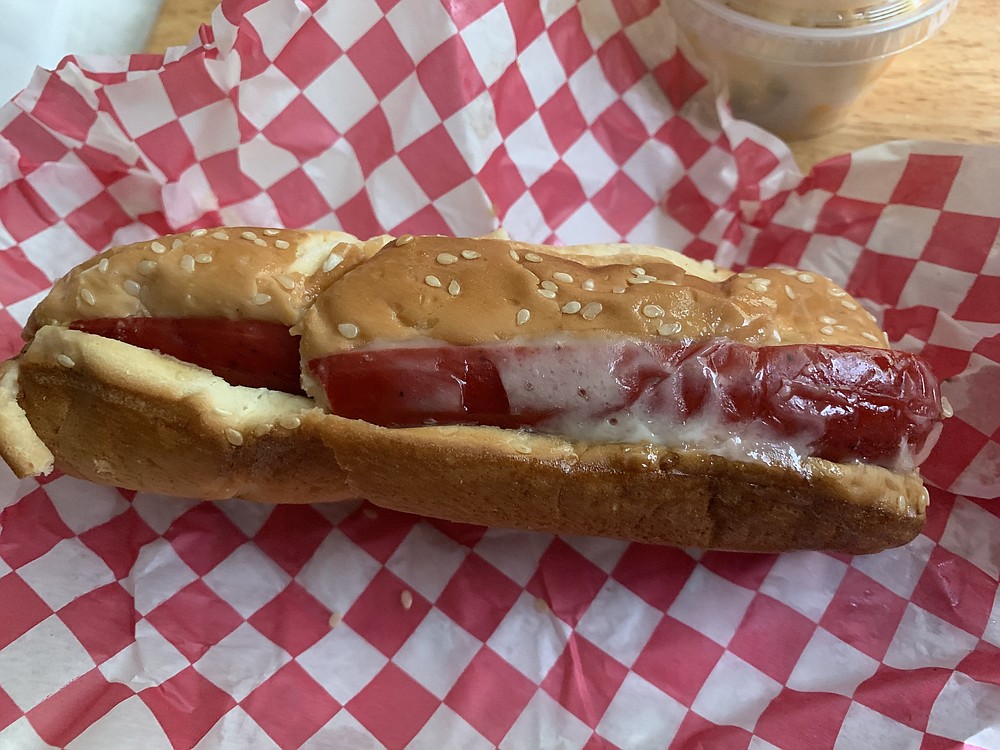 The German Delight, a long-time favorite from Terri-Lynn's BBQ & Deli, isn't as messy as it used to be, now that it's in a hot-dog roll and not a short, soft bun. (Arkansas Democrat-Gazette/Eric E. Harrison)

Terri-Lynn’s has been around here longer than we have — since 1959, in fact — and used to have two locations, the other being at 7700 Cantrell Road (which is now, we’re told, a nail spa). We started grabbing sandwiches from the Rodney Parham location in the late ’70s, and our consistent favorite was this heartburn-waiting-to-happen sandwich, which the menu now lists among the specialty dogs. It’s a hot link, which previously was stuffed into a soft deli roll, but which now is closer to an actual hot-dog roll, topped with melted Swiss, sauerkraut, mayonnaise, horseradish mustard and slaw. It’s not nearly as messy as it used to be — the roll is longer, and there’s less sloppy stuff — and while it’s still good, it just isn’t nearly as much fun now that there’s little or no risk that some of the mayo-kraut-slaw-mustard mixture isn’t going to drip out of one end or the other onto your clothing. (There’s also a Polish Delight, with a Polish sausage. We’ll go back for that one of these days.) This is also one of the relatively few places we know of that offers deviled eggs, which they do excellently with a tiny bit of pickle relish in the whipped egg mixture, just enough to give it a little character. Something else for the next day: We forgot they have tamales.

HOW IT WENT: We ordered and paid over the counter; it took about 10 minutes to produce our order.

HOW IT’S GOING: The kitchen was busy late in the lunch cycle producing orders for the couple of occupied tables in the partially open dining room, the couple of tables on the sidewalk and orders for pickup, which we were headed out the door in vast numbers while the phone rang more or less nonstop. If you’re looking things up online, the Web page needs updating — prices have gone up since the menu was last posted and the newest customer reviews are from 2011.