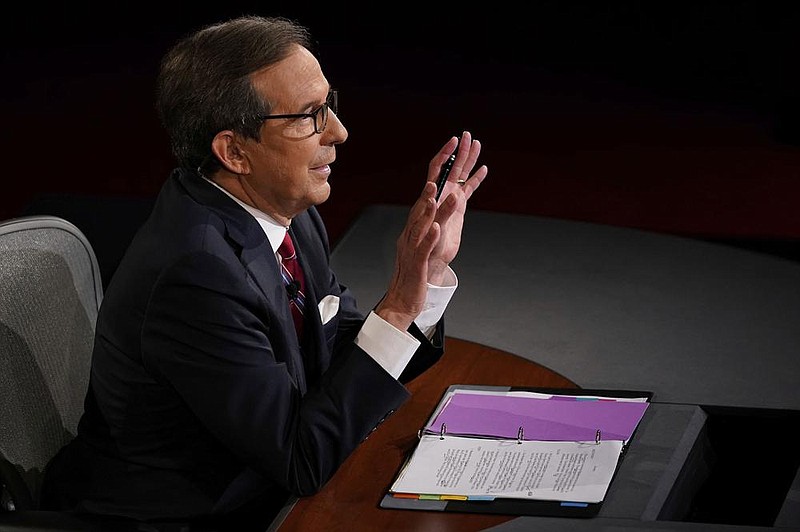 Area Democrats and Republicans watched the first presidential debate between Republican President Donald Trump and Democratic Ppresidential nominee former Vice President Joe Biden on Tuesday night, concluding that the proceedings fell somewhat short of "presidential" as the event went off the rails and never seemed to get back on track. Questions of who was to blame for the debacle and who performed best, however, seemed to fall directly along party lines.

The Pine Bluff Commercial asked four people, two Democrats and two Republicans, to discuss their overall impressions of the event. Republicans Curtis White of White Hall and Mike Creekmore of East End, and Democrats Irene Holcomb and Earl Mays, both of Pine Bluff, agreed to watch and to provide their thoughts.

White said going in that he planned to cast his vote for Trump and that nothing he saw Tuesday night gave him any reason to reconsider his choice.

He said it was true that Trump started early in the debate interrupting, mocking and insulting his rival, "he had the right to come out swinging."

White said that he felt like Trump was able to get in a number of details about his plans for a second term but said Biden's remarks were short on substance.

"Biden didn't have much to lean on," he said. "He got a few things in that didn't go along with the questions being asked but he did come something in about the [Affordable Care Act] coming up before the Supreme Court."

"The first thing was about the Supreme Court," White said. "Trump said, and it's true, elections have consequences and the Dems would do the very same thing if they could."

He noted that, as has been pointed out numerous times, that presidents are elected for four-year terms, and because of that, Trump was entitled to pick a Supreme Court nominee to replace the late Justice Ruth Bader Ginsburg.

"The Democrats are just whining," he said.

White was asked if, with that in mind, should former President Barack Obama's choice of Judge Merrick Garland in 2016 to replace the late Justice Antonin Scalia nearly a year before his final term ended should have received a Senate hearing, he said the Republican-controlled Senate was within its rights in refusing to bring the matter to a hearing.

"Who was in control of the Senate at the time?" he said. "They could delay it as long as they wanted to because that's what they have the right to do."

Asked if he would have the same opinion were the positions reversed, White chuckled.

"Yeah, probably," he said. "You know it's all just politics."

Holcomb said going in to the debate that Biden was her choice for president and following the debate, she said nothing had changed. She characterized the tone of the debate as chaotic and out of control.

"It was unlike any debate I've ever watched," Holcomb said. "And I've been watching debates since Nixon debated Kennedy. It was certainly different."

While the debate itself was a chaotic affair, Holcomb said, she found much to like in Biden's performance, which she said was "statesmanlike," despite the overall tone.

"I thought he outperformed the expectations that were set for him," she said. "Not only did he look good but he spoke well, he was engaging, and he spoke directly to the people about the kitchen table issues we care about -- quality of life issues."

Holcomb said in her view, Biden won the night on issues while, she said, Trump dominated on bluster.

"He might have some decent ideas," she said. "But he was abusive and disruptive through the whole thing. It kind of clouded over any ideas he might have had."

Creekmore, who said he is a solid supporter of Trump, said he thought that the moderator, Fox News anchor Chris Wallace, showed a bias against Trump, and said he asked the president tougher questions and was stricter on Trump than Biden for interrupting.

"That may just be how I viewed it though," Creekmore said. "Both men interrupted each other but it seemed to me that Wallace called the president on it more than the vice-president."

Overall, he said, he gave both candidates and the moderator low marks for the conduct of the debate.

"I thought it was one of the most unprofessional things I've ever seen on the part of both candidates and the moderator," he said. "I wasn't really impressed in the debate in general as far as giving out good information. I didn't come away knowing anything I didn't already know."

Regarding a question asked toward the end of the debate on whether each candidate would refrain from declaring victory prematurely, Creekmore said he is mostly in agreement with comments Trump made about mail-in ballots.

"I do have concerns about mail in ballots," Creekmore said. "I think some states are not going to be prepared."

He said overall, he thought the debate was of little value for anyone seeking to know the positions of the two candidates.

"The debate was so chaotic that I think an undecided voter before the debate would still be undecided after the debate," he said. "Some people may have thought it was entertaining but I didn't. I would have preferred to have heard more on the issues. Maybe next time but I'm not counting on it."

"It was more of a joke to me," he said of the debate. "They didn't have any way to silence [Trump] when he got started."

He said if asked to assign a letter grade to the participants, both candidates and the moderator would get an "F".

"I'm from the old school and I've done some debating in my life," Mays said. "In debate, you always give the other guy the chance to express his point of view. The president didn't live up to the rules of the debate."

He said his opinion is that Biden has a plan for the country that he attempted to lay out during the debate but that he had trouble getting his message out through the barrage of interference being laid down by the president.

"What [Biden] was trying to lay out last night I believe would help the U.S." he said. "I think the president was just being divisive and not telling the truth."

Mays said any actual points the candidates may have intended to put forth about their campaigns were lost underneath the the shouting, interruptions, insults and rancor.

All four, regardless of party affiliation, agreed that the debate was a chaotic mess and that little valuable information was gained from watching it. Each person confirmed that their choice for president was made prior to the debate and that nothing in the debate caused them to question their choice.