10 to watch for at New York Film Festival 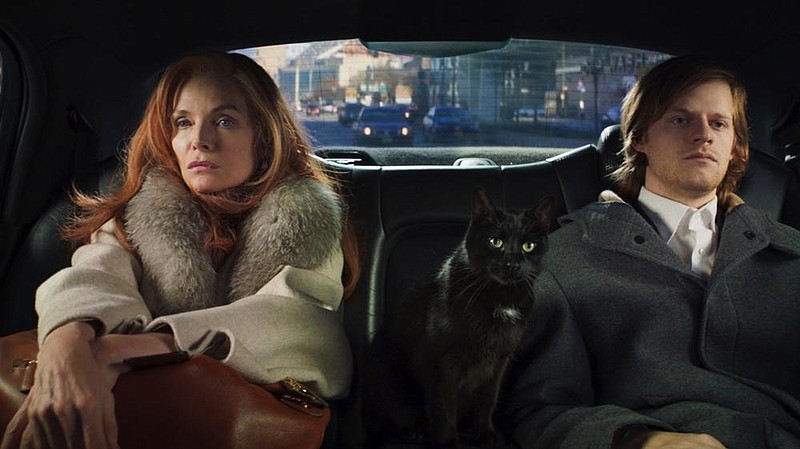 Frances Price (Michelle Pfeiffer) is an imperious, widowed New York socialite who, having exhausted her once vast wealth, escapes to a friend’s vacant Paris apartment with her son, Malcolm (Lucas Hedges), and their cat, Small Frank (voiced by Tracy Letts) in Azazel Jacobs’ “French Exit,” screening at next week’s New York Film Festival.

The idea of staging a fall film festival in New York, the original U.S. center of the covid-19 pandemic, as the virus is still rampaging through the country, sounds daunting but it's not without precedent for the city to utilize film as a kind of healing force.

Back in 2002, the Tribeca festival was begun by Robert De Niro and others as a means of bringing life back to the financial district in the devastating aftermath of the 9/11 attacks, a way of affirming normalcy in an area for which "normal" still felt a great distance away.

Mind you, much like the Toronto International Film Festival, the vast majority of the New York Film Festival itself will be virtual (with some special drive-in screenings) for its Lincoln Center patrons, as well as the press, but that's still vastly better than nothing. It also plays a bit better with the standard New York Film Festival scheduling format, which features roughly the same number of selections (about 25) for their Main Slate as usual.

To that end, this year's lineup features a strikingly diverse selection of features, some of which are making their world premieres. Herewith, our picks for some of the more hotly anticipated entries:

• "Beginning" The buzz on Georgian director Dea Kulumbegashvili's debut film is strong, and the premise is certainly interesting: In a remote village outside of Tbilisi, a family of Jehovah's Witness missionaries experience arson, police brutality, and sexual brutishness at the hands of the natives, as seen through the perspective of the wife and mother, who's experiences lead to a deteriorating sense of faith.

• "Damnation" As part of the festival's "Revival" section this year, a new 4K restoration of Béla Tarr's 1988 film, his first collaboration with the novelist László Krasznahorkai (the same team who would bring us Tarr's masterpiece "Satantango"six years later), plays like a sort of Hungarian naturalist Noir, with a story involving a feckless loner trying very hard to send the husband of his paramour, a nightclub singer, away so he might have her to himself. Expect long, meditative shots of muddy fields, empty desiccated streets, and endless rain.

• "Days" For his first film in seven years, Taiwanese director Ming-liang Tsai again features his muse, Kang-sheng Lee, as a lonely man needing medical help for a long-held condition, who somehow meets a younger Laotian from Bangkok. The two share a cathartic tryst as a release from the pain and alienation they feel. The highly restrained Tsai reportedly utilizes his spare, prosaic style, exerting a methodical pace, and stunning composition to achieve his emotional ends.

• "French Exit" This year's closing night film comes from Azazel Jacobs, and features Michelle Pfeiffer, enjoying a very welcome career rejuvenation in recent years, as a formerly wealthy New York socialite whose financial insolvency forces her to abandon the city for Paris, with her son (Lucas Hedges), and fanciful cat (evidently voiced by Tracy Letts). Satire, we can feel your warm, squishy embrace.

• "Gunda" This one, I approach with real trepidation -- a documentary about the titular sow on a Norwegian farm, giving birth to piglets, and the lives they live in their first days -- but from all accounts, Viktor Kosakovskiy's meditative exploration of animal life in this rural farm is a celebration of life, not a miserable dissection of the farm's inherent cruelties. Obviously, we all understand the eventual fate of these creatures, and for those of us who care, the film might still be fraught, but it sounds like a respectful, pastoral type of experience.

• "I Carry You With Me" Another beguiling sounding love story, this one between two Mexican men, involving a still-closeted restaurant worker (Armando Espitia), and a more openly gay high school teacher (Christian Vazquez). When one of them decides to light out of Mexico for the (supposed) greener pastures of the U.S., the pair have to map out what their future might look like together, but apart. Filmmaker Heidi Ewing, a documentarian by trade, makes her feature narrative debut incorporating elements of documentary to augment her story.

• "Notturno" Celebrated documentary filmmaker Gianfranco Rosi (whose previous film was the Oscar-nominated "Fire at Sea"), continues his examination of people living under perilous risk with this film, capturing the unease of the communities who live along the Middle East borders between Iraq, Kurdistan, Syria and Lebanon. As war and international interference continue to lead the countries into one form of political complexity or other, the citizens are left profoundly affected, and haunted by the harrowing possibilities of what might be coming next.

• "Small Axe" Steve McQueen ("12 Years a Slave") returns to New York with three parts of his five-part BBC series, "Small Axe" in tow. The series features independent stories all revolving around the West Indies population in London from the 1969 to 1982. The three pieces screening at the festival, "Lovers Rock," about a romance spurring from a single evening house party; "Mangrove," a real-life story about a bar/restaurant owner who does legal battle with the police to stop their harassment; and "Red, White and Blue," which stars John Boyega as a constable in the '80s, who endures departmental racism and the despicable acts by members of his own force against the citizens, each sound profound.

• "The Salt of Tears" A new Philippe Garrel film is always a potential treat, and this project, about a young man trying to find love, and the various women he meets, romances, and ultimately moves away from in the process, has all the makings of another fascinating portrayal of the romantic condition under the director's stately gaze.

• "Undine" The latest film from German director Christian Petzold ("Phoenix," "Transit"), finds the talented auteur back in Berlin with this love story of sorts between a tour guide (Paula Beer) and a professional diver (Franz Rogowski), who share an adoration of water. Problems ensue when the pair are forced to confront the emotional damage of her past relationships. Sounds simple enough, but in the hands of Petzold, we can expect many a twist and emotional turn.