A Pine Bluff drug dealer convicted of abducting a teenager from her Texas apartment before torturing and killing her 26 years ago is scheduled to be executed next month, the Justice Department announced this week.

Orlando Hall would be the eighth federal death row inmate overall -- and the second from Arkansas -- executed this year if his lethal injection takes place as scheduled on Nov. 19.

His attorneys, Marcia Widder and Robert Owen, said his execution, if it goes forward, would be a "grave injustice" and that racial bias and ineffective legal representation contributed to his death sentence.

Hall, now 49, was one of five men who kidnapped 16-year-old Lisa Rene from her home in Arlington, Texas. Authorities said the group wanted revenge against Rene's brother over a botched drug deal.

Rene's captors kept her alive for two days before taking her to Arkansas, repeatedly raping her, beating her with a shovel and burying her alive, authorities said.

A jury convicted Hall of kidnapping involving homicide, conspiracy to commit kidnapping and other charges. He was sentenced to death for the first charge.

One of Hall's four accomplices, Bruce Webster, 47, also was sentenced to death for his crimes; he remains on death row, according to Federal Bureau of Prisons records.

The others -- Steven Beckley, Marvin Holloway and Hall's younger brother, Demetrius Hall -- received lesser sentences in exchange for their cooperation during trial testimony.

"Mr. Hall has never denied the role he played in the tragic death of Lisa Rene," Widder and Owen wrote in a statement Thursday. "But the jury that sentenced him to death did not know key facts about his background, and the path toward personal redemption that [Orlando] Hall has followed in prison shows that he is not among the 'worst of the worst' for whom the death penalty is properly reserved."

They also said that prosecution team actively kept Black jurors from being impaneled for the trial. Hall, who is Black, was sentenced to death based on the recommendation of an all-white jury, they said.

Hall ran a marijuana-trafficking ring in Pine Bluff and would often purchase his drugs in the Dallas area, according to federal court documents.

In September 1994, Hall flew to Dallas to buy a large supply of marijuana. He met two men at a car wash and gave them $4,700 in exchange for the drugs. The two men were expected to return to the car wash later that day with the product but never returned, authorities said.

Hall called the men and they told him they had their car and money stolen from them during a robbery, which he knew was a lie, authorities said.

Hall and an accomplice gave a phone number that belonged to the two men to a friend who worked at a telephone company and that person traced the number to an apartment in Arlington. That is where some of the men broke into the apartment through a rear glass door and abducted a frightened Rene, who was the 16-year-old sister of one of the men who had ripped off Hall, according to court documents.

Rene was on the phone with a 911 operator when Hall and the other men broke into her apartment, authorities said.

Hall raped Rene in the car while she was being driven to another apartment near Dallas, prosecutors said. Hall's accomplices eventually drove the girl from Texas to a Pine Bluff motel, where the girl was tied up and gang-raped by the other men, according to court documents.

They took Rene to a grave site at Byrd Lake Natural Area where Hall beat her with a shovel. The girl also was doused with gasoline, gagged and buried, prosecutors said. The medical examiner's report indicated that Rene was still alive when the dirt was piled on top of her. She died from the blows from the shovel "combined with asphyxia," the report stated.

Three days after the girl was killed, an arrest warrant was issued for Hall and his accomplices in Arlington. Hall surrendered to authorities in Pine Bluff, and the girl's body later was discovered in a shallow grave, prosecutors said.

A jury convicted Hall in October 1995 and he was sentenced to death.

In a Wednesday news release, the U.S. Department of Justice stated Hall had received a preliminary injunction in 2006 based on his challenge to the "then-existing federal lethal-injection protocol." That injunction, according to the Justice Department, recently was vacated, makig Hall "the only child murderer on federal death row who is eligible for execution and not subject to a stay or injunction."

Hall is scheduled to die by lethal injection Nov. 19 at the U.S. Penitentiary in Terre Haute, Ind. The last Arkansas killer to die there was Daniel Lewis Lee, who was executed July 14. Lee also was convicted and sentenced to death in the murder of a child. He and an accomplice murdered a family of three in January 1996 near Russellville.

The Trump administration resumed federal executions this year after a 17-year pause. Lee was the first of those executions.

Information for this report was contributed by The Associated Press. 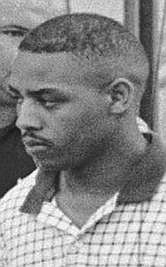 Print Headline: Execution set next month in killing of girl