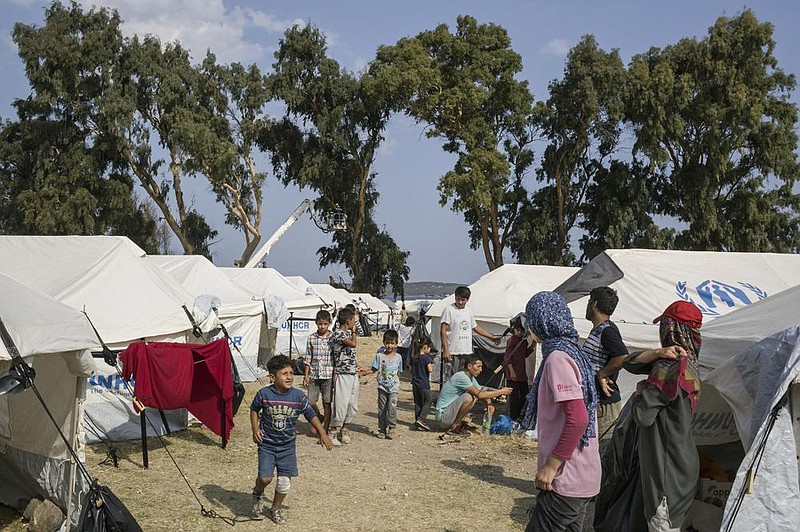 Refugees settle in at a new refugee camp under construction on the Greek island of Lesbos in mid-September. The Trump administration wants to cut refugee admissions to the United States to a new low of 15,000 for the new fiscal year. (The New York Times/Mauricio Lima)

The Trump administration proposed Thursday to further slash the country's refugee program, a move that would take the refugee population cap to an all-time low.

The announcement to reduce how many refugees will be admitted into the United States during the new fiscal year, which started Thursday, was posted near midnight Wednesday by the State Department, the Department of Homeland Security, and the Department of Health and Human Services.

In the notice, officials said the administration would allow 15,000 refugees to enter the United States during fiscal 2021, an almost 17% reduction from last year's 18,000 refugee cap, and an 82% cut since Trump took office. Before the president's proposal becomes official, it needs to be approved by Congress.

"Given the dire situation of nearly 80 million displaced people around the world, the mission of American diplomacy is more important than ever," the State Department said in its announcement. "The President's proposal ... reflects the administration's continuing commitment to prioritize the safety and well-being of Americans, especially in light of the ongoing covid-19 pandemic."

It continued: "The President's proposal ... reaffirms America's enduring commitment to assist the world's most vulnerable people while fulfilling our first duty to protect and serve the American people."

Trump's last-minute proposal before the Oct. 1 deadline to submit the new refugee cap has parallels to last year's announcement, which was also made shortly before the fiscal year began on Oct. 1.

Trump announced then that he would slash the Refugee Resettlement program cap from 30,000 to 18,000, making it the third consecutive year that the administration trimmed the program. During former President Barack Obama's final year in office, the cap was at 85,000.

The president's office said further cuts to the refugee program will help alleviate the "massive" 1.1 million asylum-request backlog that has been exacerbated by the covid-19 pandemic, noting that the government must prioritize "those who are already in the country seeking humanitarian protection."

Citing the health crisis, the Trump administration temporarily suspended refugee admissions into the U.S. from March 18 until July 29.

Despite last fiscal year's lower target of 18,000, the administration attained only about 65% of allotted admissions -- resettling only 11,814 refugees last fiscal year, according to the Lutheran Immigration and Refugee Service, a resettlement agency that has helped hundreds of thousands of refugees with aid since 1939.

The proposal will now be reviewed by Congress.

Rev. John L. McCullough, head of the Church World Service, which helps resettle refugees in the United States, described the shrinking of refugee admissions as immoral and urged Congress to step in, though the president ultimately makes the decision on refugees allowed in under the 1980 Refugee Act.

Congress can recommend changes or seek to influence the decision through budgeting, but is largely powerless to alter the determination.

The record-low admissions figures have also disproportionately affected certain groups. Admissions of Muslim refugees have declined to just 2,503, down from approximately 38,900 in 2016 and approximately 4,900 in 2019, federal data shows.

Additionally, last fiscal year the Trump administration set aside 4,000 slots for Iraqi allies who assisted U.S. interests in their home country. However, it fell drastically short, resettling only 123 individuals in this category, or just 3% of the admissions goal.

"At a time of unprecedented global need, today's decision to further cut the refugee admissions ceiling is a complete abdication of our humanitarian and moral duty," said Krish O'Mara Vignarajah, who leads the Lutheran Immigration and Refugee Service. "We're talking about tens of millions of desperate families with no place to go and having no hope for protection in the near term."

During fiscal 2020, Texas, Washington, New York and California resettled roughly a quarter of all refugees, taking in nearly 8,100, according to the Pew Research Center.

In the proposal, the Trump administration says that "by focusing on ending the conflicts that drive displacement in the first place, and by providing overseas humanitarian assistance to protect and assist displaced people, we can prevent the destabilizing effects of such displacement on affected countries and their neighbors."

"The United States seeks to enable the safe and voluntary return of refugees to their home countries -- the solution that most refugees prefer," the report says. "Therefore, we pursue diplomatic solutions to crises around the world, such as our support for the legitimate government of Venezuela in the face of the illegitimate Maduro regime's tyranny."

This year's proposed refugee resettlement program has specific allocations for people who have suffered or fear persecution on the basis of religion; for Iraqis whose assistance to the U.S. has put them in danger; for refugees from El Salvador, Guatemala and Honduras; and for refugees from Hong Kong, Cuba and Venezuela.

Displaced Iraqis -- including refugees from Jordan, Egypt, Syria, Turkey and Lebanon -- shared the 4,000 allotment, while 5,000 spots are earmarked for "refugees who have been persecuted or have a well-founded fear of persecution on account of religion."

At a campaign rally in Duluth, Minn., President Donald Trump claimed his opponent, former Vice President Joe Biden, wants to flood the state with foreigners. Biden has vowed to raise the ceiling on refugee admissions to 125,000, if elected.

"Biden will turn Minnesota into a refugee camp, and he said that -- overwhelming public resources, overcrowding schools and inundating hospitals. You know that. It's already there. It's a disgrace what they've done to your state," Trump told supporters.

U.S. Secretary of State Mike Pompeo said the administration is committed to the country's history of leading the world in providing a safe place for refugees.

"We continue to be the single greatest contributor to the relief of humanitarian crisis all around the world, and we will continue to do so," Pompeo told reporters in Rome on the sidelines of a conference on religious freedom organized by the U.S. Embassy. "Certainly so long as President Trump is in office, I can promise you this administration is deeply committed to that."

Scott Arbeiter, president of World Relief, a global Christian aid agency, said Trump has reneged on his promise to protect persecuted Christians in the world.

"Instead, we've seen the resettlement of refugees from countries known for persecution drop about 90% in some cases over the last four years," Arbeiter said in a statement. "This is unconscionable."

Bisrat Sibhatu, an Eritrean refugee, does not want to think about the possibility of another year passing without reuniting with his wife.

For the past 2½ years, he has called the caseworker who helped him resettle in Milwaukee every two weeks to inquire about the status of his wife's refugee case.

The answer is always the same -- nothing to report.

"My wife is always asking me: 'Is there news?'" said Sibhatu, who talks to her daily over a messaging app. "It's very tough. How would you feel if you were separated from your husband? It's not easy. I don't know what to say to her."

He said the couple fled Eritrea's authoritarian government and went to neighboring Ethiopia, which hosts more than 170,000 Eritrean refugees and asylum-seekers.

Between 2017 and 2019, his wife, Ruta, was interviewed, vetted and approved to be admitted to the United States as a refugee. Then everything came to a halt.

Sibhatu, who works as a machine operator at a spa factory, sends her about $500 every month to cover her living expenses in Ethiopia.

"I worry about her, about her life," Sibhatu said, noting Ethiopia's spiraling violence and the pandemic. "But there is nothing we can do."

He hopes his wife will be among the refugees who make it to the United States in 2021.

Information for this article was contributed by Monique O. Madan of The Miami Herald; and by Julie Watson and Matthew Lee of The Associated Press.