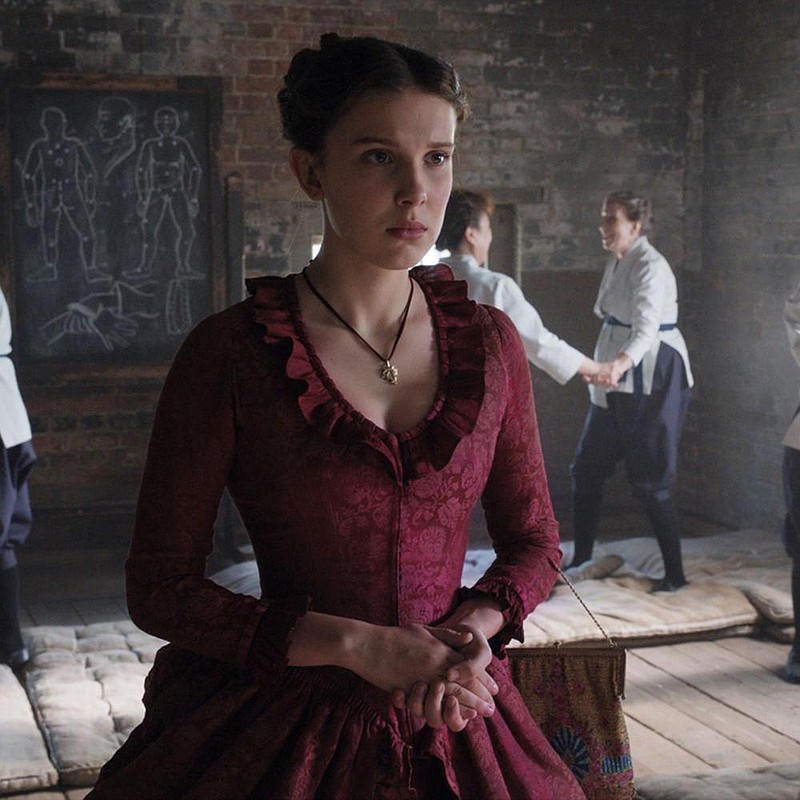 So often in movies about Sherlock Holmes, we focus on the titular character. And why not? He's the most famous person in the stories. Sir Arthur Conan Doyle centered it all around him.

While the spotlight may occasionally shift to characters like Mycroft or Irene Adler, it inevitably falls back on the world's greatest detective (sorry, Batman). That is, until Netflix released a new movie last week.

"Enola Holmes" was one of those movies that I added to my Google Calendar right after the trailer finished playing. Don't judge me, it's how I keep up with all my shows, games, books and movies coming out.

Millie Bobby Brown is a terrific actress. She's fantastic as Eleven in "Stranger Things," and even if most other folks hated "Godzilla: King of the Monsters," I love the scene where she smiles as Godzilla roars into Boston. It makes me grin every time. She is perfect as Enola Holmes.

Brown is funny, she's charming, and as she discovers, she's up to the task of being a damn good detective.

It was initially strange to see Superman (Henry Cavill) playing Sherlock Holmes, but I really did warm up to him in the role, as I did when he played Geralt in "The Witcher." But I feel like Cavill was handcuffed throughout the movie from being the nurturing and caring big brother I so desperately wanted him to be.

You can thank the greedy Arthur Conan Doyle estate for that. They filed a lawsuit against the movie some months back because Sherlock Holmes supposedly has illegal emotions in this new movie. That is, Sherlock is a character so old that he's in the public domain. But a few stories (the ones in which Sherlock displays a more sensitive side) are still copyrighted decades after Doyle's death.

So, his estate argued, Sherlock can appear in movies and television shows. But he cannot be seen as caring or emotional because the stories that give him those attributes are still copyrighted.

Good Lord what a stupid argument. The world is drastically overdue for a major overhaul of copyright laws, despite what the Doyle estate and Disney say about the matter. "Adam Ruins Everything" did a great episode on how burdensome and unfair the copyright system is. And the unjustifiable legal action taken over "Enola Holmes" shows just how outdated the system is.

Doyle died in 1930, yet his estate is able to hold dominion over stories 90 years later? Give me a break.

Because of the emotional tightrope, Cavill was restricted from giving the full performance I know he's capable of.

I squinted when I saw Helena Bonham Carter in the trailer playing Eudoria Holmes (the mother of Enola, Sherlock, and Mycroft). "This isn't a Tim Burton production. What's she doing here?" I snarkily asked myself.

But she's really not in the movie much. Her absence actually drives the plot. When she is present (mostly in flashbacks), I respected her performance. She made a quirky, yet loving mother who raised her daughter to take on the world in a time when women were expected to be cooking and baby-producing machines (well, more so than now, anyway).

The movie is nothing but fun. It's puzzles, plot twists, heartfelt moments and sends a positive message about strong and independent women without coming across as preachy. It's a more whimsical version of Sherlock.

"Enola Holmes" never has a dull moment. Its pacing is fresh, and the characters fit into their roles nicely. Sam Claflin plays a complete jackass of a brother in Mycroft, with zero redeeming qualities. He serves as a solid secondary antagonist.

I couldn't help but compare "Enola Holmes" to the BBC adaptation of "Sherlock" (which I also adore). And while that Mycroft (played by Mark Gatiss) is prissy, intelligent and cold toward others, we find out in season four the tin man had a heart in his chest the whole time. He's a jerk, but he's cheeky about it, and I adore Gatiss' Mycroft (in small doses).

The Mycroft we see in "Enola Holmes" is just a sexist twit. That's all he's there to be, a stuffy British government official who is more worried about Enola damaging the family name than her safety. Maybe that's closer to his personality in the original novels. I don't know. I've never read them.

The real strength of this movie is its characters. Watching Enola work through disguises and deductions is a pure joy, and seeing Sherlock trying to catch up to her and solve the same mystery is a refreshing change of pace.

Louis Partridge plays a character named Tewkesbury who spends a good portion of the film with Enola. He's a doofus, but the character is ultimately lovable because of the way he treats Enola, with respect and adoration. He doesn't look down upon her for being a woman trying to make her way in 1800s male-dominated London.

And I love the parallel of their opposite upbringings. Whereas Enola's mother was expected to raise her to be a homemaker, teaching her to knit and dance, Eudoria teaches her daughter to play chess, to fight, to deduce and reason, and to think independently. And whereas Tewkesbury's father was expected to raise his son to be an emotionless drone capable of carrying on the family's legacy and focusing on things like business and politics, the man instead taught his son how to identify insects and flowers.

Tewkesbury would much rather spend his time in the woods pressing flowers into a book than trapped in a stuffy hall reading a newspaper or debating politics. And Enola would much rather be practicing martial arts than be trapped in the kitchen cooking all day. It was a cool flip of personalities.

Partridge found all the right ways to make his character charismatic and attractive, and he stood out for it (in a good way).

I was initially a little concerned when I saw Enola breaking the Fourth Wall, as that's difficult to pull off in a live-action movie. But she was just as engaging as she was in the rest of the film when talking to the audience (aside from one "Dora the Explorer" moment when she asks for help).

If the movie had one flaw, it was in the abrupt shift of plot half-way through. Enola is initially driven by her mother's mysterious disappearance. And she sets off for London to find her. But about halfway through the movie, she literally says, "Mother can wait," and starts working on a missing person case.

And while the story was still fun and developed its characters all the same, I can't help but feel the plot threads relating to Bonham Carter were left unsatisfactorily dangling in the wind. It's like the film didn't know how to end her part of the story. Her last scene with Enola is just kind of confusing and would have been better cut out altogether.

I think the movie should have ended after Enola's "reunion" with Sherlock and saved anything relating to her mother for the sequel.

Because, let's face it, Netflix has birthed a fresh new franchise here. I don't think I'll grow tired of Millie Bobby Brown solving mysteries and dodging Sherlock and Mycroft for years to come. I want more, Netflix. Make it happen.