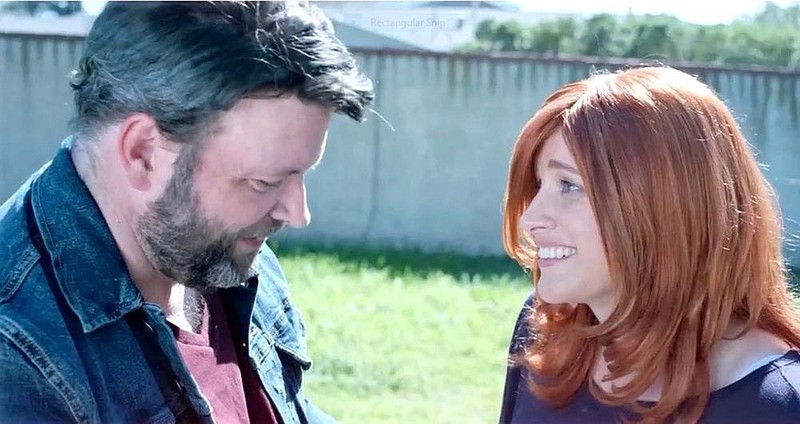 Writer-director-star Angus Benfield and Michelle Fozounmayeh in “Heaven,” a faith-based movie that has the same uplifting moral as “It’s a Wonderful Life.

This is not surrender.

Our movie theaters are for the most part open. New movies are being released into them every week. Other movies are arriving on streaming services such as Netflix and Amazon Prime, and some of them are playing in theaters somewhere.

Other people have movies available to screen in virtual cinemas. And the Arkansas Cinema Society's Filmland kicked off this week. It has two films destined to contend for Oscars, "Nomadland" and Regina King's directorial debut "One Night in Miami," plus a movie written by and starring North Little Rock's Kelly O'Sullivan that may be my favorite of the year, "Saint Frances."

If you want to know more about this year's Filmland, you can watch my video OnFilm column by clicking the appropriate box on this page. Or go to arkansascinemasociety.org.

We've got about two dozen movies opening by some means this week. It seems like all of them are beseeching us to see and to write about them.

And all we have is this six-page movie section. A chunk of which, this week, is given over to a review of the Showtime miniseries "The Good Lord Bird," which some of you would probably argue isn't a movie at all, because it's less the product of a director's singular vision and more the product of a collaborative team consisting of actor Ethan Hawke, author James McBride and writer Mark Richards (best known for the western series "Hell on Wheels"). Or because it wasn't made to be projected on a screen. It all seems like light and sound to me.

We've obviously had to adjust to this new reality. After about 20 years of hustling to track down movies to write about, all of a sudden we've got more screeners and screening links than we can handle. Which is the reason for this column.

While I only watched about half of Angus Benfield's "Heaven," I can tell you that if you're looking for an uplifting faith-based movie about a middle-aged paramedic who wakes up in the Good Place and discovers the life that he'd suspected was meaningless was actually quite profound, this is your play. It's a well-realized and grounded semi-remake of "It's a Wonderful Life" with the added bonus of Eric Roberts, who is close to racking up 600 acting credits on the Internet Movie Database.

We also have reviews of Brian Duffield's "Spontaneous," Brandon (son of David) Cronenberg's "Possessor," Lydia Dean Pilcher's "A Call to Spy," Sofia Coppola's Apple TV Plus film "On the Rocks," and the Showtime documentary "Kingdom of Silence" about the murder of journalists elsewhere in this section.

I'm still hopeful that we'll get that promised screener of "Save Yourselves," which -- from the trailer and a few isolated clips we've seen -- looks hilarious. (If the screener doesn't show up, that's probably the film we'll see in theaters this weekend).

Also opening around Arkansas this weekend -- check your local theaters -- is "Shortcut," an 80-minute horror film to which the critics have not been particularly kind, and RZA's "Cut Throat City," a heist thriller set in New Orleans in the aftermath of Hurricane Katrina. (Ethan Hawke is in this one too, but sadly no Eric Roberts.)

I'm also intrigued by "Jimmy Carter: Rock & Roll President," a documentary that is opening in virtual and select theaters today. (The closest theater to Arkansas that's showing the film is in Oxford, Miss.) And "The Glorias," Julie Taymor's episodic bio-pic of feminist activist Gloria Steinem, played by Julianne Moore and Alicia Vikander as well as Lulu Wilson and Ryan Kiera Armstrong in different stages of her life, which is now available on Amazon Prime.

Also on streaming services is "2067," Jennifer Venditti's 2007 documentary about a teenager from a small town in Maine "Billy the Kid"; Kathy Lee Gifford's romantic comedy "Then Came You;" Abel Ferrara's documentary "The Projectionist" and a couple of Halloween-season horror films.

In time I expect consumers to have about as much choice when it comes to movies as they do with pop music. That will be both good and bad -- it will become easier and easier to make and see movies, but the gap between privileged Hollywood products and do-it-yourself productions will become ever more polarized.

It'll be harder to make a living in the industry, but easier to get your movie to the screen.