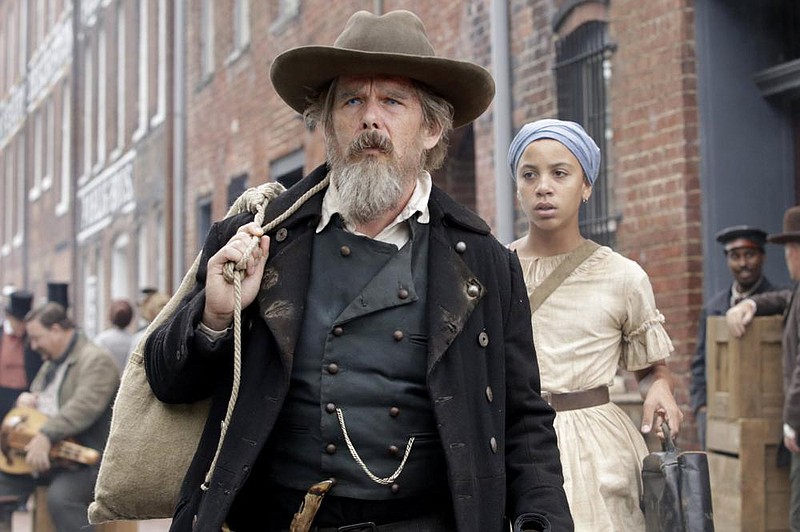 Militant abolitionist John Brown (Ethan Hawke) and his reluctant ward Henry “Onion” Shackleford (Joshua Caleb Johnson) — whom Brown has mistaken for a girl — make their way toward Harper’s Ferry and an inevitable reckoning in the Showtime miniseries “The Good Lord Bird.”

John Brown is a problematic figure 160 years after he became the first American executed for treason for his ill-fated 1859 raid on the federal armory at Harper's Ferry. If we hold any image of him in our heads, it is likely derived from either W.E.B. DuBois' vision of him as the "white-haired old man ... weltering in the blood which he spilled for broken and despised humanity" or as a bearded madman dreaming of the slaughter of infidels, a precursor to domestic terrorists like Ted Kaczynski and Timothy McVeigh.

Or maybe the shock-haired bearded giant on the 1974 debut album by progressive rock band Kansas. (Which is the central image of John Steuart Curry's 1937 mural "Tragic Kansas" in the Kansas state capitol in Topeka. Later Curry would describe Brown as a prototypical Kansan who "went about wreaking good on humanity.")

If "extremism in defense of liberty is no vice" -- words that anarchist writer Karl Hess slipped into his boss Barry Goldwater's speech as he accepted the Republican nomination to run against LBJ in 1964 -- then we might consider Brown's immoderate actions laudable. For he made war on the slavers and certainly hastened the beginning of the reckoning that was the Civil War. And the government killed him for his trouble -- just as they killed Jesus Christ.

Another popular idea about John Brown is that he was smooth-running crazy; a raver, delusional and extravagantly narcissistic.

I don't think we have to choose between the martyr and the madman; Brown was a human being, with the psychological eddies and depths that accrue to men. He was generally effective, in touch with the prevailing thought of his day.

While his raid at Harper's Ferry might seem foolhardy -- a suicide mission unlikely to end with an army of slaves rising up to cut their masters' throats and join Brown's army of emancipation -- he coolly assessed his chances and contemplated the value of his martyrdom to the cause of abolition. Brown was not crazy, simply willing to die to advance what he saw as his holy cause. Like any military commander, he understood casualties could not be avoided. He was willing to trade lives -- even and especially his own -- to accomplish his goal.

It is a part that any actor might like to play, and Ethan Hawke might not have been born for the role -- my mind still sees Raymond Massey, who played the abolitionist twice (and the Great Emancipator once).

But Hawke is great as Brown in the "The Good Lord Bird" (the title refers to the ivory-billed woodpecker, rare then and probably extinct now, whose feathers are said to bring luck), a seven-part Showtime mini-series that debuts Sunday. His blue eyes gleam like Bunsen burners behind a weathered face; they click with glee and rascally bemusement as he rattles around the country, a loose cannonball rolling over convention and polite society.

Hawke's Brown is believably human, a furious, charismatic leader indifferent to details and often ridiculous but authentically committed to doing the righteous thing. I suspect he's very close to what the real Brown must have been like.

Which is important, given how little the Showtime audience might know of John Brown. While people who get their history from movies and television shows get the history they deserve, it's a feature both of this miniseries and the James McBride novel Hawke and Mark Richard adapted that the known facts aren't grotesquely distorted for dramatic or political purposes. "The Good Lord Bird" is fiction, but like the opening title card contends, "all of this is true, most of it happened."

We might take that to mean it's a plausible version of events, which is all we can really ask of "real" history. McBride embellishes it a bit, inventing characters -- most notably 12-year-old Henry Shackleford (Joshua Caleb Johnson), an enslaved boy Brown liberates in pre-War Kansas.

But Henry -- Brown mishears it as "Henrietta" and confuses the kid for a girl he nicknames Onion, after he takes a bite from a rotten vegetable the Old Man has been carrying around as a good luck charm -- isn't exactly sure he wants to be emancipated. After all, he was never hungry before he joined Brown and his ragtag army (which conspicuously shrinks in advance of any engagement). He was never cold at night, and he for sure had never been shot at.

Yet there's something about the Old Man that makes Onion carry on wearing the dress and marching toward a confrontation he suspects can only end in misery.

Johnson is very good in his role, which requires him to be not quite credible as a girl (only white people take him for one, a not-so-subtle-comment on the invisibility of the slave). While his narration runs from bemused to perplexed, his critique of his condition is remarkable. He doesn't see the slavers as any worse than anyone else -- in McBride's novel, he even acknowledges that his "sympathies" lay with his old master, who he allows was something of a slave himself: "He weren't a bad feller. Fact is, he took good care of me, Pa, my aunt and uncle, and several Indian squaws, which he used for rootin' tootin' purpose."

McBride's novel feels like Henry's story. The Showtime series, while faithfully following the novel's contours and pacing, is mostly about Hawke's performance. This John Brown commands our empathy, even in the second episode, when he appears only in the opening and closing scenes.

This is Hawke's show and early on it acquires the feeling of a passion project, with several actors from Hawke's 2018 directorial debut "Blaze" showing up: Ben Dickey as an unlucky farmer; Charlie Sexton as Rev. Martin White, the pro-slavery "red coat" who murders Brown's son Fred and sets off the Pottatomie Massacre; Steve Zahn as a love-struck cowboy; Wyatt Russell as Jeb Stuart.

Ellar Coltrane, who played Hawke's son in "Boyhood," shows up as one of Brown's seemingly countless offspring (depending on what source you like, he had between 12 and 22 children). Later, Maya Hawke, Ethan's daughter with Uma Thurman, shows up to play Annie Brown, the abolitionist's daughter.

As much fun as the actors have, there's a seriousness of purpose to the series. The second episode is especially poignant, as Onion temporarily leaves Brown's company to work in a whorehouse and to witness the treachery visited on Sibonia (Crystal Lee Brown) by her fellow slaves.

Frederick Douglass (Daveed Diggs) and Harriet Tubman (Zainab Jah) appear as alternate versions of their storybook selves -- Douglass is a particularly interesting character, vain and very much aware of his brand. He's committed to the liberation of the enslaved, though not so committed as Brown.

With his unequivocal actions, the historical Brown shamed the gradualist genteel abolitionists and alarmed the Southern interests who considered slavery a benign and economically necessary form of paternalism that was as much in the interest of the incompetent enslaved as well as their masters.

While Brown's mission is epic, the series feels more like a character study, and it is best in its more relaxed behind-the-scenes moments. Brown is famous, but not rich, and while he's a commanding orator, his sons and comrades have heard all his bluster before. He's a prophet without much honor among his familiars, though they do follow him.

Probably because they know he's right. 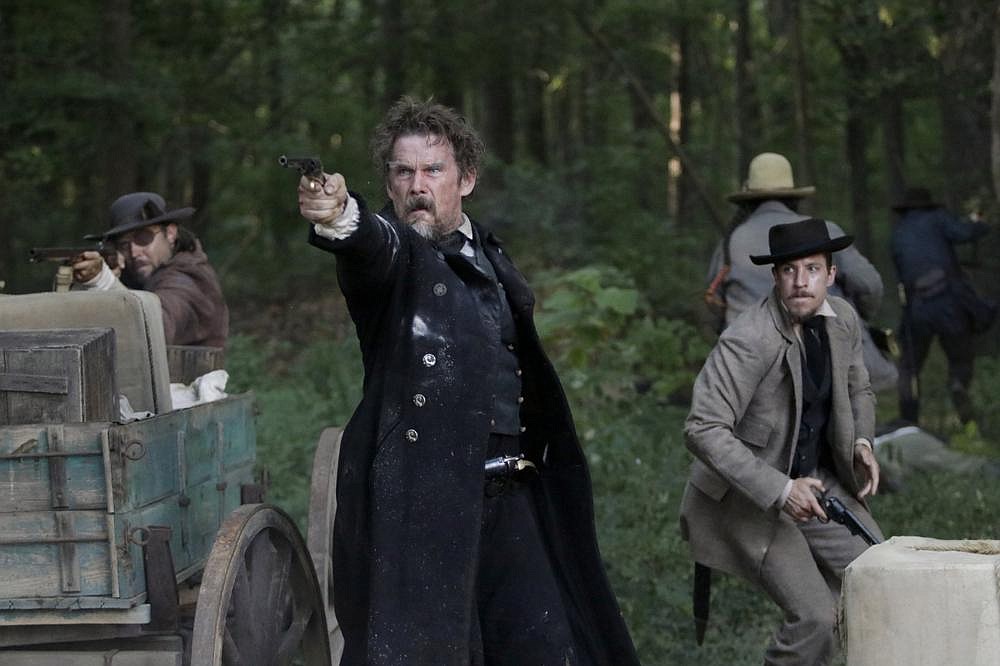 John Brown (Ethan Hawke) and his son Owen (Beau Knapp) shoot it out with the U.S. Cavalry in a scene from Showtime’s miniseries “The Good Lord Bird,” which premieres Sunday.
ADVERTISEMENT