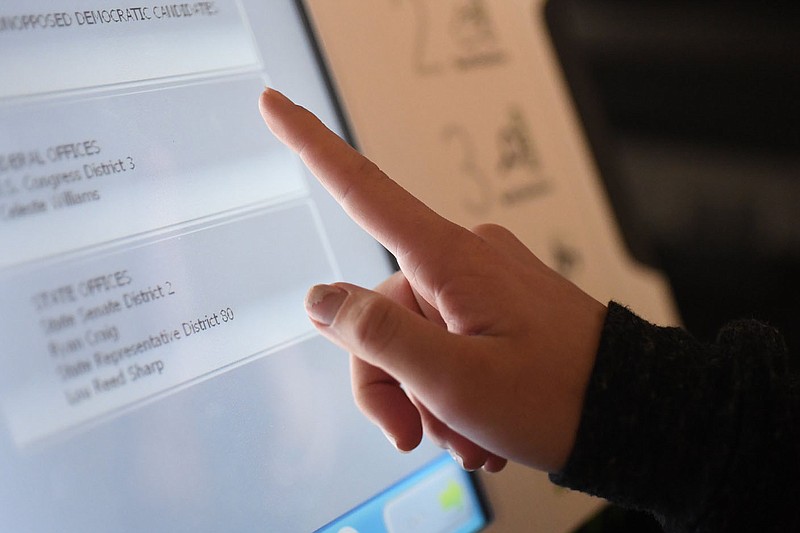 FAYETTEVILLE -- With election day little more than a month away Jennifer Price, Washington County's election director, says she's confident the county will have a successful election, but she's still working on making it so.

Price briefed the Election Commission on preparation for the Nov. 3 general election. She said she continues training poll workers and sorting issues that might seem like minor details but could have an impact on the the election.

"We've been in training all day every day this week," Price told the commission.

Price said she normally has between 350 and 360 poll workers to draw on. While she said she has more than that as of Thursday, the makeup of the teams is still in flux. Price said she's still having experienced poll workers drop out daily.

She said some poll workers are choosing not to work out of concerns about the pandemic and some for other reasons. She said she expects that to continue through election day. Right now, Price said, she expects to have at least 140 new poll workers for this election.

Price said she has enough poll workers to handle the election but is having to spread those with prior experience thinner than in the past. She told the commission she expects to have new supervisors at several of the early vote centers and at election day polling places as well.

"The trick is getting a good ratio of experienced poll workers to brand new poll workers," Price said. "We're still having people drop out so we're preparing to have extras where we can if that does happen between now and election day."

Price said she trained poll workers in groups according to the vote center or polling place they will be working at so they can be familiar with the layout and how the process should flow and procedures they'll have to lead voters through.

Price said she has tried to cover as many contingencies as she can, including some arising with an election during a pandemic. She said Washington County has already received more than 8,800 requests for absentee ballots. The largest number of absentee ballots in any past election has been around 1,600.

Price said she's aware of questions in other jurisdictions about absentee ballots being mishandled or misplaced and has alerted her poll workers.

"What if a voter asks for an absentee ballot then decides to vote in person and brings the absentee with them?" Price said. "We're not supposed to accept them. The voter is supposed to take them home with them to destroy them and to vote a provisional ballot. But what if that voter decides to throw it in a trash can on their way out the door? The story will be 'Ballots found in trash cans.' We've got to be mindful of that because of the perception. I've talked about it in every training session we've had."

Price also briefed the commission on the timing of a potential runoff election, which would be held Dec. 1, and problems that might arise.

The number of runoff elections and their locations will determine how many vote centers will need to be opened and will also set the number of absentee ballots to prepare and mail after the general election. Price said there have been about 3,500 absentee ballots requested in Fayetteville and 881 in Springdale

"All those voters automatically get an absentee ballot for the runoff," Price said. "It could be over 5,000 absentee ballots that have to be sent out in a very short time."

Price told the commission she's working out some details, including one unexpected problem with signs the state has distributed to all 75 counties to place on the floor of voting locations to encourage social distancing and mark the places where people need to stand when they are waiting to vote. Washington County received 735 of the signs.

Price said she put one of the signs down on the carpet floor of her office as a test and during the day a poll worker stepped on it and the sign slipped under them. The worker was hurt but continued working, Price said, and she has decided not to use the signs and will instead mark the floors with blue painter's tape.

The commission asked price to notify the state of the issue with the signs and also to send a cautionary email to the group of Northwest Arkansas counties that Washington County has been collaborating with on election issues.

Information about voting in the Nov. 3 election can be found on the Washington County website at www.washingtoncountyar.gov under the Election Commission. The site provides information on voter registration, absentee voting, early voting and election day voting locations, lists of candidates and links to sample ballots.