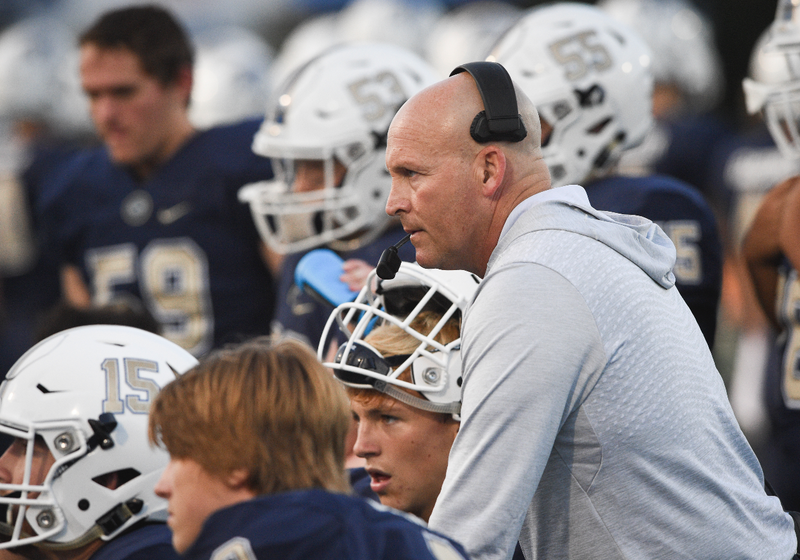 BETWEEN THE LINES West has won the previous four meetings, including a 54-20 decision last year at Jarrell Williams Bulldog Stadium. … Springdale, which defeated Rogers Heritage last week, attempts to go 2-0 in league play for the first time in more than a decade. … Bulldogs QB Landon Phipps has accounted for nine touchdowns, including four in last week’s victory. … Senior MLB Travon Westbrook has 52 tackles through the first four games, including 16 against Heritage. … West will open 7A-West Conference play this week after last week’s game against Fayetteville was canceled and the Wolverines opted for a nonconference game against Greenwood. … Wolverines QB Dalton McDonald has thrown for 857 yards and 6 TDs, while he and RB Carlos Hall has combined for 429 yards rushing and 10 TDs. … Four West players have caught at least 10 passes this season, with sophomore Ty Durham and senior Stephen Dyson tied for the team lead with 19.

ON THE AIR The game will be live-streamed on each team’s school web site.

BETWEEN THE LINES Bentonville has compiled a perfect record with three road wins including wins against top teams in both Missouri (Kansas City Rockhurst) and Kansas (Mill Valley). The Tigers finall played a home game last Friday and throttled Springdale Har-Ber 45-6. … Southside had to scramble to final game last week after Rogers High was forced to cancel because of covid-19 issues. The Mavericks traveled to Texarkana and fell 21-6 to Class 5A Arkansas High. … Bentonville did not put up big offensive numbers against Har-Ber, but the Tigers’ defense did, limiting the Wildcats to fewer than 200 total yards and scoring a pair of defensive touchdowns on a scoop and score and a pick-six. … Southside, under first-year coach Kim Dameron, has won just twice in its past 14 games. … The Tigers’ only weakness is lacking a consistent run game. Against Har-Ber, Bentonville managed just 94 yards on 26 carries. The leading rusher was sophomore Josh Ficklin with 40 yards. … The Mavericks suffered six turnovers in the loss to Arkansas High including an interception at the goalline.

HOOTEN’S RANKINGS Bentonville is No. 2 in Class 7A; Southside is No. 14.

ON THE AIR The game will be live-streamed on each team’s school web site.

BETWEEN THE LINES Heritage earlier this season snapped a 25-game losing streak, but the War Eagles enter the game off a shutout loss to Springdale High 34-0 last week. … Har-Ber is winless after a brutal nonconference schedule and a mercy-rule loss to Bentonville last week to open 7A-West Conference play. … Turnovers have been fatal for the Wildcats this season and that was no exception last week. Bentonville returned a fumble and an interception for touchdowns in the 45-6 game. … Lost in Har-Ber’s 0-4 start has been the play of its defense, which was solid against Bentonville last week, allowing just 94 yards on the ground. … Heritage only had a couple of scoring chances against Springdale last week. … Har-Ber sophomore RB Hudson Brewer leads the Wildcats in rushing and scored the Wildcats’ only touchdown last week. …

ON THE AIR The game will be live-streamed on each school’s web site.

BETWEEN THE LINES Northside was the latest victim in the Bryant buzzsaw last week, falling 48-7 to the top-ranked team in the state. … Fayetteville has not played a game in the past two weeks after its 7A-West opener last week against Bentonville West was canceled. … The Grizzlies had no answer for Bryant’s speed and defense as Northside quarterback Dreyden Norwood, who is verbally committed to Texas A&M as a defensive back, spent most of the game trying to elude a fierce pass-rush. Norwood did score Northside’s lone touchdown. … Fayetteville is winless, but it has played a tough nonconference schedule against Conway, Owasso, Okla., and North Little Rock. … The Bulldogs have been outscored 104-55 in the three losses. … Fayetteville’s two quarterbacks have combined to go 43-of-77 for 671 yards and 1 touchdown with 6 interceptions. … Norwood is 27-of-53 for 344 yards with 1 passing TD and 2 interceptions. He has rushed for 148 yards and 4 scores. … Walker Catsavis has 109 catches for 184 yards for the Grizzlies.

HOOTEN’S RANKINGS Northside is No. 11 in Class 7A; Fayetteville is No. 10

ON THE AIR The game will be live-streamed on the Van Buren Public Schools web site.

BETWEEN THE LINES The 6A-West promises to be a dogfight this season, and week one was no exception as both Van Buren and Russellville lost wild offensive games. Russellville fell to Benton 47-40, and Van Buren lost 43-42 in overtime at Siloam Springs. … Russellville has quick-strike ability on offense behind QB Brayden Whitford, who lit Benton up last week for 375 yards and four touchdowns. … Van Buren fell into a 21-0 hole against Siloam Springs before roaring back in the fourth quarter to tie the game at 35-35. The Pointers scored first in overtime to take a 42-35 lead, but Siloam Springs scored a touchdown and added the two-point conversion for the win. … Van Buren quarterback Gary Phillips passed for 321 yards and rushed for 119 to go with 5 combined touchdowns. … Pointers’ WR Jaiden Henry had 10 catches for 227 yards — 7 catches in the fourth quarter.

HOOTEN’S RANKINGS Russellville is No. 14 in Class 6A; Van Buren is No. 8

ON THE AIR The game will be lived-streamed through Siloam Springs’ athletics website siloamspringsathletics.com.

BETWEEN THE LINES Benton has won all four meetings against Siloam Springs, including a 28-26 win in 2019. … Benton’s Casey Johnson has rushed 80 times for 452 yards and five touchdowns. … Quarterback Garrett Brown has completed 71 of 138 passes for 1,018 yards, nine touchdowns and two interceptions. … Cameron Harris has 20 catches for 348 yards and six touchdowns. … Benton lost 48-7 to Bryant in season opener but beat Little Rock Southwest 44-6 in Week 2. Benton lost to Little Rock Catholic 35-28 in Week 3 and defeated Russellville 47-40 to open 6A-West Conference play last week. … Siloam Springs quarterback Hunter Talley has proved to be a dual-threat. He’s rushed 62 times for 315 yards and seven touchdowns. He’s completed 50 of 70 passes for 761 yards, five touchdowns and one interception. … Zach Gunneman leads the team in rushing with 48 carries for 357 yards and three touchdowns, while Camden Collins has 37 carries for 302 yards and five scores, Jeff Phizema 14 carries for 272 yards and three scores. … Gavin Henson is Siloam Springs’ leading receiver with 15 catches for 294 yards and three touchdowns. … Talley ran in the game-winning two-point conversion for a 43-42 win over Van Buren to open conference play last week.

BETWEEN THE LINES This will be the first meeting between the new schools. … Morrilton WR Reggie Toney is tied for the school record with 23 career TD receptions after his TD catch last week against Greenbrier. Half of Toney’s 10 receptions this season have gone for scores. … RB Jackson Moll averages 112 yards rushing per game and has four TDs. … ILB Cade Halbrook leads the Devil Dogs with 31 tackles, followed by OLB Caimen Fitzpatrick with 27. … Pea Ridge made its 5A-West debut last week, coming from behind to defeat Alma 35-28. … Pea Ridge came from behind for a 35-28 victory over Alma and win its 5A-West Conference debut. … Blackhawks RB/DB Joe Adams recovered a fumble to deny Alma a two-touchdown lead, then scored two touchdowns in the fourth quarter to spark the rally. … QB Zac Withrow has had two good games passing for Pea Ridge since assuming the role following an injury. … Jake Ingram secured the win with his interception with 1:10 remaining.

BETWEEN THE LINES Alma has won 14 of the last 19 meetings between the two schools, but Harrison has won the last three, including a 35-0 rout of the Airedales last year. … Alma RB Logan Chronister set a school record with 287 yards last week and became the first Airedale runner to have three straight 100-yard games since Isaac McCoy did it in 2010. … Alma has struggled with turnovers and has lost the ball 11 times in its first four games … Harrison begins 5A-West Conference play after last week’s game at Farmington was canceled, and the Goblins played Ozark in a nonconfernce game. … The Goblins enter tonight’s game with a 16-game win streak in conference play. .. QB Cole Keylon has thrown for 906 yards and 10 TDs through four games, and he accounts for 427 yards and 5 TDs on the ground. … Harrison’s defense sports balance as seven players have compiled at least 20 tackles apiece. Anthony Allen and Dylan Block share the team lead with 27 apiece.

BETWEEN THE LINES This is a huge early-season clash between what are likely the top two teams in the 3A-1 Conference. Cedarville has not been tested in its 4-0 start with four straight blowout wins including last week’s 46-14 bashing of Lavaca. …. Charleston crushed a solid Greeland team 48-14 with a punishing run game. … Cedarville is also a power run team, led by junior RB Darryl Kattich, who leads the state in rushing with 800 yards, while playing just the first half of all four games. … The Tigers shook off an early 6-0 deficit last week by dominating the second half and limiting Greenland RB Jett Dennis to just 40 yards in the second half. … Charleston QB Brandon Scott, a sophomore, passed for 128 yards and ran for 123 and 3 total touchdowns. … Cedarville has not beaten Charleston since 1985. The winner of this game likely has the inside track to the 3A-1 title even with a lot of games to play.