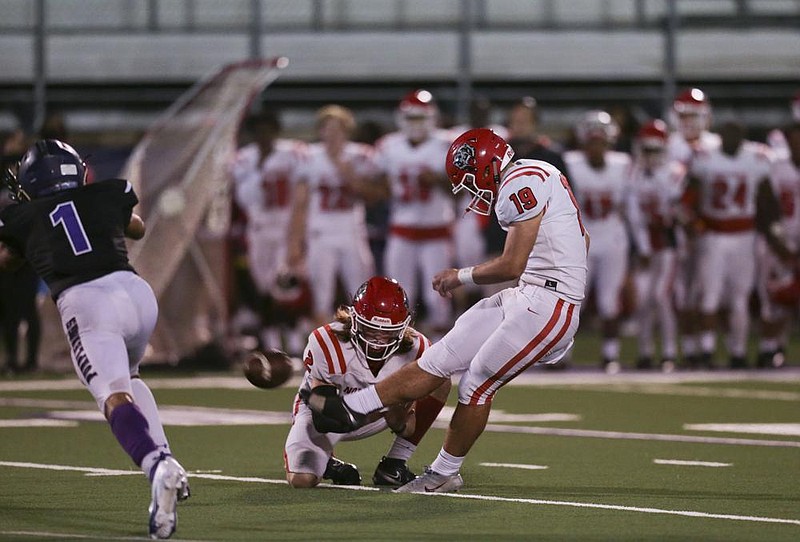 Slate Stanton kicked a 25-yard field goal with seven seconds remaining to give Fort Smith Northside a 33-30 victory over Fayetteville in a nonconference game Friday at Harmon Field.

“(Stanton) calls himself ‘The Ice Man’ and he was ice tonight,” Northside coach Mike Falleur said. “Great job by Stanton and the deep snapper, the whole crew.”

Stanton’s clutch kicks enabled Northside (3-1) to overcome a 10-point deficit in the third quarter after Bladen Fike threw two touchdown passes and Jaden Jones returned a fumble for a touchdown. Norwood threw a touchdown pass before Northside overtook Fayetteville (0-4) with the field goals from Stanton.

Both teams committed four turnovers and Fayetteville scored a touchdown in the third quarter following a fumbled punt.

“A lot of that was us, not fielding the kickoff and a bad snap,” Falleur said. “Fayetteville’s a good team and we needed something good to happen tonight.”

Fayetteville’s defeat overshadowed a strong performance by Isaiah Sategna, who caught two touchdown passes and had over 200 yards in receiving.

Fayetteville and Northside agreed to play Friday after their scheduled games were canceled because of covid-19 concerns. Fayetteville was supposed to play Rogers while Northside was scheduled to play at Little Rock Central The game prevented Fayetteville from going three weeks without playing.

Fayetteville scored two quick touchdowns in the third quarter to overcome a sloppy first half when the Bulldogs committed three turnovers.

Sategna displayed his track and field speed when he turned a short pass from quarterback Bladen Fike into a 65-yard touchdown to put Fayetteville ahead 17-14. The play appeared headed for short yardage but Sategna broke a tackle and outran the pursuit down the home sideline at Harmon Field.

Northside fumbled the kickoff and Fayetteville took advantage when Fike connected with Kameron Ingram for a 21-yard score. Norwood threw two touchdown passes in the first half after Fayetteville opened the scoring on a 28-yard field goal by Thomas Needy. Fayetteville scored a touchdown just before the half when Fike threw 59 yards to Isaiah Sategna for the touchdown.

• Fayetteville called three timeouts before Stanton made his game-winning kick with seven seconds left to play.

• Northside fumbled on its second play of the game but Fayetteville gave it right back with an interception.