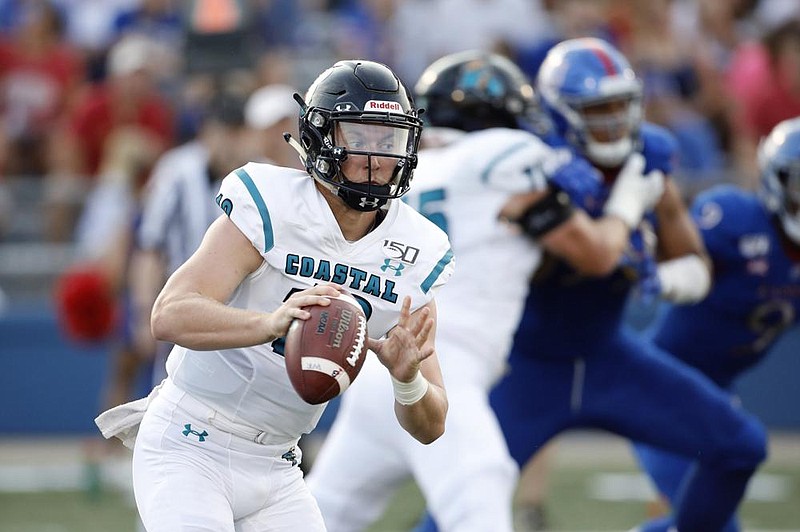 Arkansas State University defensive coordinator hasn't forgotten how many times Coastal Carolina went for it on fourth down against the Red Wolves a year ago.

"It was nine," Duggan said with a smirk. "I remember."

Duggan and ASU are expecting much of the same today in Conway, S.C., against Coastal Carolina in their Sun Belt Conference opener at 11 a.m. Coastal Carolina attempted 29 fourth downs last season and converted 23 times, giving the Chanticleers the second best fourth-down conversion percentage in the country in 2019. They were 5 of 9 against the Red Wolves.

The Chanticleers' high fourth-down success rate is due to their triple-option attack that can hurt teams on the ground and surprise them through the air. For ASU, which has had the last two weeks off due to game postponements associated with covid-19, the extra time has been used studying the look it'll face today.

"Whenever you're going to play a team this optional formationally, and can throw it, and they can run the option, every added day that you have is a bonus," Duggan said. "Hopefully you can get your guys more comfortable with the option phase and now obviously we've got to defend the pass phase."

Duggan mentioned redshirt freshman quarterback Grayson McCall, who has led Coastal Carolina to a 2-0 start thanks to his dual-threat ability.

McCall has been good through two games for the Chanticleers, throwing for 405 yards and 5 touchdowns while also rushing for 95 yards and 2 touchdowns.

"Any time you get a quality guy under center that can make throws as well as run the option, it's going to cause you some problems defensively," Duggan said. "We're going to have our hands full with the challenge of not only stopping the triple option, but now you've got the added effect of you better be able to defend the pass as well."

Facing Brady White at Memphis and Skyler Thompson at Kansas State, ASU's defense has yet to see a quarterback quite like McCall this year. White is a prototypical pocket passer, while Thompson is an able thrower given time and likes to run, but is not as quick as McCall, who can accelerate in the open field.

"I think part of the challenge with that quarterback is that we haven't really seen that style of quarterback this year yet, and it's kind of hard to game-plan for him because he can ... pass and run," sophomore cornerback Samy Johnson said. "It's always challenging when you have to contain a quarterback and also worry about the pass. As a defense, we just have to know our assignments."

The one position group that will arguably face the most difficult challenge is the linebackers, having to fill open running lanes in the triple option while also spying McCall on pass plays in case he takes off.

"We're going to have to fly around and make sure everyone is on their P's and Q's," senior linebacker Caleb Bonner said. "We need to be physical, play down hill and just communicate. We can't hesitate against an offense like this. If we do those things, we'll be good."

After missing five defensive starters against Kansas State -- including its three starting linebackers -- Duggan said he expects close to, if not the entire, two-deep for the Red Wolves to be back.

While having to play and practice without key players has been difficult, it's also opened the door for others to compete for playing time. Duggan said don't be surprised if some of the guys who played against Kansas State also play against Coastal Carolina. And it's that depth that will help ASU as conference play gets underway.

"We're getting a lot of guys ready to play, " Duggan said. "And that's a blessing this season that you may not have given guys an opportunity, but now they've shown they're very capable of giving you quality reps. It's reason for optimism defensively."