25 people saved in floods in France; 2 killed in Italy 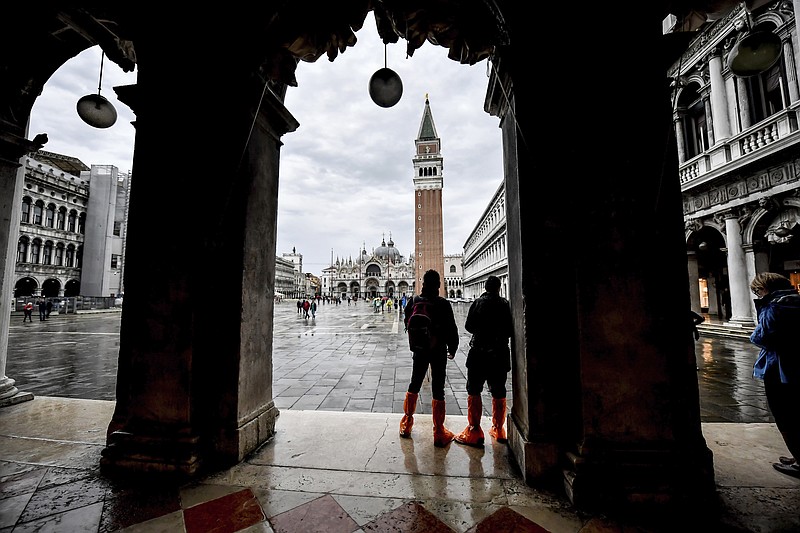 People wear waders as they observe St. Mark's Square during an expected high water, in Venice, northern Italy, Saturday, Oct. 3, 2020. Controversial and long-delayed underwater barriers passed their first emergency with flying colors on Saturday, protecting the Italian lagoon city of Venice from a tide that peaked at 130 centimeters (51-inches), a level that would normally inundate about half of the city. (Claudio Furlan/LaPresse via AP)

PARIS -- Italian firefighters rescued 25 people trapped on the French side of a high mountain pass by severe flooding that killed two people in Italy, while 15 were stuck in a train station for the night and eight more remained missing Saturday in France.

A storm that moved overnight across southeastern France into northwestern Italy caused major flooding on both sides of the border, destroying bridges, blocking roads and isolating communities.

In Italy, a firefighter was killed during a rescue operation in the mountainous northern region of Val d'Aosta. A search team found a body in the Piedmont region's Vercelli province, where a man had been swept away by floodwaters late Friday.

The Italian firefighters used a helicopter to ferry 17 people to safety from the French town of Vievola, including a woman with two grandchildren. A bulldozer fetched another eight people who managed to climb the Col de Tende, a high mountain pass linking France and Italy, to a tunnel.

Fifteen more people were taking shelter in the Vievola train station after the operation to rescue them was put off until daylight.

The spokesman for Italy's firefighters, Luca Cari, said a search was ongoing for a missing shepherd who was pulled into floodwaters on Col de Tende. His brother managed to grab onto a tree and was saved, while authorities were searching on the French side for the shepherd.

The situation at the tunnel on the high mountain pass was complicated by the fact that French emergency responders cannot access their side due to flood damage, Cari said.

Unrelenting rainfall overnight hit levels not seen since 1958 in northern Italy's Piedmont region, where as much as 24.8 inches of rain fell in a 24-hour period, according to the Italian civil protection agency.

Hundreds of rescue operations were carried out. Eleven campers were saved in Vercelli province, where floodwaters hit 20-year highs. And Alpine rescue squads have evacuated by foot seven people who were in houses cut off by flooding at Terme di Valdieri; some had to be carried on stretchers due to the muddy conditions and accumulation of detritus.

On the other side of the border, in southeastern France, almost a year's average rainfall fell in less than 12 hours in the mountainous area surrounding the city of Nice. Nice mayor Christian Estrosi said over 100 homes were destroyed or severely damaged in the area.

French Prime Minister Jean Castex, who flew over the area in an helicopter, confirmed that at least eight people were missing in France, including two firefighters whose vehicle was carried away by water when a road collapsed.

In central Switzerland, flooding along the Reuss River caused the closure of a stretch of the A2 highway -- a major trans-Alpine route. Further east, 13 residents were evacuated from their homes in the town of Diesbach because of flooding.

Information for this article was contributed by Geir Moulson of The Associated Press. 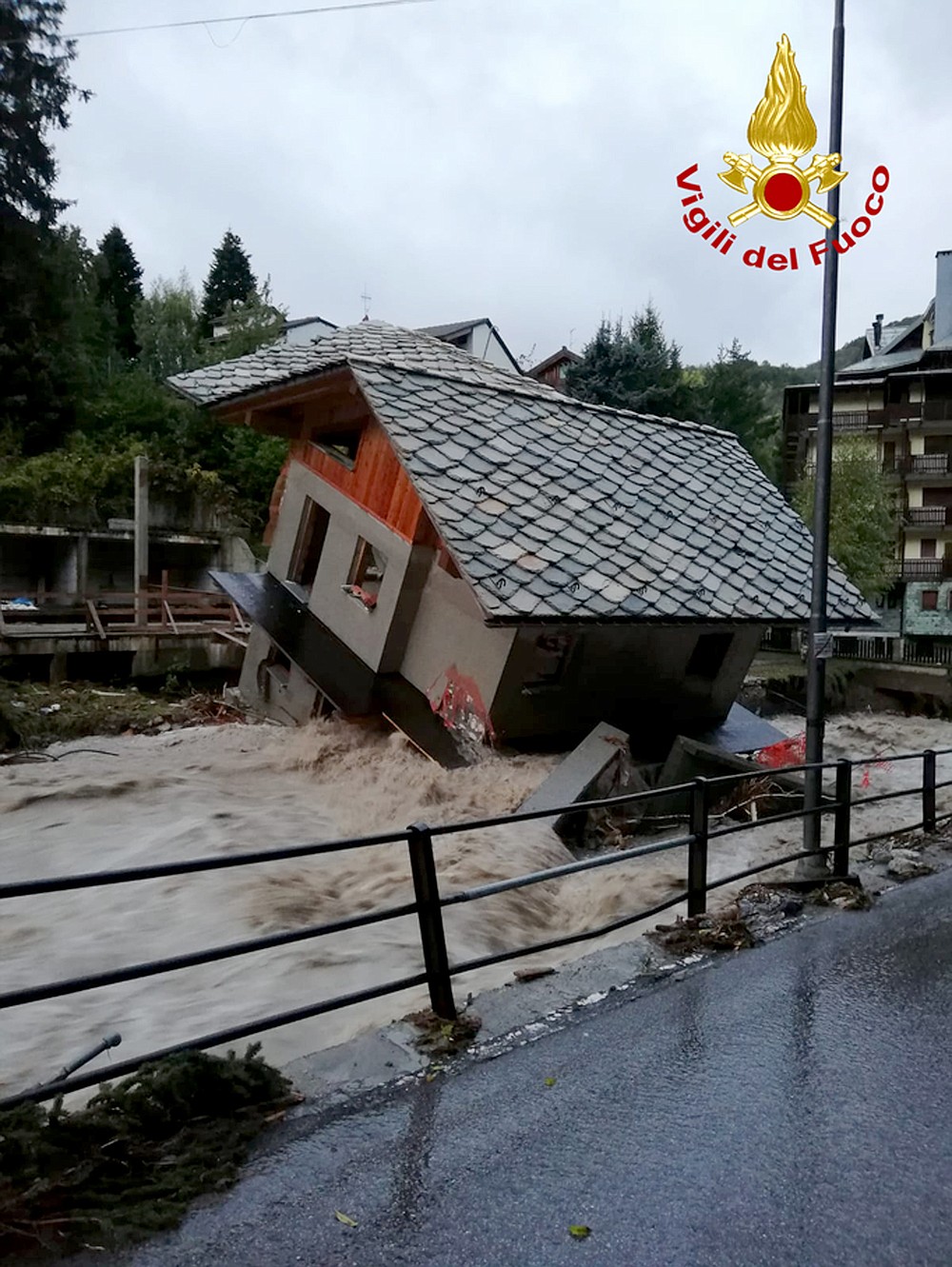 A building is toppled over by the Cervo river in spate due to heavy rains in Biella, northern Italy, Saturday, Oct. 3, 2020. (Firefighter Vigili del Fuoco via AP) 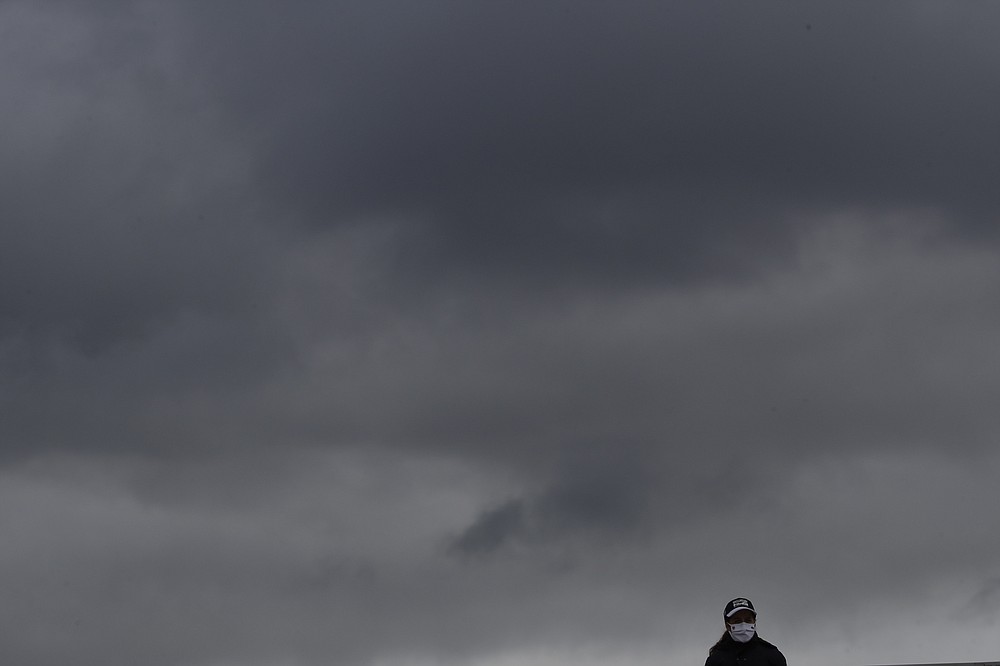 A lone spectator is silhouetted against rain clouds passing over third round matches of the French Open tennis tournament at the Roland Garros stadium in Paris, France, Saturday, Oct. 3, 2020. (AP Photo/Alessandra Tarantino)
ADVERTISEMENT