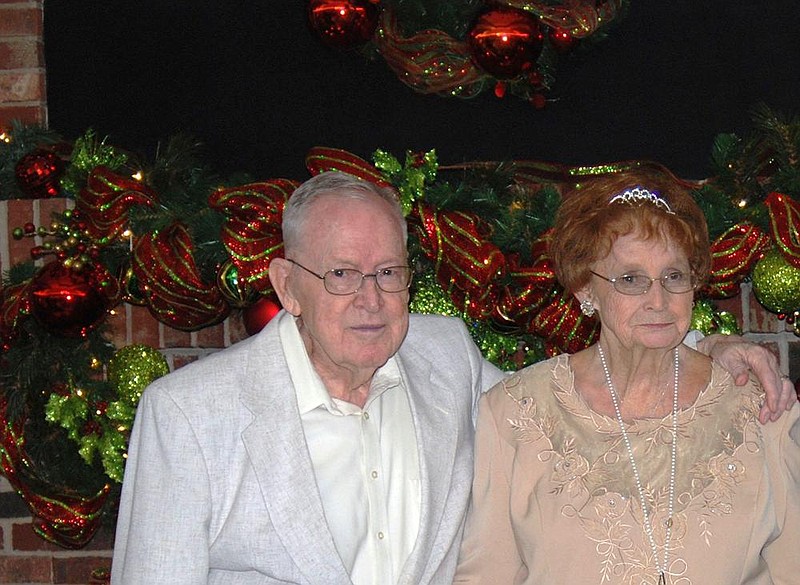 Hershel Douthit and Betty Roe were married on Dec. 29, 2018, at Trinity Village Retirement Community. “We have an interesting story to share,” Betty says. “It might give someone else the will to stay in there because love is grand when you really find it even if you wait until you’re 85 years old.” (Special to the Democrat-Gazette)

Hershel Douthit spent a month or so of evenings sitting with a book in the dining room at Trinity Village Retirement Community in Pine Bluff in late 2018, but he scarcely processed any of the words on the pages.

"My stint in the Army back in 1944 and '45 was in intelligence and reconnaissance, and I learned how to appear to be doing something I wasn't doing," says Hershel, who is 95.

Hershel was, in fact, pretending to read while stealing glances at Betty Roe over the top of his book.

Hershel and his first wife were married almost 56 years when she died in 2016. They had moved to Trinity in 2014.

Betty, also widowed after a long marriage, moved there in 2017. It was several months later that Hershel first noticed her as she returned to the building after an outing with a friend. It was her red hair that caught his attention, he says.

"I come from a long line of Irishmen and until I was about 15 years old my hair was about two shades redder than hers and then it turned out to be reddish-brown," he says. "I just thought her red hair was so pretty, not to mention she's just good-looking."

Betty, who is 85, didn't notice him then, nor did she pay much attention to him and his book in the dining room.

She and Hershel had said hello in passing, but she just assumed he was a bookworm, and that as such he probably wasn't very sociable.

A nurse noticed Hershel's surreptitious surveillance efforts and she tipped off Betty.

She invited him anyway to a special event that was happening at Trinity Village, and Hershel begrudgingly joined in.

She didn't give up. She knocked on his door again the next day, ignored his surly attitude and invited him to another special event.

"I went out and sat down that day and the next thing I knew, he came and sat next to me," she says.

After that, they started participating in events together.

"We just kind of got to know each other," Betty says. "I'd go down to his room or he'd come out to the lobby and we talked a lot."

They discussed her long career as a registered nurse and the extensive travels that came along with that.

"I have been on 15 major disasters in these last years," she says. "Since the year 2000, I was at Ground Zero and I was in Houston for the floods and several others."

They discussed Hershel's years of building up a successful business, Douthit Radio Service, and about his playing guitar in a band and about Betty's impersonations of Minnie Pearl. They spent most of their waking hours side-by-side.

"One day he just said, 'Wouldn't it be nice if we could just be together?'" Betty says.

It had taken a while for Hershel to get up the nerve to propose marriage, he says. Once he finally did, she said yes.

Their families were a constant part of their conversations.

Both had long marriages before they met, and they have children, grandchildren and great-grandchildren.

"I've even got some great-great-grandchildren coming on," Hershel says.

"We talked about how our mates were gone and how we loved them very much and how we did whatever we could for them and we know where they are and we'll see them again," Betty says.

"They threw us a big she-bang out here at Trinity," says Hershel, who sees their union as a blessing. "I think this is one of those things that just happens and I think someone else, besides her and me, was involved. I'm talking about the man upstairs."

Word spread about their relationship as the staff at Trinity planned their nuptials, and people they didn't even know were inspired to show up to wish them well.

Hershel and Betty enjoyed getting out and about for shopping and live music shows before the covid-19 pandemic led to a lockdown of their retirement community.

"We would go out to Sulphur Springs to the Methodist Church out there, they had some bands playing once a week or so," Hershel says.

He thinks it's harder for Betty to stay put than it is for him. She is glad that at least they are locked down together.

"We have an interesting story to share," Betty says. "It might give someone else the will to stay in there because love is grand when you really find it even if you wait until you're 85 years old." 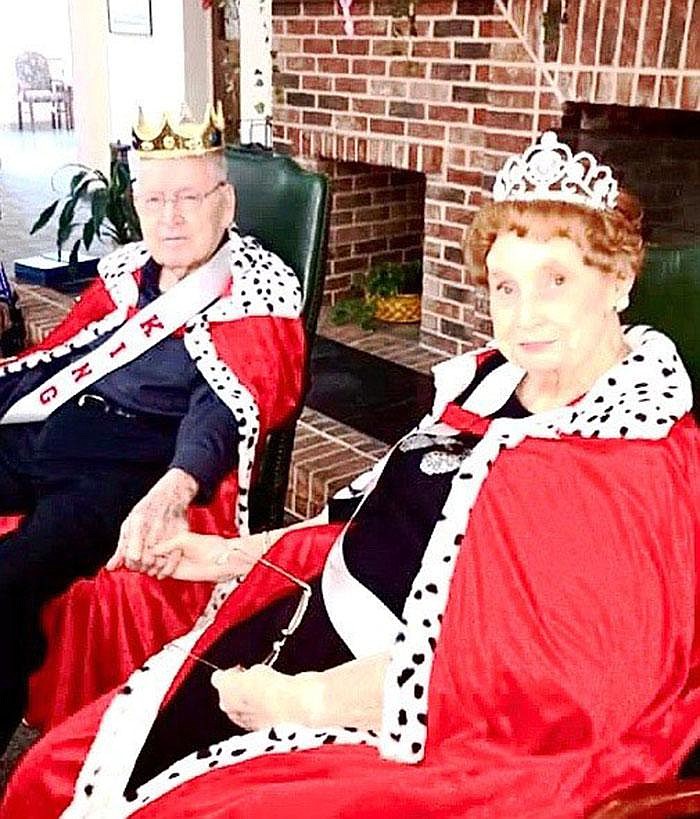 Hershel Douthit, 95, surveilled his future wife, Betty, 85, for a month of evenings, pretending to read while instead watching her every move over the top of his book. “I didn’t spend two years in intelligence and reconnaissance for nothing,” he says. (Special to the Democrat-Gazette)
More News

He says: “I noticed her red hair. I couldn’t believe that hair. She’s just really good-looking.”

She says: “I thought he was a kook because he was always reading a book.”

He says: “Trinity threw us a big she-bang. I wasn’t nervous. I’ve been past the nervous stage for a long time.”

She says: “Oh, it was wonderful. Someone put out the word and it was a big wedding. There were people we didn’t even know and we had a big cake with our picture on it.”

My advice for a happy marriage:

He says: “Be individuals and allow them to be.”

She says: “Listen. Just listen to them. That’s how two people come together and know what the other one wants.”