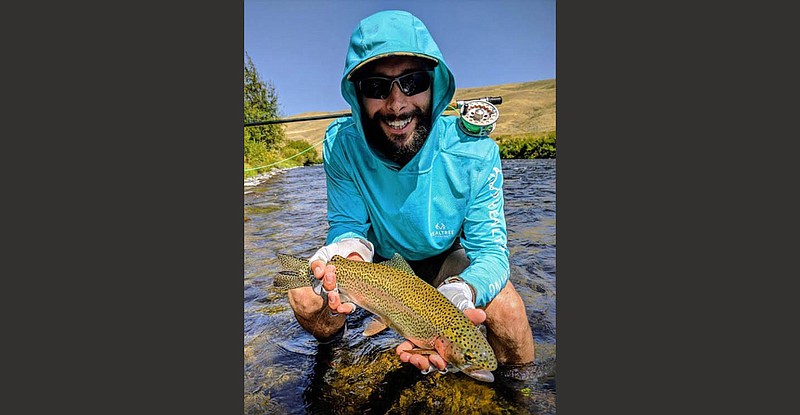 A case of fishing wanderlust has taken Mason Collar of Little Rock to some of the best trout fishing streams out west. (Photo submitted by Mason Collar)

At age 30, Mason Collar of Little Rock reached a crossroads and decided it was a good time to go fishing.

Collar didn’t take an ordinary fishing trip, but a trip of a lifetime, a life-defining trip to the storied trout waters of the American West.

“I decided to take a little time between career changes and try to go hunt down the biggest trout that I could catch on a fly rod,” Collar said.

Everybody knows that the biggest trout swim in Arkansas, but Collar is fishing for something greater. He seeks meaning. Purpose. Validation. Sometimes these things only come to you when you’re waist deep in a cold mountain trout stream.

Collar, a 2012 UALR graduate, returned to Little Rock from Dallas to help run a newly acquired family business. It wasn’t a good fit.

“There was too much office work, more behind-the-computer work than I like,” Collar said. “I like to be out and about, so I made the decision to leave there. We ended up selling it, and I decided I wanted to go on a big adventure.”

Collar obtained a van and outfitted it with a bed, bench, refrigerator, stove and bike rack. The rack holds a mountain bike that Collar uses to reach remote fishing holes that are too far to walk and too rough to drive. He pointed the tires west and drove, intending to stay three or four weeks.

“I looked around at all the places I wanted to fly fish, and I realized I couldn’t do all that in three or four weeks,” Collar said. “That kind of transpired into a month, and then it became two months.”

Collar said he’s always had what he calls a “wild hair” for adventure. He said he spent a month fly fishing in Alaska during his last summer in college

“That was a pretty wild adventure, and I hadn’t had one that was that intense in a while, and between jobs this would be the best time to do so,” Collar said.

Collar drove from Little Rock to Fort Collins, Colo., where he stayed a few days with relatives. His internal compass pointed north, which took him to Wyoming. Collar said he researched potential destinations online to some degree, but his best tips came from visiting with people in bars and restaurants, and hanging around fly shops.

“It’s amazing. When I start talking about what I’m doing, people want to share the knowledge that they have,” Collar said. “A lot of it was just stopping in local fly shops. I’d say, ‘Hey, I’m here for three days. If you were me, where would you go?’ ”

Collar said it takes a little time to establish a rapport with fly-shop owners and employees. Every freelancer is a potential rival, and they prefer to sell advice.

“Their reaction to me is somewhere in between jealousy and hatred,” said Collar, laughing. “I hang out for 20 or 30 minutes. I found that the longer you hang out, the more information — and more accurate information — you get as far as fly fishing and tips.”

One such tip came from a resident in southern Wyoming that told Collar about a remote spot on the Platte River. It was one of those too-far-to-walk, too-rough-to-drive propositions.

“I heard there was some national forest land north of the Miracle Mile that took a little effort to get to,” Collar said. “I jumped on the mountain bike and went about 3 miles through the Wyoming desert to get to a spot where only guides go when they drift down in their drift boats.”

The water there is too rough for the guides to stop or back paddle, so they blow through the area without fishing it.

“Nobody else goes that far,” Collar said. “I didn’t see another person the whole time I was there. That’s where I hooked up with my biggest brown trout. It was 22 inches.”

At Yellowstone National Park, Collar obtained a permit to hike 7 miles into the backcountry to reach Slough Creek. When he awoke the next morning, the temperature was about 40 degrees. He made breakfast and coffee, savored the solitude, then started fishing.

“It’s truly awesome to be out in the wilderness without anybody else around,” Collar said. “I’ve been fishing the Little Red [River] for a long time and I love it, but there are times when it’s kind of elbow to elbow with people. When I get out fishing a little creek that’s 30 to 35 feet wide, where I can see bison feeding in a field next to me, it’s truly beautiful.”

On clear nights, the stars are limitless and brilliant, Collar said.

“From horizon to horizon, there are more stars than the eyes can count,” he said.

Collar has a variety of fly fishing outfits to suit any situation. His main rigs are 5-weight and 3-weight rods.

“I took my 5-weight on the Missouri River because you can hook into some really big fish on the Missouri,” Collar said. “I caught some good ones, but nothing was over 20 inches.

“When I fish smaller rivers like the Gallatin or some of the backcountry lakes, I have a 3-weight. One of my favorite rods is a Tenkara rod. It telescopes down real small so I can throw that in a backpack and catch little brook trout or cutthroats in smaller streams.”

Collar said he fished his first 20 days on the road. At that point, he said he realized he needed balance.

“I realized that I need days to sit back and relax, which is funny to say when you’re talking about a fishing trip,” Collar said. “I learned that I need to just take time to be still, to be thankful for where you’re at and appreciate God’s beauty.”

One of Collar’s favorite experiences was visiting with three old men sitting beside a campfire at a campground.

“I had my windows down when I pulled up, and these guys were belly laughing,” Collar said. “I wanted to be a part of that circle, so I interjected myself until they extended an invitation for me to join them. I haven’t laughed that hard in a long time.”

The men were there to spread the ashes of their oldest brother who had recently died.

“That really stuck with me that they chose joy instead of negative emotions for that moment,” Collar said. “That trip was all about laughter for them when it could have been something different.”

All things must pass. Collar said he has changed a lot during the journey and that it will take an adjustment when he returns home.

“I don’t know if I could go back to a desk job for eight to ten hours a day,” Collar said. “I was joking with a friend that I might have to have a re-entry program when get back to Little Rock where I stay in my van for a couple of weeks before I move back into my house.

“Family has a pretty strong pull, as well.”