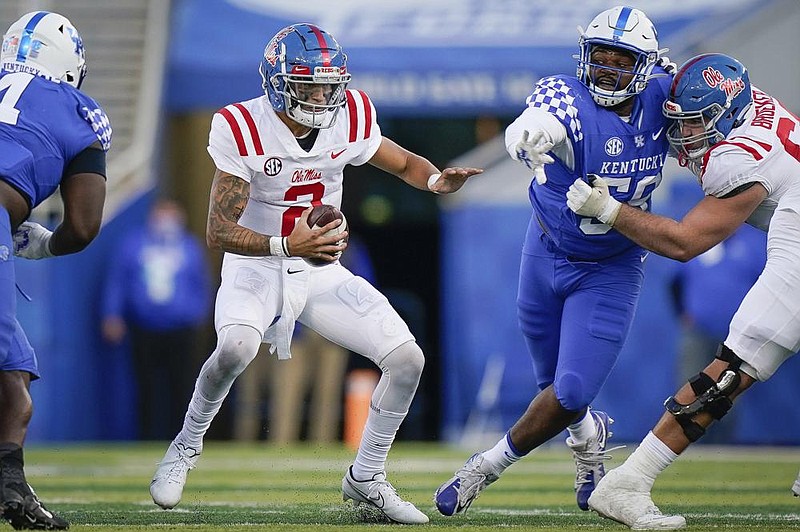 Ole Miss quarterback Matt Corral (2) scrambles with the ball Saturday between two Kentucky defenders during the second half of the Rebels’ 42-41 overtime victory in Lexington, Ky. (AP/Bryan Woolston)

The Rebels quickly made up ground to take a lead, then mounted one last rally in overtime before seizing a huge break to earn a hard-fought win.

Chris Rodriguez's 1-yard run for Kentucky (0-2) with 2:04 remaining forced OT, and Terry Wilson's 10-yard touchdown run gave the Wildcats the initial lead. But Matt Ruffolo missed the extra point, opening the door for the Rebels (1-1) to come back again for the win.

Five-yard runs by Corral and John Rhys Plumlee were followed by a defensive pass interference penalty on Kentucky's Kelvin Joseph in the end zone to put the ball at the 2. Corral hit Moore two plays later.

"Crazy game," Kiffin said. "To be down like that and to come back and go to overtime. ... It was great to see our guys battle back. We didn't play great in a lot of areas, we stutter on offense for a while and obviously didn't stop the run.

The Rebels trailed 28-14 early in the third quarter before Corral, who threw four touchdowns, tossed scoring passes of 24 and 16 yards to Jonathan Mingo to tie the game early in the fourth quarter. The drives covered 75 and 54 yards, and just 2:54 combined. After taking over on downs, Ole Miss used just 47 seconds to go 53 yards and go ahead on Snoop Conner's 1-yard touchdown run with 8:23 remaining.

"Coming off last week, we had to get that bad taste out of our mouth," said Corral, referring to a 51-35 loss to No. 5 Florida. "First win under a new coach, he wouldn't have it any other way, and coming out with a win is a great feeling."

Jerrion Ealy scored from the 1 for Ole Miss on the game-opening drive.

Wilson rushed 22 times for 129 yards and 3 touchdowns, and Rodriguez had 2 touchdowns with 133 yards on 17 carries for the Wildcats.

TUSCALOOSA, Ala. -- Mac Jones passed for a career-high 435 yards and four touchdowns, including a pair of deep throws to John Metchie III and an even longer one to Jaylen Waddle, and No. 2 Alabama romped past No. 13 Texas A&M.

Briefly threatened early, Jones and the Crimson Tide (2-0) flexed their considerable big-play muscle in the passing game to put away the Aggies (1-1). A sign of things to come: His first attempt went 78 yards to Metchie, 'Bama's latest major receiving threat.

Jones topped that with an 87-yard TD to Waddle, who had sprinted past two Aggies defenders to make the grab with nothing but green in between himself and the end zone. Metchie and Jones hooked up for a 63-yarder in the fourth, giving the sophomore five catches for 181 yards.

Jones finished 19-of-26 passing for a second consecutive surgically precise performance marred by one interception off a deflection. Waddle had 142 yards receiving and his touchdown catch was tied for the fifth longest in program history.

It came after three Alabama penalties in four plays. Jones' three career pass touchdowns of 85-plus yards are the most by a Tide quarterback.

Mond put up big numbers but it wasn't nearly enough. He completed 25 of 44 passes for 318 yards with three touchdowns -- and the pick six. Ainias Smith had 6 catches for 123 yards and 2 touchdowns.

NASHVILLE, Tenn. -- Myles Brennan threw for 337 yards and four touchdowns and No. 20 LSU bounced back to beat Vanderbilt.

The defending national champs never trailed after losing their season opener last week to Mississippi State. LSU also extended its winning streak over the Commodores to nine in a series it leads 24-7-1.

The Tigers outgained Vanderbilt 498-266, and the defense came up with two interceptions and a pair of sacks.

Vanderbilt (0-2) had its chances with freshman Ken Seals making his home debut. When Randall Haynie picked off an overthrown pass from Brennan, Seals hit tight end Ben Bresnahan with an 8-yard TD pass to pull the Commodores to 14-7 in the second quarter.

KNOXVILLE, Tenn. -- Tennessee quarterback Jarrett Guarantano was productive through the air and clutch on the ground, accounting for three touchdowns to lead the No. 21 Volunteers to a victory over Missouri.

"There were three times Jarrett didn't make the right read," Tennessee Coach Jeremy Pruitt said. "That's three out of about 76 [plays]. We'll continue to work hard. We put a lot on him."

The win was Tennessee's eighth in a row, tying the Vols (2-0) with Notre Dame for the most among Power Five teams.

Guarantano was an efficient 14 of 23 for 190 yards and a touchdown and had two short touchdown runs as the Vols leaned on their offensive line to control the game.

Eric Gray and Ty Chandler combine for 195 yards on the ground.

Tennessee was only 1 of 11 on third down in last week's win at South Carolina.

"We continue to work hard, but it's easier to be in third-and-6 inches compared to third-and-16 [yards]," Pruitt said

Gray ran for 105 yards, with a touchdown rushing and receiving. Chandler rolled up 90 yards and a touchdown.

GAINESVILLE, Fla. -- Kyle Trask and Kyle Pitts hooked up for two more touchdowns, continuing their hot start and leading No. 3 Florida to a victory over South Carolina.

Trask completed 21 of 29 passes for 268 yards, with 4 touchdowns and 1 interception. His second-quarter fumble kept the Gamecocks (0-2) in the game early.

Pitts finished with four receptions for 57 yards, commanding extra attention and beating South Carolina's top defenders. He nearly made a one-handed catch in the third quarter, but the ball slipped off his left fingertips.

The K2K connection now has six touchdowns in two games, one more than it notched in 2019.

The Gators (2-0) had their way with South Carolina for three quarters in front of 15,120 socially distant fans in the Swamp. They finished with 347 yards and punted twice.

Kadarius Toney put an exclamation point on the victory with a 57-yard touchdown catch late in the third. He somehow broke through three defenders, turning a 7-yard catch into Florida's biggest gain.

He ended with six receptions for 86 yards and a touchdown to go along with 42 yards on two punt returns.