Putin hunkers down through pandemic 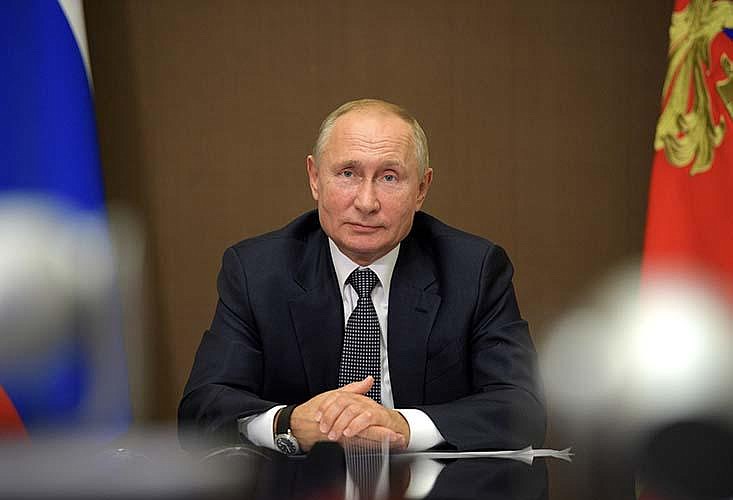 MOSCOW -- The officials from a secretive Russian security force seemed to know exactly what they wanted when they reached out to Olga Izranova's company last spring.

They wanted movable tunnels that douse people in clouds of disinfectant.

"They said it had to be done very fast," Izranova recalls.

She admits the tunnels are of limited efficacy in the coronavirus pandemic, but for her most important customer, every bit counts. The Federal Protective Service, Russia's answer to the Secret Service, has helped build a virus-free bubble around President Vladimir Putin that far outstrips the protective measures taken by many of his foreign counterparts.

Russian journalists who cover Putin have not seen him up close since March. The few people who meet him face-to-face generally spend as much as two weeks in quarantine first. The president still conducts his meetings with senior officials -- including with his Cabinet and his Security Council -- by video link from a spartan room in his residence outside Moscow, which has been outfitted with Izranova's disinfectant tunnel.

During the pandemic, Putin's Russia has often been compared to the United States and Brazil, two other large countries whose leaders have played down the disease's risk and saw it spiral out of control. But while President Donald Trump and President Jair Bolsonaro of Brazil have chafed against restricting their own movements, Putin has retreated into an intricate cocoon of social distancing -- even as he has allowed life in Russia to essentially return to normal.

The contrast between the behavior of Putin and that of his people now looms large, as a second wave of the pandemic threatens to wash over Russia. In Moscow, where people packed indoor bars and restaurants all summer with few masks in sight, the number of daily reported new cases tripled to more than 2,300 in recent days.

As Russia lifted last spring's lockdown, Putin presided over ceremonial events that seemed designed to exude a sense of normalcy. Behind the scenes, they were anything but normal.

Dozens of World War II veterans joined Putin on the risers in Red Square in June when he presided over a military parade commemorating the 75th anniversary of the Soviet Union's victory over Nazi Germany. But before being allowed within breathing distance of Putin, the veterans had to spend two weeks in quarantine at an isolated health resort.

"We went for walks, were bored, sat around and breathed the air," said Lev Litvinov, a 100-year-old veteran.

The logistics proved so taxing that Litvinov did not actually make it to the parade. He said that after spending two weeks in quarantine, he got sick on the winding drive through the countryside toward Red Square, 50 miles away. He was taken instead to a health center, where he spent another week.

"Most importantly, this is about their health, the veterans' health," Dmitri Peskov, Putin's spokesperson, said in June of the decision to quarantine the attendees.

Putin's diligence in protecting himself is striking because in communicating with the Russian public in recent months, his government largely declared the virus vanquished.

"I would like to congratulate you on our latest joint victory," Mayor Sergey Sobyanin of Moscow wrote to Muscovites in June, announcing the end of the city's lockdown. Indoor dining at bars and restaurants resumed just two weeks later.

Critics said Russia rushed to end its coronavirus restrictions in order to lift people's spirits before the July 1 referendum on constitutional amendments that opened the door to Putin remaining president until 2036. When Putin announced in August that Russia had registered the world's first coronavirus vaccine, it appeared that the country was delivering a final, crushing blow against the pandemic.

"These common efforts and targeted and, as it turned out, very effective solutions have helped us to pass the peak of the epidemic and create conditions for further work," Putin said afterward in an interview with state television.

Families filled Black Sea resorts and adults returned to their offices. Across the country, children went back to school on schedule Sept. 1.

But Putin remained in self-isolation. He continued to hold most of his meetings with government officials by video conference from a room in his suburban Moscow estate, Novo-Ogaryovo.

The residence, like the Kremlin, has been outfitted with a disinfectant tunnel made by Izranova's industrial-cleaning equipment company, Mizotty, in the Russian city of Penza. Walking through the tunnel, she says, feels and smells like passing through a cloud of pool-water mist.

Putin's videoconferencing room -- beige chair, walls, telephones; a Dell computer screen, blank except for a photograph of the Kremlin as the desktop background -- became so familiar that state television recently broadcast a segment on it.

"These are the microphones on the president's desk," the reporter intoned on the Sunday prime-time show "Moscow. Kremlin. Putin." "When the indicator lights are red, sound is not transmitted."

That a state television reporter got to visit and interview Putin in August was an exception. Otherwise, the Kremlin has cut off journalists' ability to see Putin in person, even for those who used to do so regularly, since March.

"The work has been absolutely remote," said Andrei Kolesnikov, a journalist who has covered the Kremlin for Kommersant, a daily newspaper, since 2002. "I know for a fact that no text journalist, myself included, has seen the president in all the days of the coronavirus."

Peskov, the Kremlin spokesperson, did not respond to requests for comment about the president's coronavirus precautions. But Kolesnikov said he understood that the governors, business leaders and senior officials on Putin's agenda are given a choice: meet by video link or spend up to two weeks in quarantine for an in-person encounter.

"Since he misses real-life interaction with people, you would probably have the chance to drink tea with him afterward" in the case of an in-person meeting, Kolesnikov said. "I think that they, of course, choose quarantine in that situation."

Putin's extreme caution reflects not only his age -- he is 67, putting him at relatively high risk of severe illness from the coronavirus -- but also what critics describe as paranoia honed during his former career as a KGB spy. He made headlines last year when he sipped from his own mug at the Group of 20 summit in Japan, even as the other world leaders drank from wineglasses.

According to the Kremlin's website, only one person has met with Putin face-to-face more than once since April: Igor Sechin, a former KGB officer and a close associate since the 1990s. He now runs Rosneft, the Russian state oil giant, and saw the president in August and in May.

A Russian investigative news outlet, Proekt, reported Wednesday that authorities had set aside two large health resorts in the Black Sea city of Sochi for people quarantining before meeting Putin. In September, 30 nuclear industry workers who had quarantined in Sochi were then flown to Moscow to meet with the president at the Kremlin, according to Proekt.

Putin's European Union counterparts have started crisscrossing the continent again, including for in-person summit meetings in Brussels. Putin, by contrast, has not gone abroad since January.

Peskov hinted this week that the president would resume foreign travel only after he gets a covid-19 vaccine. But he advised that Putin was not ready to get the shot yet, despite all the state-media bombast about Russia's world-leading achievement in developing it.

"It's natural that when it comes to the head of state, special precautionary measures are in effect," Peskov told reporters.