Flames rage as fighting, munitions from years of war keep firefighters at bay by MARIA VARENIKOVA THE NEW YORK TIMES | October 4, 2020 at 5:18 a.m. 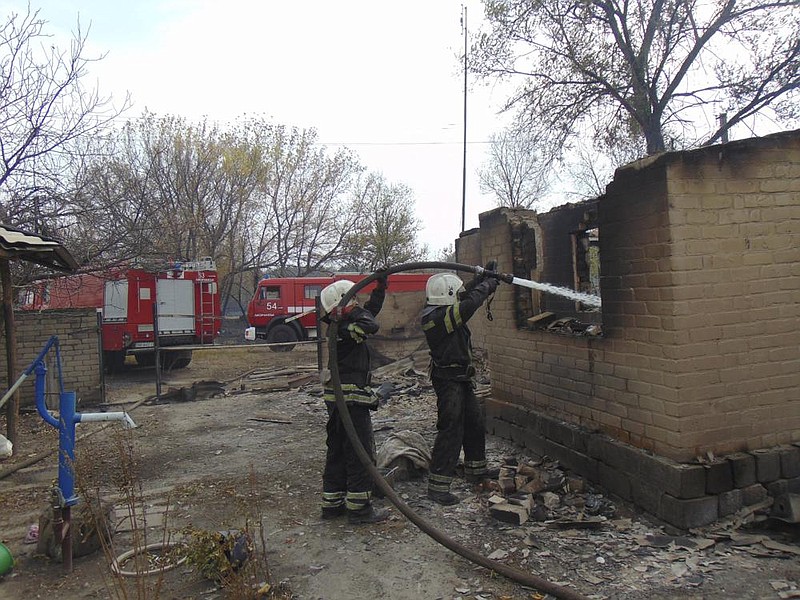 Firefighters, in this photo provided by the Ukrainian presidential press office, extinguish a blaze Thursday after a wildfire ravaged a village in Ukraine’s Luhansk region. (AP/Emergency Situation Ministry)

VINNYTSIA, Ukraine -- A wildfire burning out of control in the war zone in eastern Ukraine is setting off land mines in a buffer area between government forces and Russian-backed separatists, complicating the already dangerous work of fire crews facing hot, dry and windy conditions.

The fire is burning through an area of grassy hills and pine forests, all tinder dry, in the Luhansk region, near the border with Russia and divided by the front line in the war, which began in 2014 and has settled into a long stalemate.

The explosions reported by firefighters and military observers near the front line, called the line of control, have piled one problem on top of another, hampering firefighting efforts.

"We cannot reach it because of the mines, and we cannot use aviation because of the war," Mykhailo Shevchenko, a member of the city council in Stanytsia Luhanska, a nearby town, said in a telephone interview. Firefighting airplanes could become targets of anti-aircraft systems near the front.

A cease-fire agreed to in July has mostly held, but mines, unexploded artillery shells, lost bullets and other hazards litter the area after years of conflict. There are no indications either side has tried to use the fire or smoke to restart hostilities.

Shevchenko said he stood near part of the wildfire zone for a time and heard "continuous explosions of different strengths, from bullets to anti-tank mines."

Local residents have told Ukrainian authorities that artillery shelling into the dry forest touched off at least one wildfire, but President Volodymyr Zelenskiy has said the cause is still unknown. Whatever started it, hot, dry winds have fanned the flames.

"This is not the best year for our country in terms of natural disasters and other tragedies," Zelenskiy said at a briefing Thursday. The coronavirus pandemic has further complicated firefighting and evacuation efforts.

Seven people have died in the wildfires, 18 have been injured and another four are missing, all unrelated to the exploding ordnance, officials said. The fires have destroyed or damaged about 400 houses, forced the closure of the region's only crossing point over the front line, and destroyed a Red Cross aid point.

Evacuees, meanwhile, are at risk of catching the virus in crowded shelters.

When the fire approached Olhovski Dachi, a summer home community, Tetiana Vasiukova boarded a bus with about 30 other residents and spent the night with them on folding beds in a community center.

While worried about the virus, Vasiukova said she mostly felt "very depressed" to see the region's forests burn.

Farther from the front, the fire forced the evacuation of a dormitory for schoolchildren, many of whom had moved there from front-line villages at risk of artillery shelling. Liubov Ponomarenko, 15, said in a telephone interview that she had been enjoying the sense of safety of the dormitory before the fire arrived.

Deadlier and more frequent wildfires are occurring around the world, often linked to climate change. In Australia's wildfire season, wind and heat fanned what Australians called "megablazes." Major wildfires exploded on the West Coast of the United States in the worst fire season on record there.

Ukraine has been no exception. The number of wildfires in Ukraine tripled during the first half of the year; the burned area was 40 times larger compared with the same period last year.

This spring, a large wildfire burned through the so-called Zone of Alienation around the Chernobyl nuclear disaster. That fire burned through a radioactive forest, causing radiation to waft into the air with smoke that blew over Kyiv, the capital, though not at concentrations considered harmful, officials said.