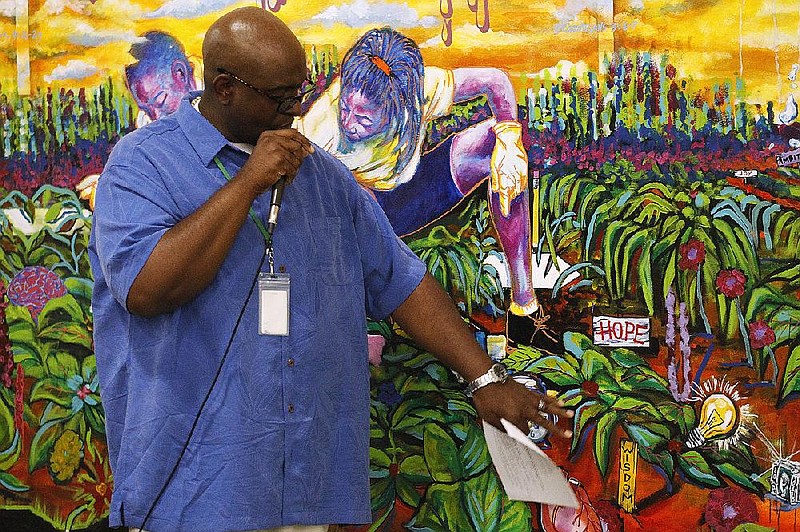 Arkansas Democrat-Gazette/THOMAS METTHE -- 7/26/2018 -- Artist Rex Deloney explains how he came up with the idea and vision for his mural from talking to P.A.R.K. graduates during the unveiling ceremony for the Class of 2018 mural on Thursday, July 26, 2018, at P.A.R.K. in Little Rock. Deloney said he started working on the mural in June and guesses he put in about 80 hours of work. ( Tommy Metthe / Thomas Metthe)

Rex DeLoney's art is brash, bold and demands the viewer's full attention. Its message is current and relevant and on display at the Arts & Science Center for Southeast Arkansas

The Central Arkansas artist's solo exhibition titled "Brothers by One: The Black Athlete and Social Justice" opened last week and explores the ways Black athletes have used and continue to use their celebrity to draw attention to social injustice.

Chaney Jewell, arts center curator, described his abstract realism pieces as "invigorating and importantly, his work is timely and highlights the dignity of the athlete."

Jewell describes his work as abstract realism, saying, "He's able to use bright colors and lines to capture the dignity of the athlete."

DeLoney said, "My painting style deals with emotion," and it's his own personal challenge to take a spontaneous moment and capture it on the canvas.

He has found inspiration in the church, on the streets, as well as in sports, he said.

Although DeLoney is now about 55, his message of social dissent and dissatisfaction has grown stronger, more sophisticated and continues to flavor his work.

The exhibit opened last week and runs through Jan. 9.

DeLoney, who has long specialized in sports, reaches into the past to illustrate early generations' struggles. For example, one of his pieces explores Muhammad Ali and his late 1960s-era stance against the Vietnam War.

DeLoney doesn't remain in the last century, instead exploring current issues through the lens of sports stars.

For example, there's a piece in tribute to San Francisco 49ers quarterback Colin Kaepernick, who took a knee in protest against police brutality during the national anthem.

He was sidelined for his actions, and his career has never been the same.

DeLoney also shines a light on the fatal police shooting of 26-year-old Breonna Taylor in Louisville, Ky., through a piece titled "Justice for Breonna Taylor."

The Black medical professional was shot in her home during a drug raid conducted.

Another piece, "Out of Breath: Jaylen Brown," in the collection includes Celtic guard Jaylen Brown, who drove 15 hours, from Boston to Atlanta, to lead a peace protest for George Floyd.

Floyd was killed by police and the moment -- several minutes, in fact -- was captured on video.

The Black man repeatedly said to the four officers at the scene, "I can't breathe," and his death sparked national protests.

Brown continues his social awareness by supporting the George Floyd Justice in Policing Act of 2020.

On the Arkansas Arts Council website, DeLoney wrote: My artwork is focused on storytelling, symbolism, and spirituality. My goal is to reach the viewer emotionally and spiritually by creatively using color to awaken perceptual triggers in the visual mind. I employ visually thick words, phrases, or quotes to create imagery that symbolizes the hopes, dreams, and struggles of the African American Culture.

"We hope this exhibition is informative, and that it gives people a sense of hope," Jewell said. 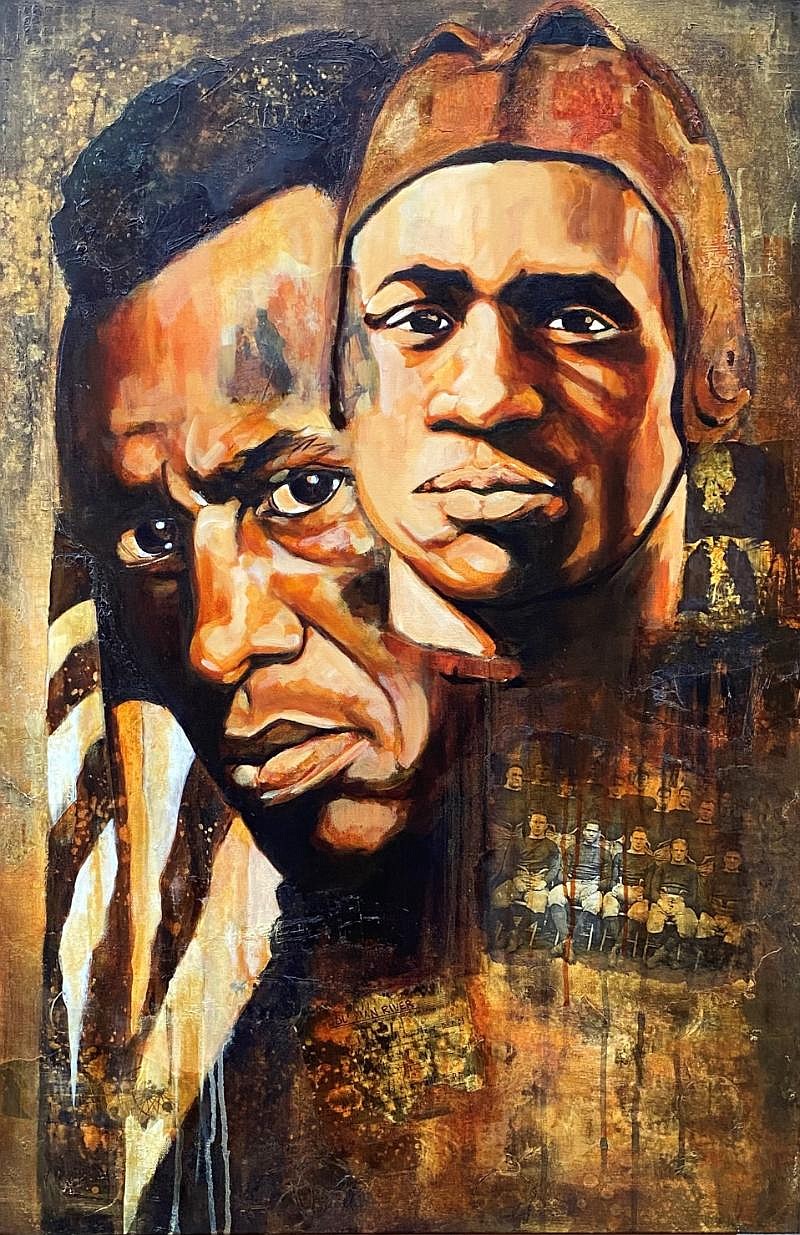 “A Wound That Would Not Heal: Paul Robeson” During his time at Rutgers College, Paul Robeson was the only Black student on campus. He played football for the college from 1915 until 1919. (Special to The Commercial)