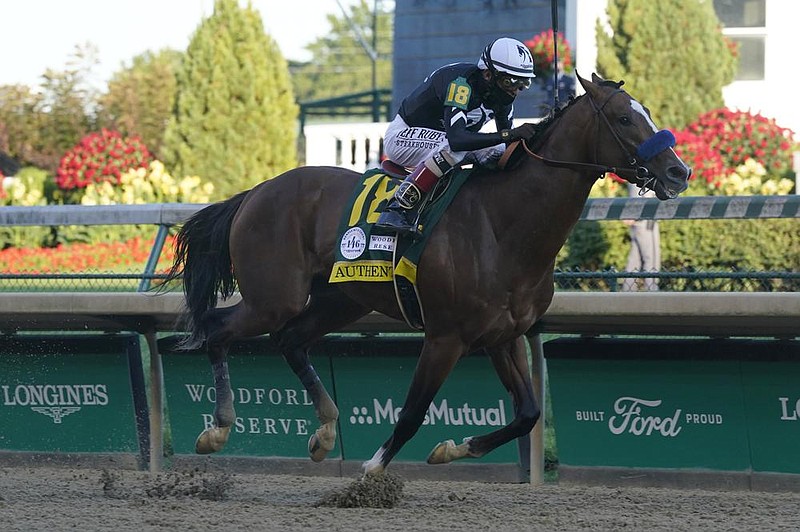 John Velazquez rides Authentic to the finish line to win the 146th running of the Kentucky Derby at Churchill Downs in Louisville, Ky. After an out-of-order Triple Crown with a different horse winning the Belmont, Kentucky Derby and Preakness, it might be a long time until Tiz the Law, Authentic and Swiss Skydiver all race against one another. That is, unless Swiss Skydiver challenges them and older males in the Breeders’ Cup Classic on Nov. 7. (AP/Darron Cummings)

BALTIMORE -- More than two months after Tiz the Law blew away the field in the Belmont, Authentic fended off his charge and won the Kentucky Derby. Four weeks later, filly Swiss Skydiver challenged and beat Authentic in the Preakness.

The Triple Crown races run out of order and later in the year produced three different winners and quite the competition for 3-year-old horse of the year. But it might be a long time -- if ever -- until Tiz the Law, Authentic and Swiss Skydiver all run against each other in the same race.

"It sure made it interesting to have a great debate: Which of the three winners would do it again if they, all three, were head to head?" said NBC Sports analyst Kenny Rice, one of the few people to witness all three 2020 Triple Crown races in person. "I would love to see all three of them be able to run against each other again, but I don't think that's going to happen any time soon."

Tiz the Law and Authentic should get their Derby rematch in the $6 million Breeders' Cup Classic on Nov. 7, and Swiss Skydiver is eligible for that race. But trainer Kenny McPeek is more likely to enter her against other fillies and mares in the $2 million Breeders' Cup Distaff that same day.

"We can look at both races, I suppose," McPeek said after Swiss Skydiver won the Preakness. "But I would say right now we would probably lean towards the older fillies and mares. But nothing set in stone."

A head-to-head-to-head showdown with older stars like Improbable and Maximum Security and promising 3-year-old colt Art Collector also in the field would make the Classic the race of the year. But after McPeek said he would've avoided running Swiss Skydiver in the Preakness had Tiz the Law been entered, she's probably going to take on a different kind of challenge in the Distaff.

The Classic with or without Skydiver is shaping up to feature tons of talent. Trainer Barclay Tagg said Friday things are going well with Tiz the Law, and Authentic will prepare to join Bob Baffert's Improbable and Maximum Security in the race as long as he continues to train properly out of the Preakness.

"It should be a really good Breeders' Cup, as it usually is, but the Classic could really be something special this year," Rice said. "This could be one of the better Classics, and while people will want to see how the 3-year-olds match up, I think it's going to be awful tough to beat Improbable or Maximum Security."

McPeek likes the 1 1/4-mile distance of the Classic for Swiss Skydiver but said Sunday he and owner Peter Callahan wouldn't make a rash decision. That doesn't mean he doubts her abilities after she became the sixth filly and first since Rachel Alexandra in 2009 to win the Preakness.

This unique Triple Crown season, with the races run out of order for the first time since the 1930s and in the summer and fall rather than the spring, produced rivalries reminiscent of the legendary Affirmed and Alydar and some of strong competition. There wasn't one dominant champion horse, but even after injuries knocked Nadal, Charlatan and Maxfield off the trail, this 3-year-old crop showed it's one of the deepest in recent history.

That's perhaps a silver lining of an unusual year in horse racing.

"I can't recall when we've had this many good 3-year-olds," Rice said. "We got to see most of the good 3- year-olds still in training run in the Triple Crown races. That to me was the upside to it. We got three winners that all turned in impressive performances, what they had to to win the races and at least a great discussion as to who's the best of the three." 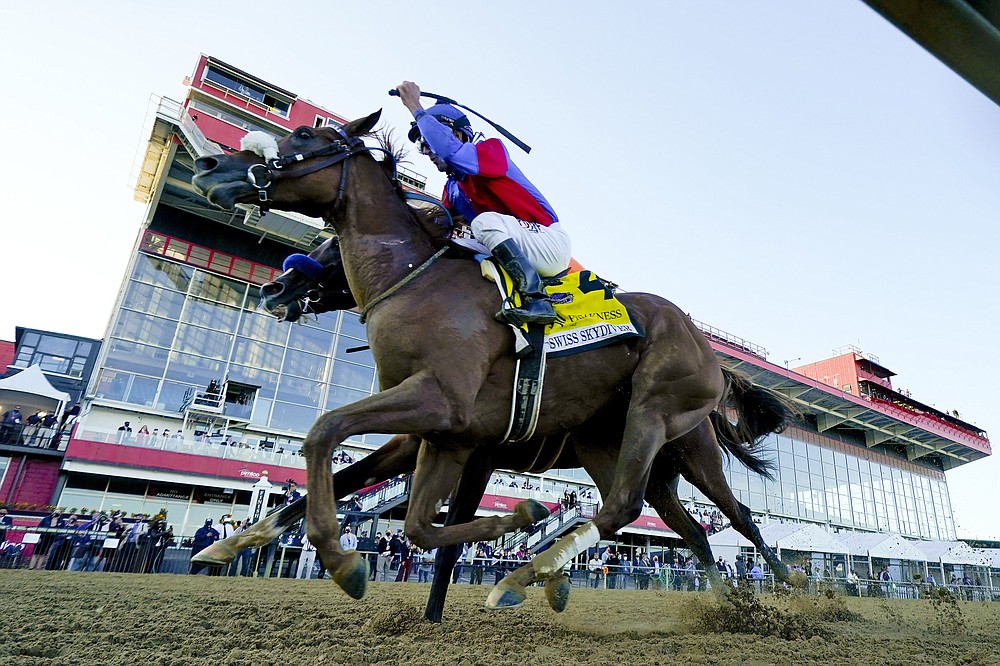 FILE - In this Oct. 3, 2020, file photo, Swiss Skydiver (4), with Robby Albarado aboard, wins the 145th Preakness Stakes horse race at Pimlico Race Course in Baltimore. Obscured behind Swiss Skydiver is Authentic, ridden by John Velazquez. After an out-of-order Triple Crown with a different horse winning the Belmont, Kentucky Derby and Preakness, it might be a long time until Tiz the Law, Authentic and Swiss Skydiver all race against one another. That is, unless Swiss Skydiver challenges them and older males in the Breeders’ Cup Classic on Nov. 7, which is expected to be a Tiz the Law/Authentic rematch. (AP Photo/Steve Helber, File)
ADVERTISEMENT