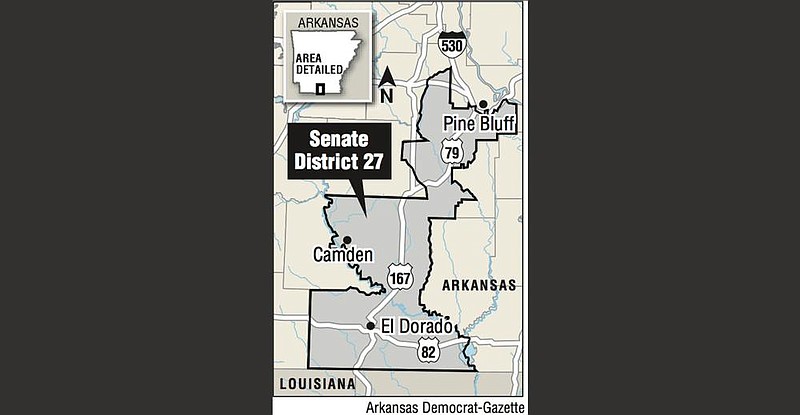 A map showing the location of Senate District 27.

Attorney Keidra Burrell of Pine Bluff says she'll provide better representation for Senate District 27 than the incumbent, state Sen. Trent Garner of El Dorado, does in her bid to defeat him in the Nov. 3 general election.

Garner, a Republican, says he has successfully represented the district since he became a senator in 2017.

Burrell, a Democrat, said voters should cast their ballots for her because "I believe in people over politics."

"The people in District 27 don't believe their voices are being heard," she said. "I want to be the active listener. ... We have to think about what are the needs of our district."

Burrell, 41, served as assistant district counsel to the U.S. Army Corps of Engineers' Little Rock District for about a year before she declared her bid for the state Senate in November. She served as the chief of staff and assistant to Pine Bluff Mayor Shirley Washington from 2016-18. She has lived in Arkansas for 6½ years.

She previously served as chief legal counsel for the Northwest region of the Louisiana Department of Environmental Quality from 2010-14. The New Orleans native owns child development facilities called Krescent City Kids in New Orleans and the Audubon School in Pine Bluff, and also owns real estate investment companies Jackson and Emerson LLC and SRAMG in New Orleans. She is married with three children.

In addition to serving as a state senator, Garner, 36, is a part-time attorney. He is a former field representative of Republican U.S. Sen. Tom Cotton of Little Rock, and served two tours in Afghanistan with the U.S. Army Special Forces. He is married with two children.

Garner said voters should reelect him because he's a proven leader. He was born and raised in the region and attends many community events to listen to constituents' needs and concerns.

"I think I have been a strong voice for south Arkansas in the Legislature," he said.

As examples of his accomplishments, Garner cited Act 551 of 2019, which requires two legislative committees to study veterans' issues, including suicide, and make recommendations.

He was behind Act 816 of 2019, which bars state or local governments in a lawsuit or administrative proceeding from compelling religious leaders to testify about their sermons, teachings and instructions. The law also bans those governments from ordering the production of written copies or recordings of those.

Burrell said her top priorities would include more state funding for pre-kindergarten programs because each child should have access to such a program, and that access shouldn't be based on the family's socioeconomic status.

She said she also wants to provide incentives to teachers to encourage them to stay in south Arkansas; push for more broadband access in the area; and provide access to affordable, high-quality health care.

Small businesses also are on her list, including more grants and loans amid the covid-19 pandemic and more incentives to hire more employees and pay higher salaries.

Garner said his top priorities would include increasing the amount of a used vehicle's price that is exempt from the sales tax. The exemption is now $4,000 a vehicle.

He said he also wants to push for funding for earlier diagnosis of developmental disabilities in children, to enable them to get treatment and education to succeed in life.

Garner also wants legislation to allow people with a criminal record to get an occupational license after a certain period of time in order to get "a fresh start on life and be more productive members of society."

Garner, who is a co-chairman of the Arkansas Early Childhood Well-Being Caucus, said he could support more state funding for pre-kindergarten programs as long as the funding is available and it's properly spent.

Burrell said she supports Arkansas' version of Medicaid expansion called Arkansas Works, which provides health insurance to about 280,000 low-income Arkansans, because she doesn't want families to be more burdened trying to pay for their health care. The federal government provides 90% of the cost of the program and the state provides the other 10%.

Garner said, "I think there is a better health care system than Medicaid and the private option."

He said he would be looking at other options should the federal government make changes to the federal Patient Protection and Affordable Care Act and give states more flexibility to put together their own more robust free market plan, he said. The federal law makes Medicaid expansion programs optional for the states.

Burrell said she is "vehemently against" stand-your-ground legislation.

Stand-your-ground legislation that would have eliminated the "duty to retreat" from the state's self-defense laws failed to clear the eight-member Senate Judiciary Committee by a single vote in the 2019 regular session. That bill was opposed by a coalition of police chiefs, sheriffs and prosecutors.

"People need the ability to protect themselves and their families in this troubled time," he said.

Burrell said she supports legislation to penalize hate crimes, noting Arkansas is one of three states without such a law.

"It shows people in our community and people around the nation that Arkansas won't tolerate violence against people because of their race, gender preference and religion," she said. "This is a step of progress."

Garner said he could support a version of hate crimes legislation, but not the draft bill of Senate President Pro Tempore Jim Hendren, R-Sulphur Springs.

Hendren's proposal would create an enhanced penalty for crimes committed against people based on their race, ethnicity, religion, disability, sexual orientation or identity, along with other distinguishing factors such as homelessness or service in the armed forces. Republican Gov. Asa Hutchinson has said he would sign the bill if the Legislature approves it.

Garner said he opposes the bill in part because of what he called the "rapist loophole."

"Rape is a hateful act and there is an exemption for those type of crimes," he said.

State law allows for increased penalties for rape in some circumstances.

Burrell said Hendren's draft legislation "is the best draft we have and we need to go with it."

As for abortion, Burrell said, "In my personal life, I am pro-life.

"I won't personally have an abortion," she said, but she won't impart her personal beliefs on other women and she supports a woman's right to choose whether to have an abortion.

Garner said he's "pro-life" and believes every life should have a chance to live and there shouldn't have an artificial ending.

He noted the Legislature enacted his Act 619 of 2019 that prevents a doctor from performing an abortion with the knowledge that a woman is seeking it "solely on the basis" of a prenatal diagnosis of Down syndrome.

The act has not been enforced because of an injunction by a local federal judge. The injunction is on appeal.

Burrell said she will vote for Issue 1 on the general election ballot. Issue 1 is the proposed constitutional amendment that would permanently extend the 0.5% sales tax for highways and roads that voters approved in November 2012 and was to expire after 10 years.

"I don't like putting taxes in the constitution, but if it helps the people of my district, then I will do what needs to be done," she said.

State officials project Issue 1, if approved by voter, will raise about $205 million a year for highways and about $43 million a year each for cities and counties for their roads.

Garner said he will vote against Issue 1.

"I think we need more for highways and a better way to fund it than through a permanent sales tax," he said.

Garner said state government should stop growing in some areas and use the increased general revenue tax collections for highways, and save Arkansas families $100 to $200 a year in sales taxes. 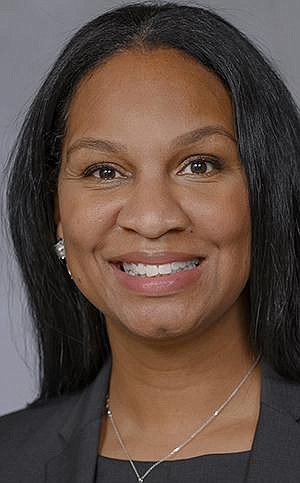 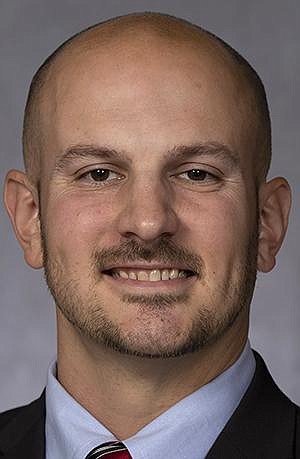