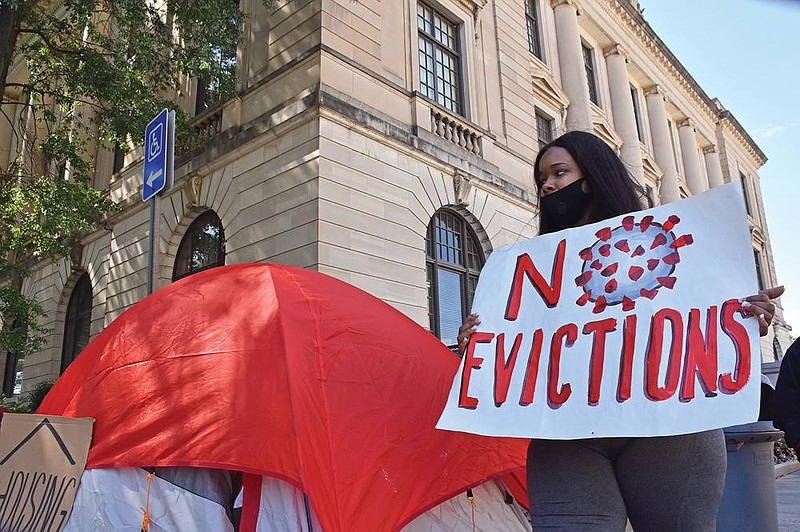 FILE — Alexis Palmer participates in a protest outside the Pulaski County Courthouse in Little Rock against evictions for nonpayment of rent in this Oct. 1, 2020 file photo. (Arkansas Democrat-Gazette/Staci Vandagriff)

A Pulaski County judge explains to an apologetic tenant that the time for negotiations has passed.

Another judge tells a woman that verbal agreements don't matter; all that matters is what's written on the lease.

She grants the order to evict.

A third judge takes less than two minutes to rule on a case in which the tenant didn't show up to defend himself.

Of six unlawful detainer civil hearings in Pulaski County Circuit Court last week, evictions were granted in all but one. No tenants had legal representation present; some landlords did.

In the case in which no eviction was granted, neither party appeared in court.

To learn more about eviction proceedings during the covid-19 pandemic, the Arkansas Democrat-Gazette attended all scheduled unlawful detainer tenant eviction hearings in Pulaski County Circuit Court last week. Most evictions in the state occur under Arkansas' unlawful detainer statute, although that is not the only method.

The hearings took place as Arkansas and the nation are under a ban on most renter evictions. To slow the spread of covid-19, the federal Centers for Disease Control and Prevention stopped many evictions beginning Sept. 4. The ban expires at year's end.

Eviction filings under Arkansas' unlawful detainer statute have risen every month since the pandemic began, a recent Democrat-Gazette review found. Until last month, they were still down compared with years past. In September, there were 537 filings, compared with 451 in September 2019.

The CDC order forbids evictions of tenants for nonpayment of rent if they submit a signed form for each adult in the dwelling declaring that they qualify under five conditions. Tenants must:

• Have "used best efforts" to obtain government assistance for rent or housing.

• Have made less than $99,000 a year, not have been required to report 2019 income to the government, or have received a stimulus check under the CARES Act.

• Be unable to pay the full rent or housing payment because of a loss of income, loss of work or wages, or extraordinary out-of-pocket medical expenses.

• Be facing a situation in which they would probably be homeless or forced into a congregate-living setting if they were evicted.

The order does not halt the requirement to pay rent or late fees.

In one Pulaski County case last week, plaintiff Westbridge Apartments requested the hearing be canceled because the tenant turned in a signed copy of the form contained in the CDC order.

"As a result thereof, the plaintiff is prohibited from evicting the tenant at this time," reads a Sept. 25 letter from the attorney representing the Little Rock apartments.

The lawsuit claims the defendant owed $1,450 in rent, late fees and other charges.

In most cases, when tenants know to turn in the signed form, that's enough to halt the eviction, attorneys from Legal Aid of Arkansas and the Center for Legal Services said.

"I think that a lot of it is stopping there [with the landlord]," said Kendall Lewellan, managing attorney for the Center for Legal Services. "I can only speak for our clients. But when our clients present their landlords with the form, they are more likely to enter into some kind of repayment agreement."

Some tenants, interviewed during a small protest calling for funds for rental assistance and other tenant help Thursday in front of the Pulaski County Courthouse, reported extra scrutiny from their landlords after turning in their letter forms.

Alexis Palmer, a 25-year-old student at the University of Arkansas-Pulaski Technical College, said she turned in a CDC declaration form at the beginning of September after getting a notice to vacate. Since then, she said, her property manager has asked her repeatedly about guests at the complex, including at least one whom Palmer said she didn't know.

"She's been picking at me," Palmer said.

The computer technology student said that when the pandemic hit, her hours as a bartender at Red Lobster were cut. She looked for another job, but the one she found in retail sales didn't provide enough hours to cover rent.

"I don't know what's going to happen," she said. "But I know that an eviction is not going to help."

Unlike Palmer, many tenants simply don't know about the CDC order, said Ely Frankley, who works with the advocacy group Arkansas Renters United. Frankley spends her days going to apartment complexes, knocking on doors, handing out copies of the declaration form and educating people about what the order means.

She said that usually if it's her first time at a complex, most of the residents "do not know about it at all."

But she often goes back more than once to work with tenants.

Daniel Oliver, who had an order to evict granted against him in Pulaski County court Wednesday, said afterward that he'd never heard of the CDC order. It may not have applied to his case because the eviction took place so his landlords could sell the mobile home he occupied.

Oliver said during the hearing that because of the pandemic, he'd lost his second job working security at bars.

"We never wanted to be landlords," said one of the owners.

Oliver was asked to leave, and he told the judge that he wasn't financially able to find a new place. He added that the mobile home was the best place he'd ever lived and that he didn't want to go.

"The problem is that you don't own it," 9th Division Judge Mary McGowan said. When he asked how long he had before he needed to vacate, she told him, "in all due haste, you need to" get out because the sheriff would soon remove him.

On his way out of the courthouse, he said he would be couch surfing -- staying in friends' or family members' homes -- for the foreseeable future.

Another Wednesday hearing involved a woman who had moved into her mother's rental to help care for her after an injury. But the lease said only one adult could live there.

The landlord, who like the tenant had no attorney, said the extra person caused the septic tank to overflow.

"She moved in and then this covid thing happened, so she just stayed," the mother, who testified during the hearing, said of her daughter.

The daughter told McGowan that they'd had a verbal agreement with the landlord.

"That really has no legal implication at all," McGowan said.

When either side tried to object to evidence, McGowan said their objections weren't valid, informing them that this wasn't "TV court."

She granted the eviction and gave 30 days to vacate.

In a Tuesday case in Judge Herbert Wright's court, the defendant did not appear for the hearing conducted via Zoom.

"Please tell me what the issue is," the 4th Division judge said.

"The tenant hasn't paid rent for several months and refuses to move," the plaintiff replied.

"Writ is granted," Wright said, setting an Oct. 5 date and ending the hearing.

Second Division Judge Chris Piazza asked whether tenants in both his hearings last week had turned in the CDC declaration form, and neither had.

In a hearing last Monday, a tenant was evicted for nonpayment of rent. The Little Rock resident owed his landlord $2,085 in rent and $210.08 in utilities for March, April and May. The tenant was evicted and given five days to leave.

"All I want is him out of my house, sir," she said, "because I can't keep paying mortgage" without the rent.

Another tenant, whose landlord sued to evict her for nonpayment of rent, said in a Thursday hearing in Piazza's court that she'd lost income because of the pandemic and needed more time to pay.

"I'm doing my best to get caught up," she said.

Piazza told her that she couldn't negotiate in court -- that was up to her landlord. According to court filings, the Little Rock woman had missed rent in August and owed $610 in rent plus $10 per day in late fees. The case was filed Aug. 18.

"What do I need to do to stop it?" she asked during the virtual hearing. "Is there anything I can do?"

The eviction was granted. 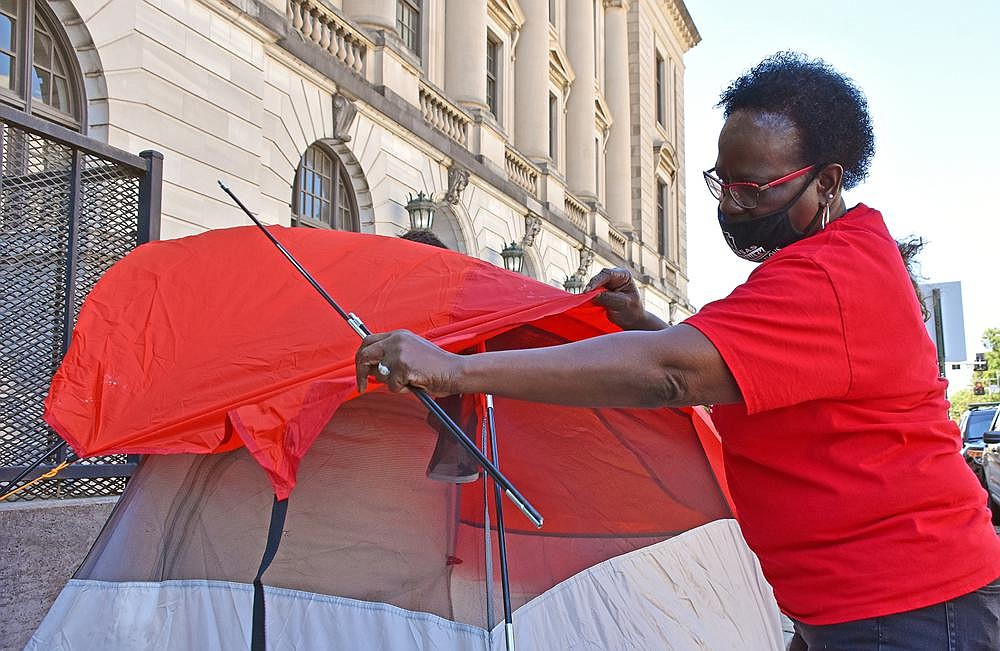 Bobbie Taylor, an organizer for Arkansas Community Organizations, puts up a tent Thursday outside the Pulaski County Courthouse in Little Rock during a protest against evictions. (Arkansas Democrat-Gazette/Staci Vandagriff)
ADVERTISEMENT