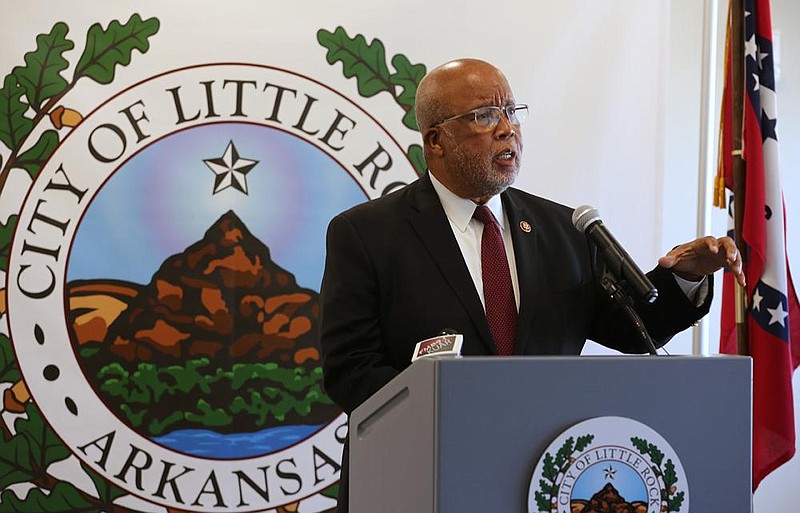 LITTLE ROCK -- The chairman of the U.S. House Homeland Security Committee said the cooperation between local and federal law enforcement agencies in Central Arkansas that he saw on display Monday was designed to keep the United States safe.

U.S. Rep. Bennie Thompson, D-Miss., in Little Rock to attend a city-sponsored roundtable on infrastructure and security, said Congress fostered that cohesion when it created the U.S. Department of Homeland Security in the aftermath of the Sept. 11, 2001, terrorist attacks.

The department is an umbrella for nearly two dozen previously independent federal law enforcement agencies, including the Transportation Security Administration, Immigration and Customs Enforcement, Border Protection and the Secret Service to provide better coordination to defend the American homeland, he said.

"We heard from the state police, local law enforcement as well our federal partners that the communications is working, but also the training and cooperation that goes with that communication," Thompson said. "So I'm happy to say to the citizens of this community ... they're doing exactly what we expected them to do to keep these communities safe."

Thompson made the remarks at a news conference following a briefing with local law enforcement leaders and tours of the Port of Little Rock and Bill and Hillary Clinton National Airport/Adams Field as part of the City of Little Rock's second annual roundtable on infrastructure with a focus on security this time.

Central Arkansas, in addition to being home to the state's capital city, its largest airport and the port, also has other critical infrastructure in Interstates 30 and 40 as well as major utilities such as Central Arkansas Water and the Little Rock Water Reclamation Authority.

"In the current challenging times, we thought we needed to have a special understanding of homeland security and its impact on infrastructure here in the city of Little Rock," Little Rock Mayor Frank Scott Jr. said.

The news conference was the only public portion of the roundtable. An agenda showed it began with a breakfast served in an outside ballroom at the Robinson Center.

The nation's biggest security challenge continues to be the "lone wolf," a terrorist who is not part of a group or directed by an outside organization, Thompson said.

"It's hard to predict when those occurrences will happen."

Thompson said a "growing threat" was domestic terrorism, including"right-wing extremists and that ideology."

Another concern is the nation's ability to respond to natural disasters, he said, noting that the Federal Emergency Management Agency is under the Homeland Security umbrella.

"We've had more hurricanes this season than we've had in quite a while, to the point where we ran out of names," Thompson said.

And no matter how much everyone is prepared for disasters, they will happen and people will get hurt, he said.

"Somebody will ask me, 'Can you guarantee that with all the money we put in, that nothing will never happen?'" Thompson said. "No, I can't. But I can tell you if it happens, we have trained men and women there to address whatever that tragedy is and to the extent we can bring those communities back in a reasonable period of time, we have put in that investment and the training over the years so that can happen."

The 13-term member of Congress underscored the bipartisan nature of Monday's event in thanking members from the staff of U.S. Rep. French Hill, R-Ark., for attending the roundtable.

"We're in this together," Thompson said. "When bad people show up and want to do Americans harm, they don't ask what party we belong to or anything like that or what religion. They just want to hurt Americans. It's in times like this that partisanship doesn't matter. So I can say in times of need all the partisanship is out of the window. We're just Americans."