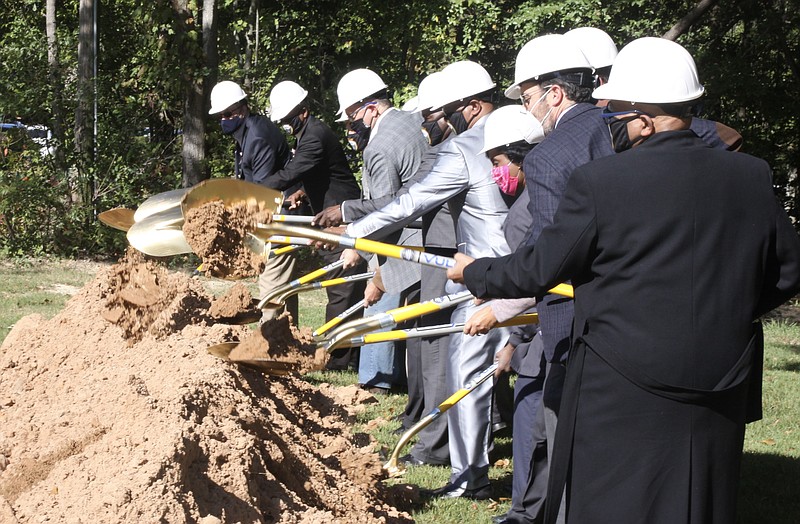 From one location to the next, County Judge Gerald Robinson and others turned the soil at the new locations of the buildings made possible by several investors and the P3 Group.

Robinson said that, when he realized the new buildings were needed, he didn't know how he was going to get them built. "I prayed about it, and I got an opportunity to meet with the guys at P3," said Robinson.

Through that encounter, Robinson learned about a private government partnership through which the county could lease buildings.

The ceremony began on the campus of the Jefferson Medical Clinic, the new home of the Jefferson County Health Unit. Robinson said that Dr. Josetta Wilkins, whom the building will be named after, did much for the community as a sponsor for the Arkansas Breast Cancer Act of 1997, which provided millions of dollars for education, diagnosis, treatment and research of breast cancer.

Jefferson Regional Medical Center President and CEO Brian Thomas said Robinson came to him over a year ago to talk about the need to replace the health unit.

"It's a true joy to us to be able to see and be a part in helping in some small way see the health unit come to a new location and get a new building," said Thomas. "I think it's going to be a great location for it."

One of the reasons two of the projects went forward was Simmons Bank, which donated $1 million to build the Jefferson County Health Unit and the Veterans Services Office.

"For more than 100 years, Simmons Bank has been committed to community," said Daniel Robinson, community president of Simmons Bank in Pine Bluff. "Donating this gift to support our veterans and our local health unit is investing in the future of Pine Bluff, our hometown, and our headquarters."

Saracen Casino was another partner, donating an undisclosed amount toward the new buildings. Carlton Saffa, a Saracen executive, said the health unit was at the forefront of the community's list of needs.

Delighted to be partner, Saffa said he was glad the needs of the community were being met.

P3 Group President and CEO Dee Brown described coming in with the job of making the vision of the community a reality.

"It's always about the community, and our job is to serve the communities that we enter into commitments with," said Brown. "The judge and the Quorum Court have been trailblazers to this regarding the first health unit delivered under public-private partnership in the state of Arkansas, and that commitment took 84 days under fruition to this groundbreaking."

The group then traveled to the new location of the Jefferson County Veterans Services Office in the 300 block of East Second Avenue. The building is being named after Sgt. Elga Lee Roberts, and Robinson became emotional as he spoke about his friend with whom he served in Desert Storm.

"We were good friends, and he lost his life on domestic soil once we returned from Desert Storm," said Robinson. "We made it all the way through Desert Storm, and he came home and had to be laid to rest."

Describing Roberts as a great person, a spiritual person, a soldier, and a servant to the community, Robinson said it was befitting to name the new building after his friend.

Pine Bluff Mayor Shirley Washington commended Robinson and spoke about the partnership between the city and the county. "All I can say when I think about it is how sweet it is when the county judge and the city mayor work together on one accord," said Washington.

Washington recounted the day Robinson went to her about the conditions of the current buildings and talking about the plans for new ones.

"This public-private partnership that P3 Group has come in and cemented with buildings is something that we can, as the judge says, we can't thank God enough for," said Washington. "One Pine Bluff, stronger together; one Pine Bluff, growing together. Make Pine Bluff, Jefferson County, southeast Arkansas the community it was destined to be, one that we can all be so proud of to call home."

Jefferson County Coroner Chad Kelley said the coroner's office moved into the current building in 1983, and the facility hasn't had any major repairs done since then.

"We've had water running in the office, [and] between the mortar and the brick is deteriorating," said Kelley. "It's always in the back of my mind, is something going to happen when we are in here with a family taking care of them?"

Kelley was pleased that a safe and secure environment would be available in the next 12 months for his staff, adding the state-of-the-art facility is a huge leap forward for Pine Bluff and Jefferson County.

Robinson gave thanks to God; to the Quorum Court for supporting his vision; to the donors and investors; to the county judge's office; and to his fiancee, Pine Bluff City Council Member Joni Alexander. But most importantly Robinson, thanked the community for entrusting him to serve Jefferson County.

"This all about service," said Robinson. "Service to the people. And that is what I want to do, serve the people." 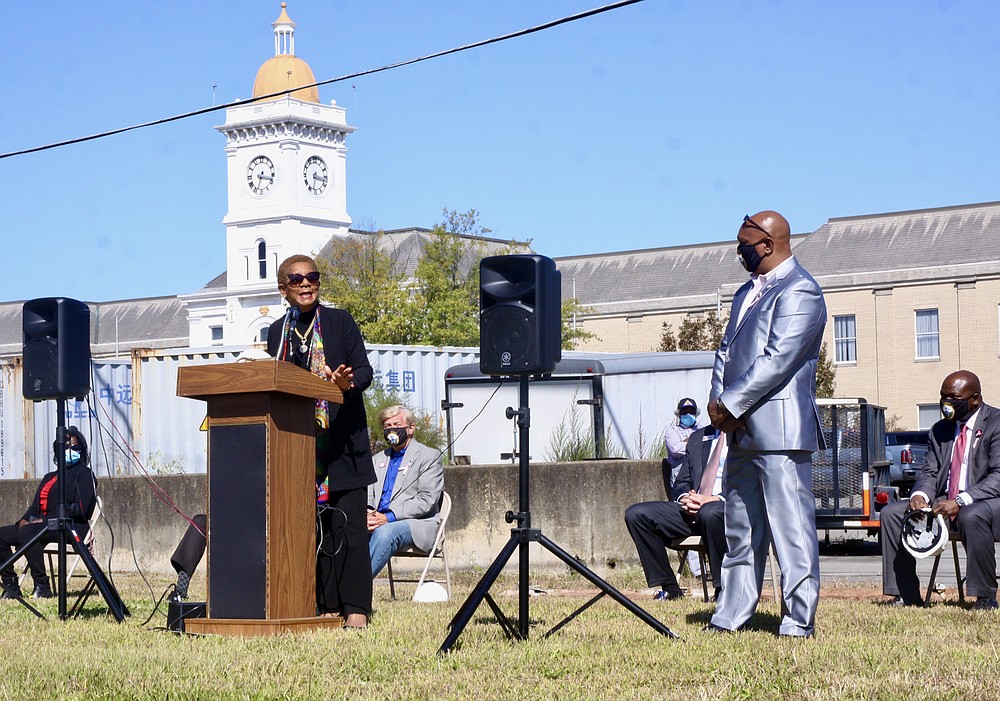 By Eplunus Colvin Pine Bluff Mayor Shirley Washington (left) speaks about the great relationship between the city and the county as an emotional Jefferson County Judge Gerald Robinson (right) looks on after announcing the name of the veteran's building after his good friend, the late SGT. Elga Lee Roberts, who he served in Desert Storm with.
ADVERTISEMENT