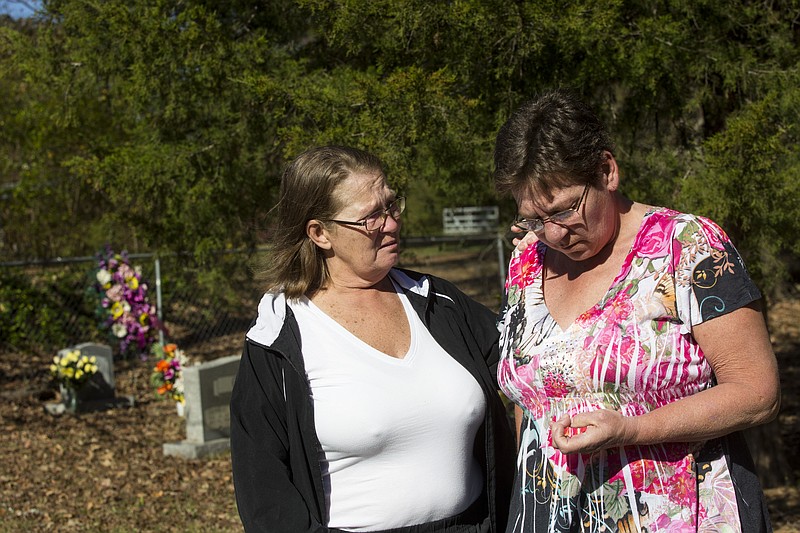 FILE — Rosie Perkins, left, comforts sister Rhonda Coppak while discussing the death of their mother Martha Crow Bull at her grave site in Perryville November 19, 2015. The family has been involved in a lawsuit after their mother's death in a Greenbrier Nursing Home was deemed negligent.

A lawsuit accusing nursing home owner Michael Morton and former lobbyist Gilbert Baker of corruptly interfering in a negligence lawsuit to cause former Circuit Judge Michael Maggio to reduce a $5.2 million jury award to $1 million in 2013 has been resolved, the plaintiffs' attorney confirmed Monday.

"All I can say is the case has been resolved," Little Rock attorney Thomas Buchanan said Monday about the Faulkner County Circuit Court suit that challenged the outcome of a negligence lawsuit filed by two daughters of Martha Bull, a Perryville woman who died in Morton's Greenbrier Nursing and Rehabilitation Center in April 2008.

In July 2013, Maggio, then a Faulkner County circuit judge, lowered the jury's award in the negligence case. Attorneys for Bull's family contended in the newer lawsuit, which was resolved within the past month, that Morton and Baker conspired to bribe Maggio to lower the award substantially.

Maggio pleaded guilty in January 2015 to a bribery charge, for which he is serving a 10-year sentence in federal prison. Baker, who is also a former state senator and former chairman of the Arkansas Republican Party, is facing a jury trial starting Feb. 22 on federal charges of conspiracy, bribery and wire fraud. Morton hasn't been charged, and he and Baker deny wrongdoing.

Electronic Faulkner County Circuit Court records on Monday didn't reflect that the corruption lawsuit, filed on Nov. 14, 2018, had been officially dismissed. Buchanan refused to comment on that Monday but noted that in general, any settlement of a lawsuit involving an estate must be approved by a probate judge.

The case was being presided over by Special Circuit Judge David Laser, who last year declined to dismiss the lawsuit, rejecting arguments from Everett and attorney Kirkman Dougherty that the plaintiffs couldn't cite "a single piece of admissible evidence that could establish that Morton ever spoke to or communicated with Maggio in any way."

Baker's attorneys said last year that he has "consistently maintained" that he never asked Maggio or Morton to do anything improper or illegal.

Two days before Maggio lowered the jury's award, Morton, a Fort Smith businessman, either wrote or had someone write 10 $3,000 checks on his behalf to 10 political action committees after Baker faxed him the PACs' names with specified amounts, according to Baker's federal indictment.

Maggio's campaign for the state Court of Appeals ultimately got several thousand dollars but not all of the PAC donations.

Morton has said he made campaign contributions to numerous candidates for the 2014 election, but never asked for anything in return from a candidate and never discussed reducing a jury award with anybody.