TELEVISION: Uncomfortable language in 'Boys' for good cause 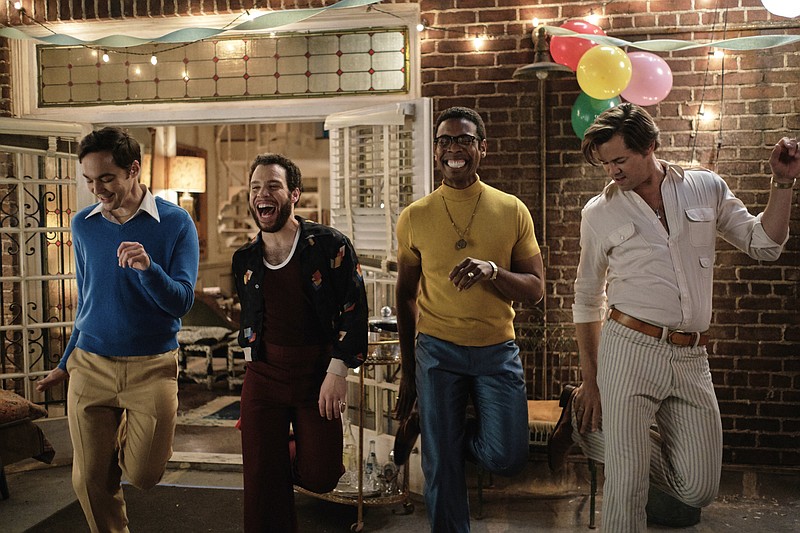 Jim Parsons (from left), Robin De Jesus, Michael Benjamin Washington and Andrew Rannells kick up their heels in a scene from remade “The Boys in the Band.” The new movie kept the original’s hurtful language. (Netflix via AP/Scott Everett White)

NEW YORK — Revisiting Mart Crowley's seminal 1968 play, "The Boys in the Band," in a new movie adaptation on Netflix privies viewers to the early struggles of the gay community and the offensive, hurtful language of the era.

While some of those gay and racial slurs were hard to speak, Jim Parsons and the cast believe it was necessary to use words now considered unspeakable to honor Crowley's dialogue, as well as make the audience feel the discomfort of the marginalization of the gay community at the time.

Crowley's story follows a group of men and takes place a year before the historic Stonewall riots in New York's Greenwich Village neighborhood that solidified the gay liberation movement.

Parsons, whose character, Michael uses a fair share of the racial, gay, and anti-Semitic slurs, admits he was uncomfortable.

"It's ugly. And none of those words were ever uttered by me without a severe amount of trepidation and a sick feeling in your stomach going into it," Parsons said.

Though uncomfortable, Parsons realized it was more important to embrace it than ignore.

"The sad part, I guess, is that because of what we're talking about, that's kind of the point. And you kind of have to go there to understand how a moment like that happens and where — why is this character willing to talk this way and see the hurt that it causes," Parsons said.

Director Joe Mantello, who also helmed the play, agrees that keeping the offensive language helps understand the story and plight of the characters.

"I do not believe the erasure of things that make us uncomfortable is progress," Mantello said.

The offensive language was not kept to cause pain, he said. Mantello believes there's a responsibility to reflect the original story and time period.

"My responsibility is to the story. And the story is: This the cost of oppression, it allows you to act in a way that is inhumane," Mantello said. "And I felt in order to be honest to that, that you're true to that, that it was essential that we keep it."

Matt Bomer, who plays Michael's friend, Donald, says he was very shocked during rehearsals when the words were said, but the weight of them hit once he took the stage.

"I heard a guttural gasp the first time one of these slurs was used that I remembered and realized how powerful they really are. And I think that was a good reminder always when doing it live. The audience kind of reminded us of how potent those words were and are," Bomer said.

As Bernard, the only Black member of the group, actor Michael Benjamin Washington believes the language, though painful, is necessary to be truthful and authentic.

"If you're setting a play in 1968 and you have a Black character and we're gonna pretend like he's not black, then you're not telling the truth. Just as if I wrote a play about 2020, but Black Lives Matter doesn't happen," Washington said.

Crowley's story depicts an unapologetic perspective of the lives of eight men, and the straight friend that unexpectedly shows up at a birthday party to help "normalize" the community.

The original play was a hit, and two years later became a critically acclaimed film. That same trajectory followed with a Tony-winning revival on Broadway.

Parsons says Crowley wrote a story that "resonates for all of humanity" because it can apply to anyone who has felt "othered and sidelined and distained in way shape or form."

"I think you don't need to be gay at all to identify and be moved by what you see," Parsons said.