Unexpected eyeful by PHOTOS BY MARCIA SCHNEDLER STORY BY JACK SCHNEDLER SPECIAL TO THE DEMOCRAT-GAZETTE | October 6, 2020 at 7:08 a.m. 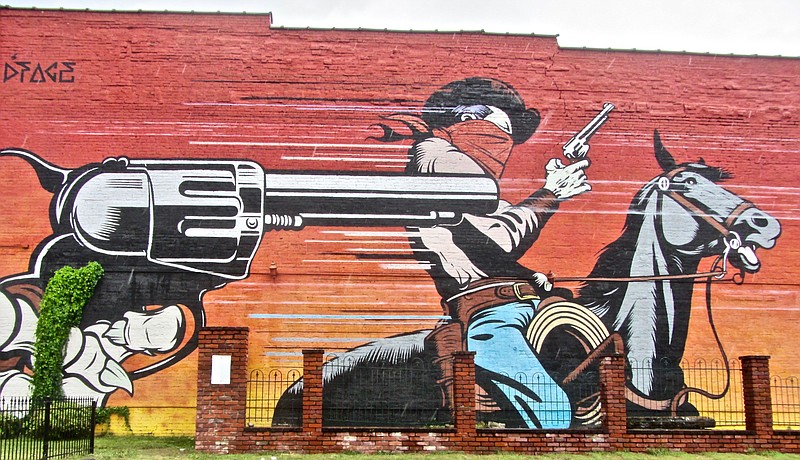 “Badlands,” by D-Face (Special to the Democrat-Gazette/Marcia Schnedler)

FORT SMITH — If the General Assembly ever decides to designate a Murals Capital of Arkansas, the odds-on favorite would be Fort Smith. The three dozen murals painted here since 2015 add up to a dazzling display of open-air creativity.

About half The Unexpected program's murals, some by artists with a wider reputation in this now fashionable outdoor-art genre, can be seen along or just off Garrison Avenue — the city's main downtown artery. The rest are scattered within handy driving distance.

Before the advent of its murals five years ago, Fort Smith was mainly known to pleasure travelers for its frontier-era Western lore related to Indian Territory (now Oklahoma) just to the west. Its best-known historical figure was the so-called "Hanging Judge," Isaac Parker. Its downtown verged on derelict, even if less so than in many of Arkansas' smaller communities.

Then, according to the popular travel site roadtrippers.com, "buildings empty for years suddenly blossomed into roadside rainbows" in the state's second-largest city.

That happened after businessman Steve Clark teamed up in 2014 with Claire Kolberg to create a project they named The Unexpected. They also established 64.6 Downtown. a nonprofit enterprise producing a yearly murals festival, suspended this year due to covid-19.

In the face of some local skepticism, The Unexpected's first nine murals were painted in 2005. They were followed by nine more in 2016, two in 2017, eight in 2018, and seven in 2019. More are planned for years ahead, if and when the pandemic has ended.

Echoing Fort Smith's frontier image, some of the murals relate to the mythology of those days. "Warpaint," by D-Face (a pseudonym, as is the case with other mural artists) depicts an American Indian woman set to fire an arrow from her bow. It rises above a small amusement enclave that houses a Ferris wheel.

A giant six-shooter dominates the "Badlands" mural, also by D-Face. The pistol is pointed toward a masked horseback rider. The "Catira," by Bicicleta San Freio, pictures a multicolored gathering of cowboys or vaqueros clearly having a good time.

[TAKE OUR QUIZ: Where would you find this Arkansas mural? » https://www.arkansasonline.com/muralsquiz/]

Animals are portrayed, sometimes realistically and sometimes surrealistically, in murals such as "Butterflies," by Mantra; angry-looking birds with sharp beaks in "Warbirds," by Ana Maria; a many-tentacled sea creature in Ana Maria's untitled work; and the gigantic above-ground "Mole," by ROA.

A local musical legend is the subject of "Alphonso Trent," painted by faculty and students at University of Arkansas at Fort Smith. The longtime bookstore Snooper's Barn anchors an image of a commercial block in "Native," by Add Fuel.

Many of the murals can be admired simply by driving up and down Garrison Avenue, as well as Towson Avenue and a few other streets