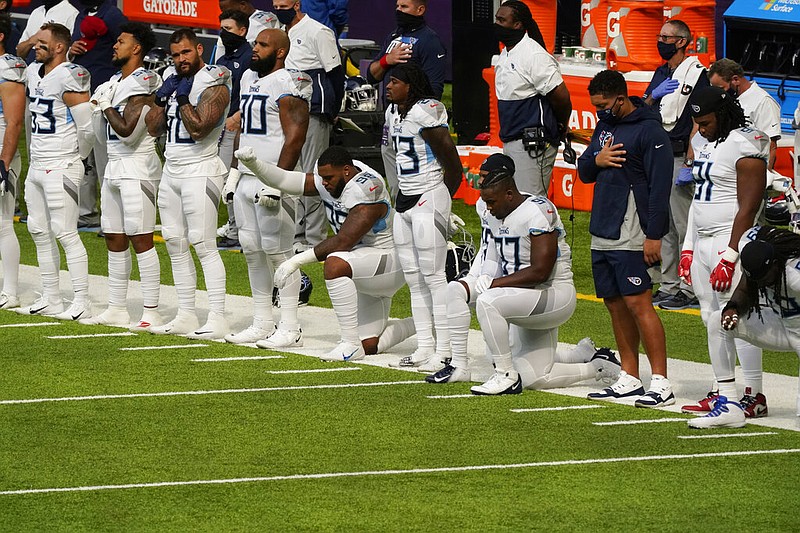 FILE - In this Sept. 27, 2020, file photo, members of the Tennessee Titans take part in the national anthem before an NFL football game against the Minnesota Vikings, in Minneapolis.

NASHVILLE, Tenn. — Tennessee will not be returning to the team's facility Wednesday after two more players tested positive amid the NFL's first covid-19 outbreak, and the New England Patriots have canceled practice amid reports that a third player has tested positive for the coronavirus.

Sports Illustrated reported that reigning NFL Defensive Player of the Year Stephon Gilmore tested positive for the virus on Wednesday and was added to the team's reserve/covid-19 list. The Patriots did not give a reason for Wednesday's cancellation and did not immediately respond when asked if it was related to a third positive test.

Quarterback Cam Newton tested positive Saturday and is on the reserve/covid-19 list, and the Patriots placed a defensive tackle from the practice squad on that list Tuesday. The Patriots are scheduled to host Denver on Sunday.

"WEAR YOUR MASK. KEEP YOUR DISTANCE," Newton posted on Twitter Wednesday along with a photo of himself wearing a mask.

Newton and the Titans make up the 11 confirmed positive tests among players, and the NFL said there were 15 new confirmed positives among personnel for last week in results announced Wednesday out of 37,002 tests given to 7,981 players and team personnel.

"We have said all along that we expect positive cases," said Dr. Allen Sills, the NFL's chief medical officer. "As long as the virus is endemic in our communities, we will see new cases among our teams. Risk mitigation, not elimination, is the key."

Both Sills and Dr. Thom Mayer, the NFL Players Association's medical director, said the key is everyone following the protocols.

"The virus is still very much a threat not only to our season, but to the safety of everyone in our community," Mayer said in a statement.

"We're fighting an uphill battle," McDermott said. "I think we know that there's a challenge because of how easily this thing spreads."

McDermott said the Bills have had no positives after beating the Raiders 30-23 in Las Vegas last week. The Raiders placed defensive tackle Maurice Hurst on the reserve/covid-19 list Tuesday.

The Titans had no positive tests Monday or Tuesday for the first time after six consecutive days of positive results. A third straight day was necessary for the team to be allowed back in its headquarters, stopping its planned return, according to a person familiar with the situation.

Instead, the Titans' outbreak now is up to 22 cases with 20 returned since Sept. 29, according to the person who spoke to the AP on condition of anonymity because neither the NFL nor the Titans announced the latest results. The Titans already have had their game with Pittsburgh rescheduled from Week 4 to Oct. 25.

The NFL gave New England and Kansas City an extra day after Newton tested positive Saturday, and the Chiefs beat the Patriots 26-10 on Monday night. But pushing the Bills' game with the Titans back by a day will be challenging because Buffalo is scheduled to host Kansas City on Thursday night, Oct. 15.

The league is attempting to play a full schedule amid the pandemic without teams isolated in a bubble as other sports have done to protect players and staff from the virus. No games were affected through the first three weeks of the season.

Pittsburgh defensive tackle Cam Heyward said Wednesday it was "ludicrous" to think the NFL wouldn't have positive tests and warned there would be more. He said players and teams were under pressure to minimize outbreaks.

"Things are going to change every minute now," said Heyward, the Steelers' player representative. "And we've just got to be willing to adjust. I know the NFL and the NFLPA is trying to do right by the players and the coaches, but there's only so much they can do."

NFL Commissioner Roger Goodell warned all 32 teams Monday that any violations of covid-19 protocols that force schedule changes could result in punishment including forfeiting games, fines or loss of draft picks.

The Titans need back-to-back days of negative test results to get back into their facility.

Tennessee hasn't been together as a team since Sept. 27, when the Titans beat the Vikings 31-30 in Minnesota. The Titans played that game after leaving outside linebackers coach Shane Bowen in Nashville following his positive test result Sept. 26, and the NFL shut down the team facility on Sept. 29.

The franchise has continued daily testing since then, and the league sent all 32 teams a memo Oct. 1 with list of new protocols for clubs to follow when dealing with a coronavirus outbreak or having been exposed to an outbreak.

Hurst didn't attend the charity function last week that led the NFL to fine 10 Raiders players for conduct violating covid-19 protocols. The list is for players who either test positive for the coronavirus or have had close contact with an infected person.