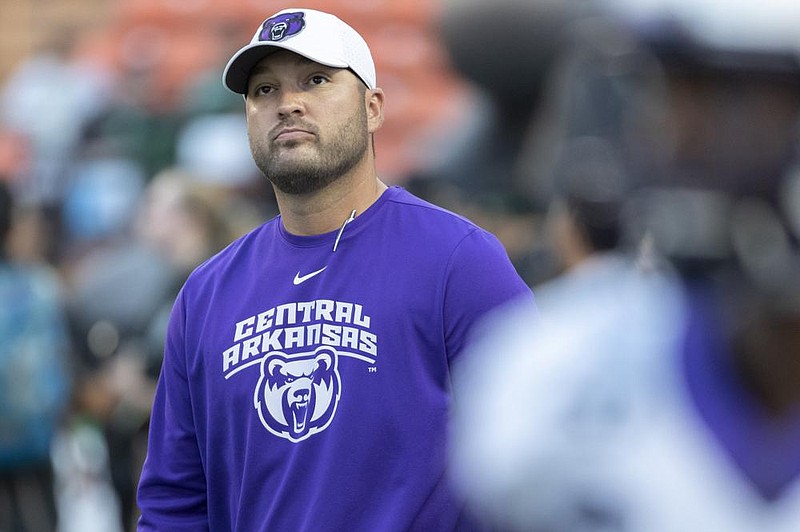 According to University of Central Arkansas football Coach Nathan Brown, there was nothing morally victorious about his team's 39-28 road loss to North Dakota State on Saturday.

But that's not to say the Bears didn't learn anything about themselves or weren't optimistic after battling the FCS' dominant program over the past decade.

UCA had gone just 7-12 against teams outside of the Southland Conference, dating back to 2014, prior to this season. Of those 12 losses, eight came against fellow FCS programs by an average of 10 points.

But none of those teams were the Bison.

"If you look at our performances, whether it's in the playoff or in big-time out-of-conference games over the last four or five years, we really haven't played very well," Brown said. "For the lack of a better term, we kind of laid eggs in big games in the playoffs.

"To go up to North Dakota in an atmosphere like the Fargodome, with all the success that North Dakota State has there, and to come away with really a four-quarter game and having the lead for 28 minutes of the football game says a lot.

"If that is the best team at the FCS level, which they are over the past 10 years, then we're not far behind. We're on the right track because our kids know they can play with the best. A loss is a loss, but there's a lot to build on coming out of a game like that."

Brown was visibly disappointed Saturday after the Bison erased a 28-25 fourth-quarter deficit by scoring the game's final 14 points to extend their FCS-record winning streak to 38 games.

Unlike the majority of the games during their run, the Bison were forced to sweat this one out.

UCA (2-2), which trailed by 12 early in the third quarter, had 297 yards of offense, 23 more than what North Dakota State yielded on average in 2019. The Bears' defense also forced seven punts -- the most the Bison have had since seven against California-Davis in Week 4 last season -- recorded three sacks and forced two turnovers.

Brown was pleased with the way his offensive line protected quarterback Breylin Smith, who threw for all three of his touchdowns after halftime, as well as the job his special teams did. He said he would've liked for the Bears to do a better job running the ball, which would have given them more play-calling options to keep drives alive whenever third downs surfaced. He also lamented the missed tackles they had on North Dakota State star quarterback Trey Lance.

Brown also was adamant that he wasn't surprised by the way his team handled everything North Dakota State threw at it, but he made sure to relay that no moral victories accompanied the performance.

"We didn't expect to go up there and lose," he said. "Going into a big football game with that mentality of just wanting to play it close, you'll never win. I told our guys that if we channel our frustration, we channel our learning moments that didn't happen to win the game in the right way ... then our program will progress even another step in the direction we need to go.

"Don't let a loss like that beat you two or three weeks in a row because you're still feeling the sting of it. That's going to be important for us moving forward because we've got tough opponents coming up."

The Bears began preparations for in-state rival Arkansas State University on Tuesday. The game originally was slated for Sept. 19 but had to be rescheduled by ASU for coronavirus reasons.

"We obviously have a head start on [ASU] after getting ready for them a couple of weeks ago," Brown said. "Then, having the game kind of pulled out from under us during the middle of the week ... we have familiarity with them. We had started the preparation process before.

"Obviously, we know a lot about them and their success over the last few years in the Sun Belt Conference. We have a tremendous respect for Coach [Blake] Anderson and the way he runs his program, so we know we've got a tough one on our hands."

Brown knows he'll need all hands on decks against the Red Wolves, who are coming off a 29-point loss at Coastal Carolina and will be playing at home for the first time this season. That means if the Bears have any lingering thoughts about the Bison, they need to be expunged.

"I think they've put [North Dakota State] past them and are ready to get going on ASU," Brown said. "Usually, players are quicker to turn the page than coaches. Kids are resilient and move on, that's just the way it is."