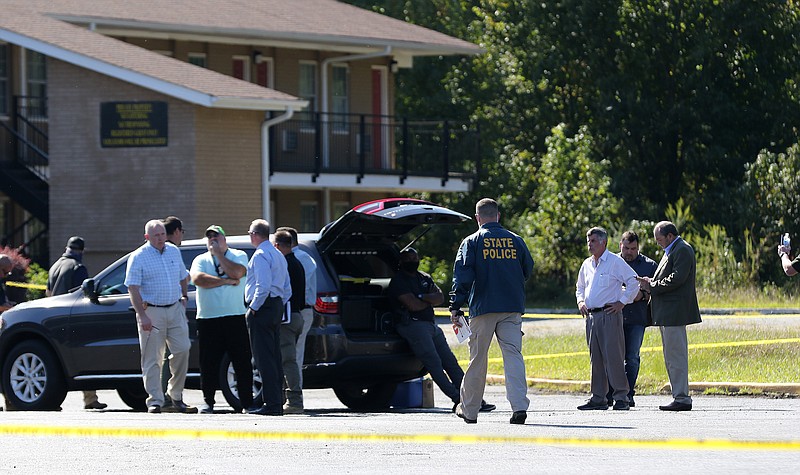 A man from Pine Bluff faces a capital-murder charge in Monday's fatal shooting of a police detective at an Econo Lodge in Pine Bluff, according to the county's prosecuting attorney.

Pine Bluff police detective Kevin Collins, 35, was killed and Lt. Ralph Isaac, 42, was wounded during the shootout at the motel. Collins was a member of the department's violent crime division. Isaac is a 20-year veteran of the department.

Authorities in Conyers, Ga., have been searching for Smith over the summer after a robbery and murder there in June. Police in Conyers, a suburb east of Atlanta, believed that Smith was in the Pine Bluff area.

A probable-cause hearing is scheduled for this morning before Judge Kim Bridgforth to determine whether there is sufficient evidence to hold Smith on the murder charge, Hunter said Tuesday.

Smith was booked into the Jefferson County jail Monday evening, according to the jail roster.

No one else has been arrested in the Pine Bluff shooting, according to Hunter. He said there was no additional information that he could provide as of Tuesday.

Isaac was released from the hospital Tuesday afternoon and is expected to fully recover, according to a Pine Bluff police spokesman.

A line of law enforcement vehicles escorted Collins' body from the Arkansas State Crime Laboratory back to Pine Bluff on Tuesday.

Collins had served with the department since 2015 and received the department's Officer of the Year award at an annual banquet in 2017.

Over the summer, police in Conyers, Ga., sought to arrest Smith on robbery and murder charges related to the June 15 shooting death of a 23-year-old man at an apartment building in that city.

Conyers and Pine Bluff authorities said they suspected that Smith had returned to Pine Bluff, where he was a resident, after the shooting in Georgia, the Democrat-Gazette reported in June.

At the time, Lt. Kim Lucas of the Conyers Police Department told the Democrat-Gazette that Smith was believed to be armed and dangerous, and Lt. David DeFoor of the Pine Bluff Police Department said vice and narcotics officers were working to find Smith.

When asked about the investigation in Conyers, Hunter said he had not been in contact with authorities in Georgia regarding Smith.

A statement Monday from the Arkansas State Police, which is leading the investigation, did not delve into why officers initially responded to the motel, other than to say that police were there in connection to an ongoing local criminal investigation.

According to the statement, Pine Bluff police were "met with gunfire" when they arrived at the motel shortly after noon.

Arkansas State Police spokesman Bill Sadler said Tuesday that the agency would not release additional information about the shooting that day.

In response to questions about the investigation, DeFoor said via email Tuesday that Pine Bluff police had made no arrests in the shooting.

Arkansas State Police took over the investigation immediately after the shooting, according to DeFoor. He said the Police Department created an incident report related to the shooting.