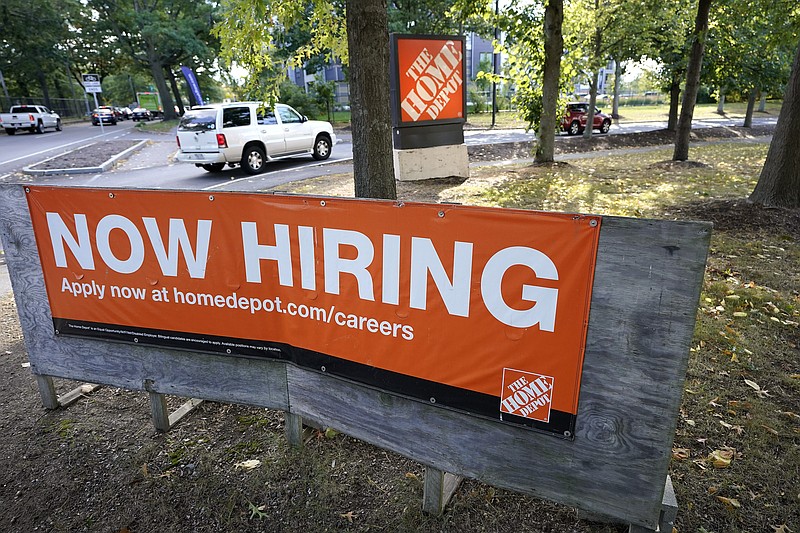 Vehicles drive past a now hiring sign as they enter a parking lot for a Home Depot store location, Wednesday, Sept. 30, 2020, in Boston. The number of Americans seeking unemployment benefits declined last week to a still-high 837,000, evidence that the economy is struggling to sustain a tentative recovery that began this summer. (AP Photo/Steven Senne)

The service sector, buoyed by a summertime boost in consumer spending on some recreational pursuits, led the way in job gains in September, though the overall growth rate has cooled some, according to an analysis of an "Employment Situation" report released Friday by the Bureau of Labor Statistics.

September saw 661,000 total nonfarm payroll jobs added. However, September's job growth was the slowest since the recovery began in May, with less than half of August's employment gain of 1.489 million jobs, according to a Monday news release from the University of Arkansas System Division of Agriculture.

"To be fair, the slowing pace of job recovery was expected: the massive spike in re-employment associated with widespread state re-openings has largely passed," economist John Anderson said. "The economy is now back to the mode of trying to manage more incremental growth as consumer behavior slowly inches back toward normal."

Anderson is head of the agricultural economics and agribusiness department for the UA System Division of Agriculture and the Dale Bumpers College of Agricultural Food and Life Sciences. He has been providing pandemic-related analyses of the economy since March.

His analysis of September's Employment Situation report is available at https://bit.ly/3nbo3vz.

"Since May, the economy has added back 11.4 million jobs against the 22.2 million that were lost in March and April," he said. "The unemployment rate in September clocked in at 7.9 percent, edging down from August's 8.4 percent."

Anderson said the largest gains were not surprisingly in the service-providing sector, reflecting the ongoing recovery in food service and travel- and leisure-related industries.

Total gains in the service-providing category amounted to 784,000 jobs. This compares with gains of 93,000 jobs in the goods-producing sector.

"The labor market has only recovered about half of covid-related losses," Anderson said. "As with the unemployment rate, further gains will be harder to come by as the pace of covid recovery slows. This will likely be the case until consumers regain the confidence to fully resume their normal, pre-covid patterns of behavior."

Other virus-related economic analyses are available at https://bit.ly/AR-Ag-Eco-Impacts2020.