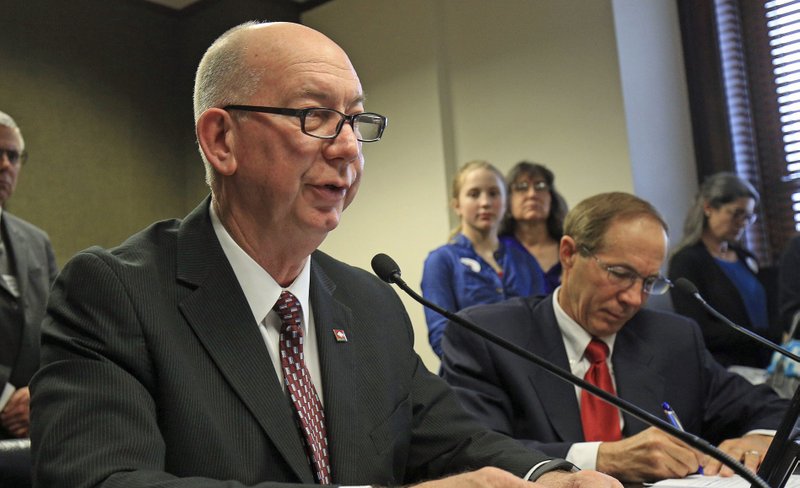 In a voice vote with no audible dissenters, the legislative panels made this recommendation in their biennial adequacy review to Republican Gov. Asa Hutchinson and the Republican-dominated Legislature.

The review began under 2003 legislation passed in the wake of the Arkansas Supreme Court's Lake View School District vs. Huckabee decision that found the state's education funding system was inadequate and unconstitutional.

In fiscal 2021, the public school fund is to receive $2.2 billion in state general tax revenue based on the latest revenue forecast. Information about total state funding -- including federal money -- for public schools in fiscal 2021 was unavailable through the Bureau of Legislative Research on Tuesday afternoon.

Afterward, Richard Abernathy, executive director of the Arkansas Association of Educational Administrators, said, "I am ecstatic" with the committees' recommendation.

"This is the most money that school districts have received in years and coming at a time when schools are really struggling, and I'm very, very pleased with the recommendation that has come out," he said.

However, the recommendation must first be approved by the Legislature and governor.

Department of Education Secretary Johnny Key, said in an interview that the committees' recommendations "are very comprehensive from a standpoint of just a financial boost to schools.

"I'm still a little confused about some of the categorical [funding] changes, but continuing to talk with the chairs and understand ... where they are headed with some of the changes," he said.

"A lot of different things went into some of the numbers we put in here," Cozart said.

Rep. Brian Evans, R-Cabot, said, "I believe that collectively, as input has been received by several of those in this room, that there have been exceptional strides in many areas, not all areas.

"There are areas on this that I personally would like to see much more funding ... things that would affect my district," he said before making a motion for the committees to approve the proposed recommendations.

"However, after months of meeting with this committee, I think we are at a point where ... we must continue to make steps," Evans said.

But Sen. Joyce Elliott, D-Little Rock, said, "My big objection is the fact we got brand-new numbers today, and we are supposed to just say, 'OK, that's it.'

"I know it is not going to be perfect, but we always get ourselves to a point where we get to the bottom line," and lawmakers rush to make recommendations, Elliott said.

Under the committees' recommendation, school districts also would get $8 million more each fiscal year to help cover the cost of their increased contributions to the Arkansas Teacher Retirement System.

The combination of the foundation funding increase and the adjustment for increased retirement contributions would be 2.3% increases each year.

That teacher pay funding boost would be in addition to the Education Department's plan to distribute $60 million over four years to help districts cover the cost of raising their starting teachers' salaries to the minimum.

Rep. Mark Lowery, R-Maumelle, made a motion for the committees to approve the proposed recommendations of the chairmen for the overall funding increase, but after removing the proposed $15 million a year. His motion died for lack of a second.

The Education Department has about $35 million left over from the original $60 million. School districts were notified of their allocated amount at the beginning of the four-year period and given the option of receiving funding over a period ranging from one to four years, said department spokeswoman Alisha Lewis.

"So the funds remaining are already allocated, just waiting to be distributed based on the district's preferred timeline," Lewis said after the committees' meeting.

Cozart, the House committee chairman, told lawmakers that the $15 million a year "is to help the schools that are going to be on the cliff when the $60 million goes away.

Cozart said the enhanced salary funding proposal was developed by a committee of school district superintendents that Abernathy formed.

"It goes directly to the teachers," he said.

Lowery said Cozart "asked Richard Abernathy to put together a group to come up with some kind of solution [and] that charge was not given to any of us.

"This is the first time we have heard of that solution," he said.

But Cozart said he wasn't prepared to present the proposal before Tuesday.

Lowery said, "That's my frustration is we get to this at the eleventh hour.

"We have this constitutional deadline, and we are not involved in those working group discussions, so that some of us could have come back with a counterproposal," he said.

"I have heard but from a very few, so this is what we've come up with, a very few," he said.

"As you know, it is going to take a lot of work to pull teacher salaries out of there and make that formula work," Cozart said.

Regarding the $15 million proposal, Abernathy told lawmakers, "When you raise the minimum teacher salary schedule, it has a bigger impact on small schools than it does the larger schools because typically your larger schools already are above that.

"This [proposal] in my opinion goes directly at the heart of [the Lake View ruling], that we are trying to help the smaller school pay their teacher salaries, but still have enough money to implement academic programs, etc., for the kids, so I think you have a bigger problem if the small schools are not able to pay the salaries," he said.

• Enhanced student achievement funding from $1,576 per student in fiscal 2021 to $1,594 and $1,612 the next two years, for districts in which more than 90% qualify for free and reduced-price lunches under the National School Lunch Act.

Rep. Jim Dotson, R-Bentonville, asked what "are we going to do about the ongoing [personal protective equipment] expenses" for school districts. The equipment would be used during the coronavirus pandemic.

Cozart said federal coronavirus relief funds have been tapped to purchase as much personal protective equipment as possible.

"That is going to be an ongoing thing," he said. "There are a lot of things we talked about that are going to be ongoing, and up and coming that are not in this [foundation funding] matrix. ... That is something that we might come have come back and revisit."