Clean and skin your game 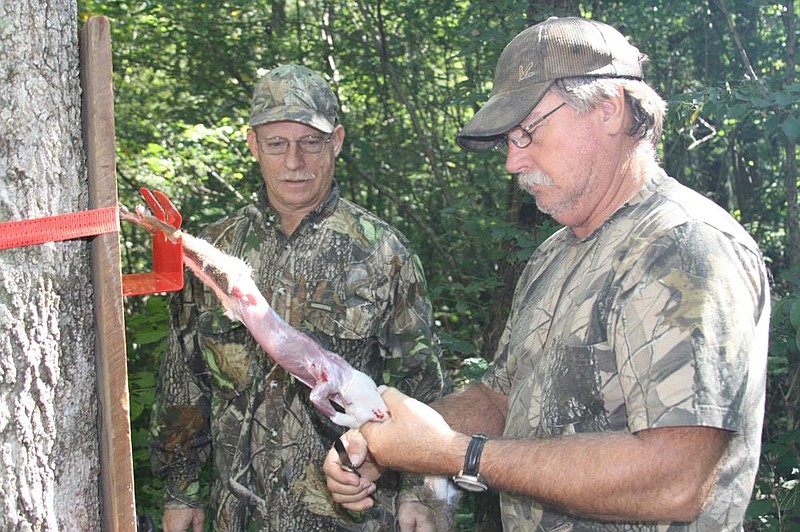 Cleaning and processing game is the most unpleasant aspect of hunting, but it's a necessary chore.

It is dirty, smelly, bloody work, and it can be quite shocking when you do it for the first time. Different game requires slightly different methods, but the basics are the same. Clean it, skin it and butcher it.

Skinning a squirrel is easy. With a sharp knife, make a single cut under the base of the tail and then continue cutting a few inches toward the head between the skin and the muscle tissue. Hold the tail to the ground with your foot, hold the back legs solidly and pull the skin toward the head. The entire hide will come off like a jacket. It is a little easier if you cut off the front feet with shears.

Next, make a long cut from the throat down the belly to the vent. Cut through the pelvic muscles to separate the hips. Pull open the body and remove the innards. Wash the interior and put the squirrel on ice.

Prepping ducks, geese and upland birds depends on how you intend to cook them. Hunters who roast or bake their birds usually leave the skin intact, which means you'll have to pluck the feathers. It's a messy hassle, so many hunters take their ducks to a picker.

Many hunters only eat the breasts and thighs, which does not require removing the innards. To remove the breasts, pull out a few breast feathers at the top of the collarbones to expose skin. Make a small cut with your knife and pull the skin apart to the lower end of the breasts. Cut the breasts along the breastbones until they pull free. Make sure you remove the "tenders," the long, small muscle groups that accompany the breasts, as well.

If you leave the skin, make a cross cut across the vent and pull open the body. Reach into the body cavity, grab the organs and pull them out. Rinse the inside and put the bird on ice or into a refrigerator.

The easiest way to clean a deer is to hang it by the back legs, but it's also fairly easy to do with the deer lying on the ground.

Pull a tuft of chest hair aside to expose bare skin and make a shallow vertical cut to the sternum. Continue to open the chest and torso all the way to the pelvic area. It's much easier to do this with a knife that has a gut hook on the top because it prevents cutting into body cavity and nicking an intestine. The intestines are under a lot of pressure and bulge against the belly, making them easy to nick or pierce. Nicking an intestine will release waste into the body cavity and taint meat.

With the deer hanging from the hind legs, make a long cut from each ankle down the entire length of each leg, following the hamstrings. Do not cut the tendons. Cut across the rump from both legs to complete an unbroken V-shaped cut that stretches from rear ankle to rear ankle. Cut the skin away from the legs and pull the skin all the way to the head. As you pull the skin away from the shoulders, you can remove the shoulders with a couple of easy cuts and a twist. Cutting off the legs at the knees makes this easier.

This will preserve the cape if you intend to mount your deer's head.

Reach inside the deer and gently cut out the tenderloins. They are along the bottom of the spine.

There are several ways to remove hams. I generally make a circular cut above the knees and then cut off a ham in two big chunks. It is very easy to do.

If the shoulders are not damaged or blood shot, remove them from the bone in the same fashion.

If you want to eat the heart or liver, clean them thoroughly and refrigerate them quickly.

Dispose of the carcass properly, and you're done. 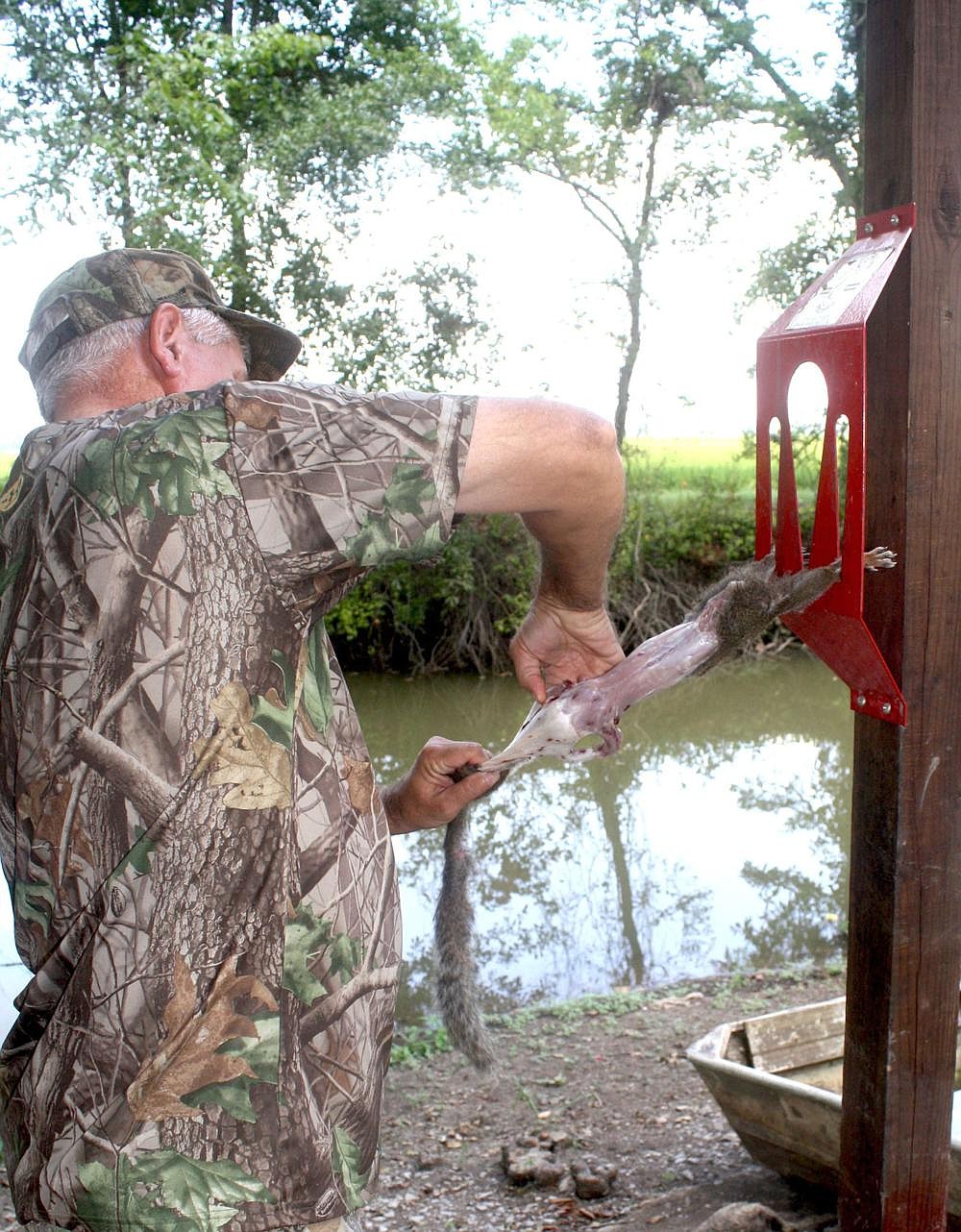 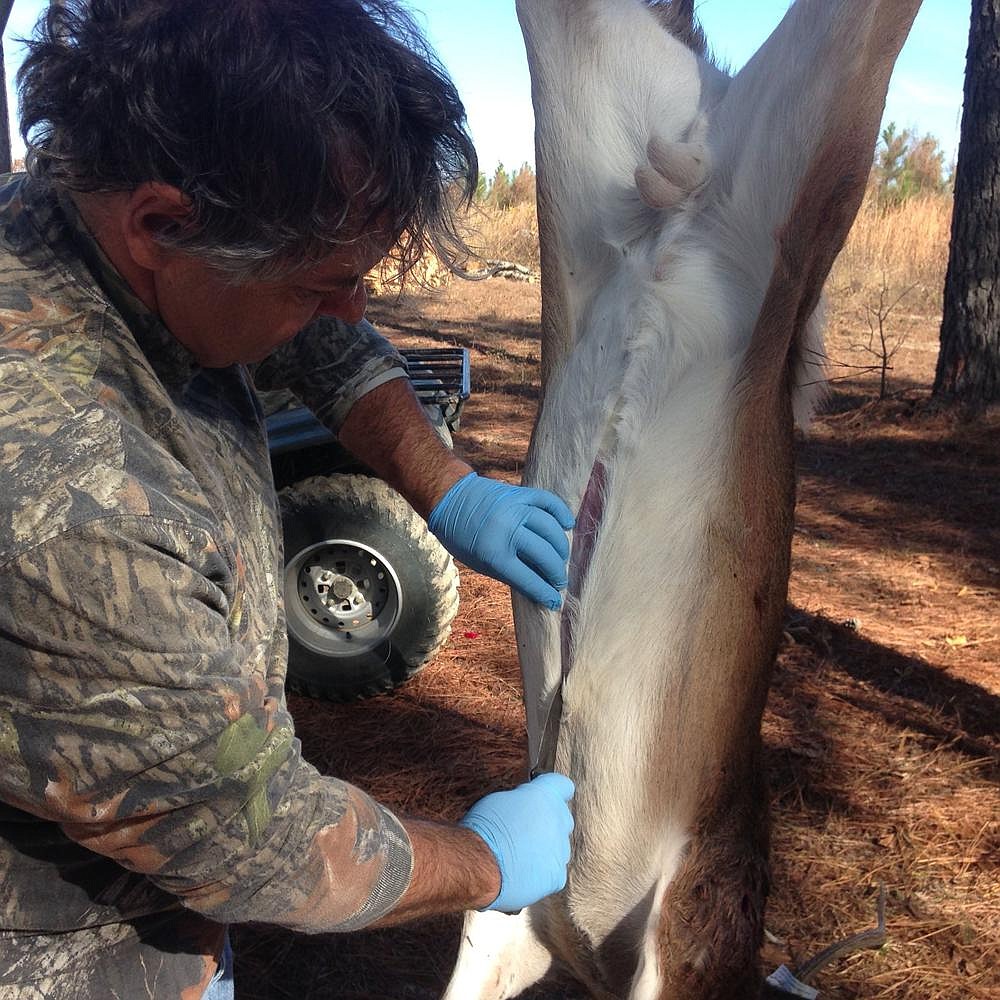 Field dressing and skinning is when the real work of deer hunting begins. Rubber gloves makes the job a little tidier and reduces the chance of pathogen transmission. (Arkansas Democrat-Gazette/Bryan Hendricks)
ADVERTISEMENT