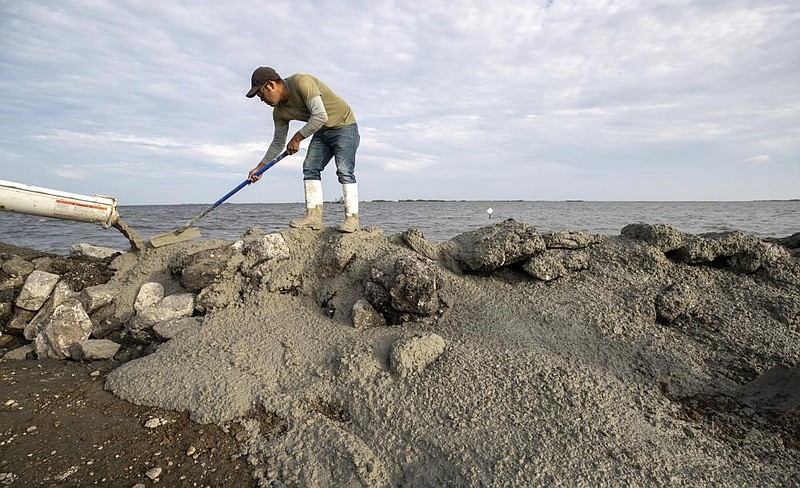 Raul Estrada, an employee of Terrebonne Parish in south Louisiana, stabilizes a coastal rock wall with cement Wednesday near Isle de Jean Charles, La. Hurricane Delta is expected to make landfall south of Morgan City, La., on Friday. Because of the forecast, the SEC moved Saturday’s game between LSU and Missouri from Baton Rouge to Columbia. Mo. (AP/The Advocate/David Grunfeld)

Another game involving LSU is being moved to a different location because of weather concerns.

The SEC announced Wednesday that No. 17 LSU's game against Missouri that had been scheduled to be played in Baton Rouge on Saturday night is being moved to Columbia, Mo., because of Hurricane Delta.

"We're going to travel and won't blink," LSU Coach Ed Orgeron said. "Hopefully we can get ourselves a big road win."

Wednesday's news came five years ago to the day that the SEC announced LSU's scheduled game at South Carolina was being moved to Baton Rouge because of heavy flooding.

The Tigers beat the Gamecocks 45-24 in their 2015 game with proceeds going to flood victims in South Carolina.

"Due to the pending impact of Hurricane Delta on Louisiana and the surrounding area, it is in the best interest for the safety of everyone involved to move the game to Columbia," SEC Commissioner Greg Sankey said in a statement Wednesday. "It was critical to relocate the game to an SEC campus where SEC covid-19 management protocols are in place and readily applied."

It will be the first time LSU has played at Missouri.

"It's 2020 and nothing is predictable," Missouri Coach Eliah Drinkwitz said. "But we're excited to play this week. I think any opportunity to play college football this season in this environment is awesome.

"But along with that, our thoughts and prayers are with everyone along the Gulf Coast as they prepare for this upcoming storm. I know it's a challenging time for those in the path and I just wish them the best as they're preparing for what lies ahead."

Drinkwitz said it's nice to be playing at home, but that the move is about the well-being of both teams.

"This is going to be an extremely safe place for the players and everybody that's traveling to Columbia from LSU," he said.

As of Wednesday, the LSU-Missouri game was the only SEC matchup affected by Hurricane Delta, but Ole Miss Coach Lane Kiffin said the Rebels' game against No. 2 Alabama -- scheduled for a 5 p.m. start at Vaught-Hemingway Stadium on Saturday -- could move to a different day.

"I don't think we'll know until [today] for sure. I think [SEC officials are] kind of holding off with the most accurate weather we can get. Nothing has changed so far."

If the game needs to be rescheduled, both teams have an open date Nov. 7.

"It's out of our control," Kiffin said.

A week after Georgia opened the season by beating the University of Arkansas, Bulldogs Coach Kirby Smart was glad to congratulate his buddy, Razorbacks Coach Sam Pittman, on a victory at Mississippi State.

The Razorbacks broke their SEC losing streak at 20 games in Pittman's second game as their head coach. He was Georgia's offensive line coach the previous four seasons.

"I was extremely happy for Sam," said Smart, who called Pittman. "He does a tremendous job. I watched his locker room piece after the game. That was vintage Sam. Charismatic. Just genuine."

In a video posted on Twitter of Arkansas' locker room celebration after beating Mississippi State 21-14, Pittman is heard telling his players, "Turn that damn jukebox on!"

Of course, Mississippi State's visiting locker room doesn't have a jukebox, but Pittman has one at home.

"It doesn't surprise me," Smart said with a laugh of Pittman's word choice. "He's known for his jukebox comments. He had an old jukebox in his basement here that he would play every now and then. So he probably thinks of a jukebox when it comes to music."

Pittman said he has a Rock-Ola 75 model jukebox that was in the basement of his home in Athens, Ga., but that he doesn't have it set up in his Fayetteville house yet.

"It's out in the garage now," Pittman said. "I don't have a basement."

Pittman said the jukebox has "some really nice songs on it" and plays old 45 records.

"I've got enough room in [the house] to roll her in there eventually," Pittman said. "Probably some time after the season."

Pittman has gotten some good-natured ribbing about his jukebox comment.

"I know there wasn't no jukebox over there at Mississippi State," he said. "I was just excited."

Georgia beat Arkansas 37-10, but the Razorbacks led 10-5 in the third quarter.

"I'm happy for Sam. I think he's put a tremendous staff together that does a great job," Smart said. "They've got those kids believing in what they're doing.

"I think they probably gained a lot confidence from our game, because they played really well, especially in the first half."

A major reason why Arkansas' game plan of using three defensive lineman and dropping eight into coverage worked well at Mississippi State was because of the dominating play of senior nose guard Jonathan Marshall.

Sophomore Zach Williams and freshman Eric Gregory made their first starts at the end spots and played well, but Marshall's experience and strength inside was critical for the Razorbacks.

"I thought that their three held up against our five [offensive linemen] all day," Mississippi State Coach Mike Leach said. "And [Marshall] would flat out whip two guys off and on."

Assuming Hurricane Delta doesn't intervene, this weekend is Lane Kiffin's turn to see if he can be the first of Nick Saban's former assistants to beat the coach who has won six national championships.

Saban improved to 20-0 against head coaches who previously worked for him at Michigan State, LSU and Alabama when the Crimson Tide beat Texas A&M and Jimbo Fisher 52-24 last week. Fisher is now 0-4 against Saban.

Kiffin, in his first season at Ole Miss, will face Saban and Alabama for the second time as a head coach, but first time since being his offensive coordinator from 2014-16.

"No offense to Clemson, those are the two premier programs that are operating at the highest level over the last, whatever, 10 years. And [Alabama is] doing it in the SEC, so it's a little bit harder."

Kiffin said the idea that it's a positive for him to play Saban because he knows his program so well doesn't add up when you look at the scoreboard.

"All these people say it's an advantage because I worked with him. I don't really understand that, because he's 20-0 against coaches that worked for him," Kiffin said. "So if working for him gives you an advantage, you're not a very good gambler then because 20-0 is a pretty strong record."

Tennessee has improved its offensive line considerably since Jeremy Pruitt's first season as coach in 2017.

"Our first spring here I think we had seven or eight scholarship offensive linemen, and only two of them weighed over 300 pounds," Pruitt said. "So we needed more bodies, and we needed to grow some of the bodies that were here.

"We've been able to do that over a couple of recruiting classes, and good offseason strength and conditioning."

Going into an early-season SEC East showdown at Georgia on Saturday, Tennessee is loaded with five-star offensive linemen including Cade Mays, a transfer who played for the Bulldogs; Trey Smith and Wanya Morris; and four-star recruits Brandon Kennedy, a transfer from Alabama, and Darnell Wright.

A tight end probably is never going to win the Heisman Trophy, but Florida junior Kyle Pitts has made a big name for himself to start this season.

Pitts had 12 catches for 227 yards in the Gators' victories over Ole Miss and South Carolina, but what really grabs attention are his 6 touchdown receptions. He had 8 catches for 170 yards and 4 touchdowns against the Rebels. Those are a season's worth of numbers for some tight ends.

At 6-6 and 240 pounds, Pitts is a big target for quarterback Kyle Trask, and he also has the speed and hands of a wide receiver.

"We know he's a mismatch out there on the field," Gators Coach Dan Mullen said.

Pitts said he tries not to get caught up in the big numbers.

"I try my best not to pay attention to those types of things," Pitts said. "Because sometimes that will affect some players' performances."

4(8);Tennessee;2-0;Vols will test themselves against Georgia

9(5);Mississippi State;1-1;Leach going back to Kentucky

It's early in the season, but Trask's hot start has him high on most Heisman Trophy lists. He has a 71.8% completion rate (51 of 71) for 684 yards and 10 touchdowns with 1 interception in victories over Ole Miss and South Carolina.

RANKINGS Georgia is No. 3 in the AP and tied for No. 3 with Florida in the USA Today coaches poll. Tennessee is No. 14 in the AP poll and No. 12 in the coaches poll.

Tennessee's eight-game winning streak is the longest in the nation by a Power 5 conference team, but the Vols will need to pull an upset at Georgia to keep it going. Tennessee's last loss was to No. 1 Alabama, 35-13, on Oct. 19.

None of Tennessee's victories in the streak came against a nationally ranked opponent, and Georgia is coming off an impressive 27-6 victory over Auburn.

Arkansas at No. 13 Auburn

No. 2 Alabama at Ole Miss

58.0 -- Rushing yards per game allowed by Georgia to rank third nationally behind North Carolina (54.0) and Pittsburgh (57.5)

– Georgia Coach Kirby Smart on Stetson Bennett becoming the team's starting quarterback after he seemed to be far down the depth chart.

– LSU Coach Ed Orgeron on the Tigers' 41-7 victory at Vanderbilt after they opened with a 44-34 loss at home to Mississippi State. 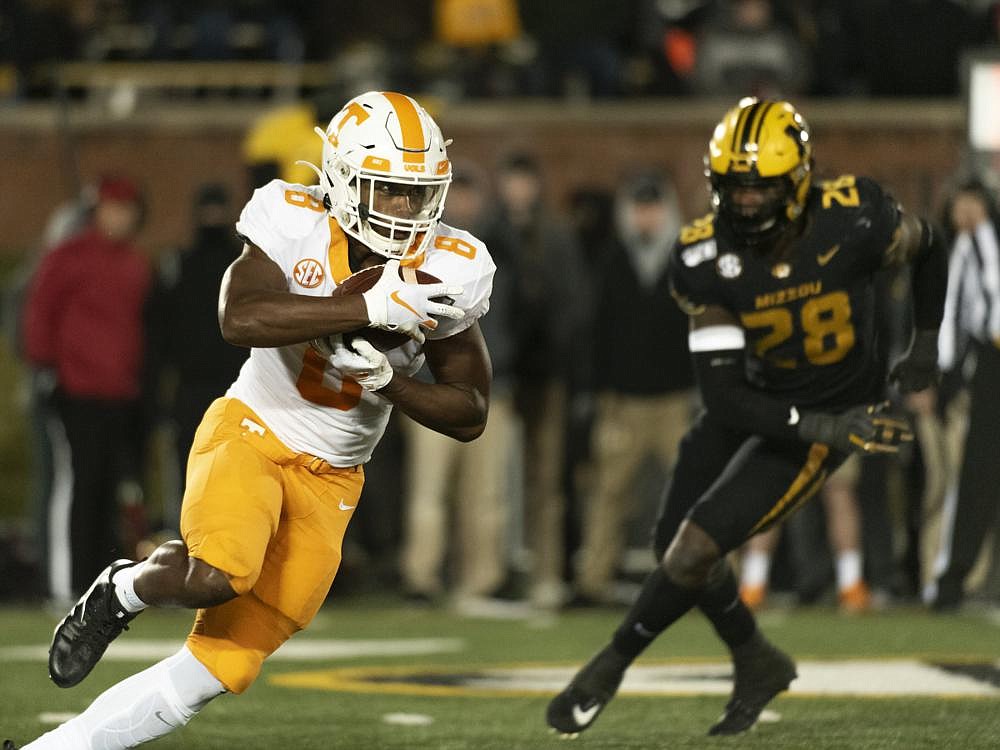 Tennessee running back Ty Chandler (left) has rushed for 176 yards, an average of 5.5 yards per carry, and leads the SEC with 88.0 yards per game. (AP file photo) 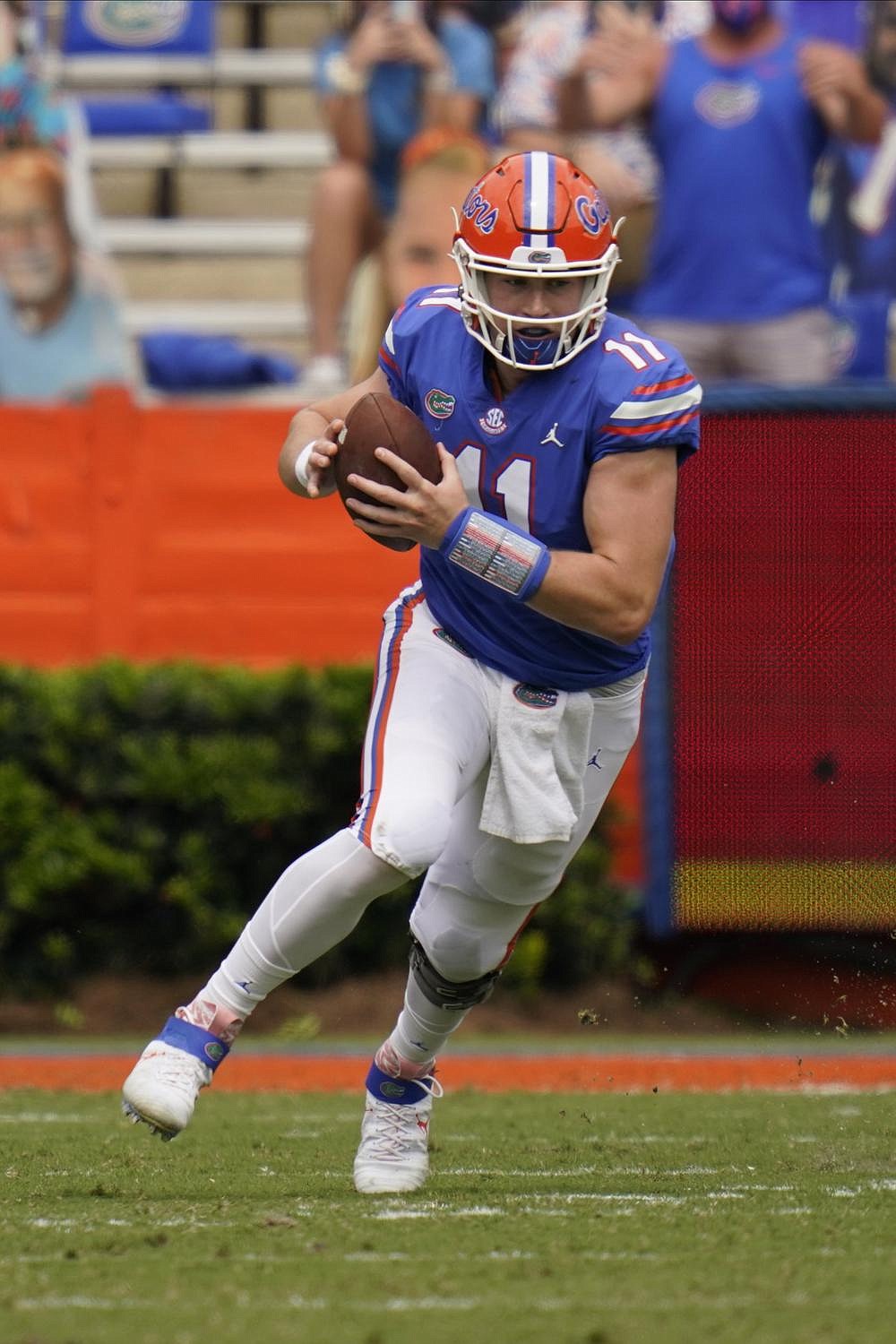 It’s early in the season, but Kyle Trask’s hot start has him high on most Heisman Trophy lists. He has a 71.8% completion rate (51 of 71) for 684 yards and 10 touchdowns with 1 interception in victories over Ole Miss and South Carolina. (AP/John Raoux)
ADVERTISEMENT