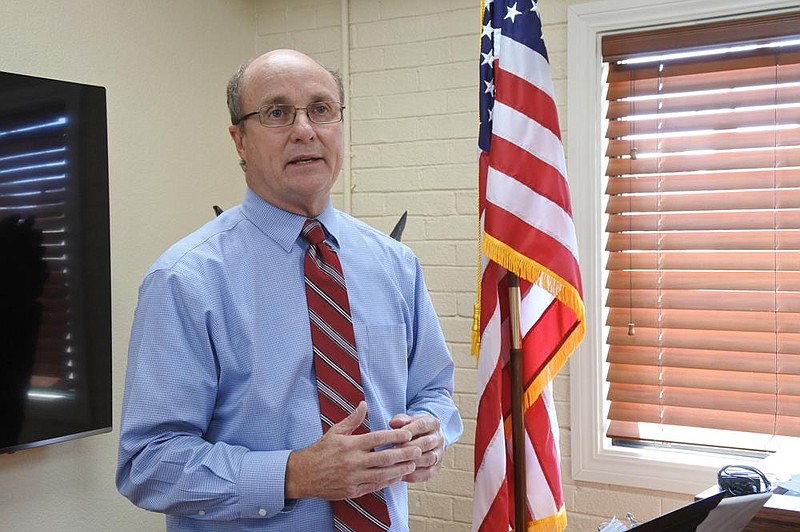 Fort Smith attorney Joey McCutchen speaks during a news conference Tuesday to announce the creation of Citizens Against Unfair Taxes. The group opposes the proposed 10-year extension of a 0.25% Sebastian County sales tax that will be on the ballot of a special election in the county on Nov. 3. (Arkansas Democrat-Gazette/Thomas Saccente)

Fort Smith attorney Joey McCutchen announced the creation of Citizens Against Unfair Taxes during a news conference Tuesday. The group opposes the proposed 10-year extension of a 0.25% Sebastian County sales tax that will be on the ballot in a special election on Nov. 3.

Arkansas Act 1087 of 2013 gave UAFS the authority to request a sales-tax extension, with the Sebastian County Quorum Court approving an ordinance calling the special election on May 26. It states that before the sales tax, between 1965 and 2001, county voters supported UAFS, and its predecessor Westark College, through property taxes.

McCutchen said the Citizens Against Unfair Taxes believes that Sebastian County voters need to be educated on this issue, as well as that if they are educated, the sales tax will "go down."

"Also, I want to say that everyone of our group supports UAFS," McCutchen said. "We feel strongly about UAFS, but we've paid our fair share over the last 19 years ... and we'll continue to pay our fair share, but this tax needs to get off of the backs of Sebastian County voters."

The tax, McCutchen said, was sold to voters in 2001 as a temporary, tax for the transition and growth of Westark College to a university. In large part because of its tax dollars and community support, the county now has a university that offers four-year degrees. The university has awarded more than 6,900 bachelor's degrees over the past 10 years.

According to McCutchen, this sales tax, through which UAFS has collected more than $70 million from county residents since 2001, was not meant to be permanent.

"And if the voters extend this tax for another 10 years, it, in effect, becomes a permanent tax, one that never gets off the books," McCutchen said.

McCutchen argued that while the extension that's on the ballot is only for 10 years, the university will be back in eight years asking residents to extend the tax for another decade, and this same conversation will take place again.

"That's why it's time for the people to say 'no,' that there's plenty of revenue to support our university, and since we don't have local control, it's a question for the [University of Arkansas] board of trustees to answer, how they want to fund our excellent University of Arkansas because, hey, the people are going to be paying taxes to support it one way or another," McCutchen said.

Sebastian County voters were asked to dissolve the Sebastian County Community College District, repeal the 5.2-mill property tax for the college and replace the millage with a 0.25%-cent sales tax, a previous Arkansas Democrat-Gazette article states. A sample ballot provided by the Sebastian County clerk's office states that the tax would remain in effect for 20 years unless residents vote to retain it.

Another point McCutchen argued was that Fort Smith and Sebastian County are "taxed to death," with the sales tax being only the tip of the iceberg in Fort Smith.

This tax is part of the 1.25% county sales tax, which is included in Fort Smith's current tax rate, according to the city's finance department. This leads to a total tax of 9.75% when the 6.5% Arkansas and 2% city sales taxes are taken into account.

McCutchen also discussed additional costs facing Fort Smith residents. City officials signed a consent decree in 2015 with the U.S. Environmental Protection Agency, the Department of Justice and the state. The city agreed to make an estimated $480 million in repairs and upgrades to its wastewater system over the 12 years to clear up chronic violations of the federal Clean Water Act, and to aid in fulfilling these requirements, it raised its sewer rates by 167% from 2015-17.

In May 2018, residents of Fort Smith and Barling approved a millage increase to fund projects in the Fort Smith School District. The increase, which moved the school district property tax rate by 5.558 mills from 36.5 to 42.058, will generate about $120 million. It was the first millage increase in Fort Smith since 1987.

Riley said on Sept. 21 that her concern is that if the university does not have the revenue from the sales tax over the next 10 years, some of the maintenance and operations of the campus and some of the capital assets will not be maintained at the level that they have, and the university will have to make some "very strategic cuts."

An increase of the university's tuition and fees is another potential outcome, with this also being a time when the university is "already grappling with the potential of budget cuts or reductions in our allocations from the state."

McCutchen said he believes it is unfair, when Riley is already talking about increasing student tuition. McCutchen called it and the talk of cuts in allocations from the state "fear-mongering."

Mike Barr, co-chairman of Friends of UAFS, a group that launched the All In 4 UAFS campaign to support the tax extension, said he had no comment regarding creation of the Citizens Against Unfair Taxes except that he applauds the citizens for "stepping out and talking about what they feel about our situation here."

Riley said the university takes in, on average, about $6 million per year with the sales tax. This constitutes about 8% of the university's annual budget.