Candidates keep tone civil in only matchup by STEVE PEOPLES THE ASSOCIATED PRESS | October 8, 2020 at 7:19 a.m. 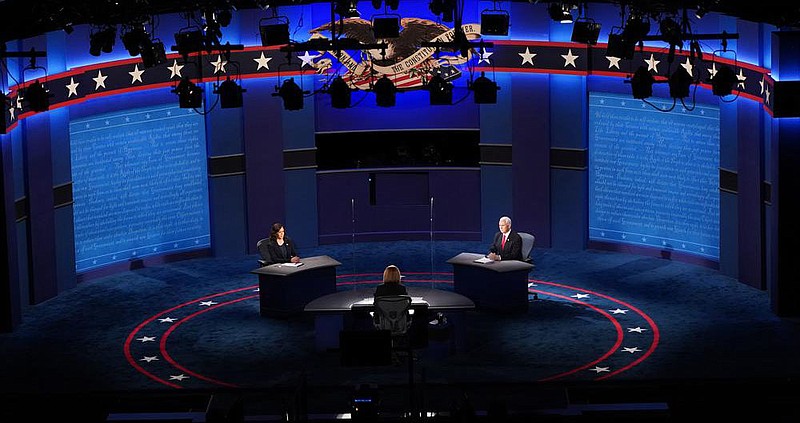 SALT LAKE CITY -- Vice President Mike Pence defended the Trump administration's handling of the coronavirus pandemic while his Democratic challenger, Sen. Kamala Harris, condemned it as "the greatest failure of any presidential administration" during a largely civil debate Wednesday night dominated by the pandemic.

In response, Pence commended President Donald Trump's decision to shut off travel from China, saying the decision "bought us invaluable time" to coordinate the country's response to the pandemic.

With Trump recovering from the virus in Washington, Harris declared she would not take a vaccine if the Republican president endorsed it without the backing of medical professionals.

Pence, who leads the president's coronavirus task force, acknowledged that "our nation's gone through a very challenging time this year."

But he added, "I want the American people to know, from the very first day, President Trump has put the health of America first," and promised millions of doses of a yet-to-be-announced treatment before the end of the year.

He also condemned Harris' skepticism of Trump's claims of vaccines-to-be: "Senator, I ask you: Stop playing politics with peoples' lives."

There were heated exchanges early on, but overall it was a far more respectful affair than the opening presidential debate eight days earlier.

Ultimately, the prime-time meeting was a chance for voters to decide whether Pence or Harris, a U.S. senator from California, is ready to assume the duties of the presidency before the end of the next term. Trump, 74, is recovering from the coronavirus, and 77-year-old Joe Biden has not been infected to date but would be the oldest president ever.

Neither Pence nor Harris acknowledged whether they have had a conversation with their party's presidential nominee about safeguards or procedures should either man become disabled.

Before Harris said a word, she made history by becoming the first Black woman to stand on a vice presidential debate stage. Harris, 55, is a former prosecutor who, as senator, made an unsuccessful run this year for the Democratic nomination for president.

[Video not showing up above? Click here to view » https://www.youtube.com/watch?v=MXFCIvsOzkg]

Pence is a 61-year-old former Indiana governor, former member of Congress, an ex-radio host and an evangelical Christian.

The candidates also clashed on taxes -- or specifically, Trump's refusal to release his tax returns four years after promising to do so, although he said an audit is ongoing. The New York Times reported last month that the president pays very little personal income tax but owes hundreds of millions of dollars in debt. Trump has disputed that report.

"It'd be really good to know who the president owes money to," Harris said.

"The one thing we know about Joe, he puts it all out there. He is honest, he is forthright," she added. "Donald Trump, on the other hand, has been about covering up everything."

Pence defended Trump as a job creator who has paid more than his fair share of taxes and said of Biden: "On Day One, Joe Biden's going to raise your taxes."

While the debate covered a range of topics, the virus was at the forefront.

Pence serves as chairman of the president's coronavirus task force.

The candidates appeared on stage exactly 12.25 feet apart and separated by plastic-glass barriers. Both candidates released updated coronavirus test results ahead of the debate proving they were negative as of Tuesday.

Critics suggested that Pence should not be at the debate at all.

The vice president attended an event last week at the White House with Trump and others who have since tested positive, but Pence's staff and doctors insist he does not need to quarantine under Centers for Disease Control and Prevention guidelines.

The clear partitions went largely unmentioned as Pence and Harris directed criticism at each other, and the home audience couldn't see them in split-screen TV images. But when the cameras showed Pence or Harris from the side, the candidates' reflections were evident on the barriers.

They were late additions to the stage in Salt Lake City, underscoring how the pandemic rages on less than a month before the Nov. 3 election.

Harris' team requested the barriers be used. Pence's team, meanwhile, insisted they were not medically necessary.

Other reminders that these are not normal times for a vice presidential debate: 20 chairs for guests were spaced roughly 6 feet apart in the debate hall, a performing arts center on the University of Utah campus. The auditorium's balcony included 60 students who won a lottery for tickets and were issued salmon-colored university masks.

Donors and other guests sat in traditional theater seats, though there were at least two empty seats between guests.

Staff members took guests' temperatures upon entrance into the hall and asked people to sanitize their hands. Wearing a mask was required. Guests were reminded before the event started to keep their masks on and advised that anyone not complying would be asked to put them back on.

Frank Fahrenkopf, chairman of the Commission on Presidential Debates, warned that those who refused would be escorted out of the hall by law enforcement.

A disclaimer on the back of the debate tickets said participants relieved the commission as well as the debate's site host "of any and all liability of any kind of character ... including covid-19."

On Wednesday, even the network TV cameras had plastic glass wrapping on the sides and back. But the barriers between Harris and Pence did not extend to the moderator, Susan Page of USA Today.

Pence's guests in the debate hall were meant to convey a "law and order" message that has been a centerpiece of the Trump campaign. They included Ann Marie Dorn, the widow of retired St. Louis police Capt. David Dorn, who was shot and killed on June 2 after a violent night of riots and protests. She also spoke at the Republican National Convention.

The vice president was also joined by Flora Westbrooks, whose Minneapolis hair salon was burned down in May during protests over George Floyd's killing by police.

Also there on Pence's behalf were the parents of Kayla Mueller, a humanitarian aid worker who was taken captive and abused and killed by Islamic State militants, who were led by killed Islamic State leader Abu Bakr al-Baghdadi.

Pence said Mueller's family believes that, if Trump had been in office, "Kayla would be alive today." Al-Baghdadi was killed during a special forces raid in Syria in 2019.

Speaking to Mueller's family, Harris said, "What happened to her was awful and it should have never happened."

Before the debate, dozens of Trump and Pence supporters stood on the street outside waving flags and chanting, some holding anti-abortion signs. A long line of supporters of the Biden-Harris ticket, many cheering and waving campaign signs, also lined areas near the auditorium.

• Health care. Harris said that the Trump administration is "coming for you" if you have a preexisting condition.

In response, Pence says that "Obamacare was a disaster" and that he and Trump have a plan to cover people with preexisting conditions.

• Race. Harris said she doesn't believe justice has been done in the case of Breonna Taylor, who was killed in a police drug raid that went bad.

Taylor was shot multiple times in March after being roused from sleep by police at her door. A grand jury did not charge any officers for their role in Taylor's death.

She says George Floyd would be alive if such a ban existed.

Pence said Taylor's family "has our sympathies, but I trust our justice system, a grand jury that reviews the evidence."

Pence also said there is no excuse for what happened to Floyd, who was killed after police pressed on his neck with a knee for several minutes. He says, "Justice will be served."

He also said there is no excuse for the rioting and looting that followed Floyd's death.

He called it "remarkable" that Harris, as a former attorney general and prosecutor, would question the grand jury's decision in the case not to charge an officer with killing her.

Pence rejected the idea that law enforcement officers have a bias against minorities.

"I want everyone to know who puts on the uniform of law enforcement every day, President Trump and I stand with you," Pence said. "We don't have to choose between supporting law enforcement, proving public safety and supporting our African American neighbors."

• Supreme Court. Pence said Supreme Court nominee Amy Coney Barrett is a "brilliant woman" who will bring a lifetime of experience and "a sizable American family" to the nation's highest court.

Pence and Harris were asked how their respective states of Indiana and California should handle abortion if the Supreme Court were to overturn Roe v. Wade.

Pence said he wouldn't presume to say how Barrett would vote on Roe. But as a candidate in 2016, Pence often told conservative crowds that Trump would appoint justices who would send Roe to the "dustbin of history."

Harris said she will "always fight for a woman's right to make a decision about her own body."

Harris said it was "insulting" to suggest that she and Biden would "knock anyone for their faith."

She noted that Biden is Catholic, and she criticized Republicans for rushing to confirm Barrett.

Pence said Biden would add members to the Supreme Court if the Democrats "somehow win this election."

"I tell you people across this country, if you cherish your Supreme Court, if you cherish the separation of powers, you need to reject the Biden-Harris ticket come November."

Pence promised to keep the court a nine-member panel if Trump is reelected.

Harris didn't directly answer Pence's accusation. But she countered that the Trump administration has stacked federal courts nationwide with white conservatives, accusing Pence of participating in a different version of court packing.

"This is what they've been doing. You want to talk about packing the court. Let's have that discussion," she says. "Let's go on and talk about the issue of racial justice."

Trump, who is quarantining at the White House as he convalesces from covid-19, took to Twitter to praise Pence and slam the Democratic vice presidential nominee less than an hour into Wednesday's debate in Salt Lake City.

"Mike Pence is doing GREAT! She is a gaffe machine," Trump chimed in on Twitter.

Information for this article was contributed by Kathleen Ronayne, Michelle L. Price, Jill Colvin and J. David Ake of The Associated Press. 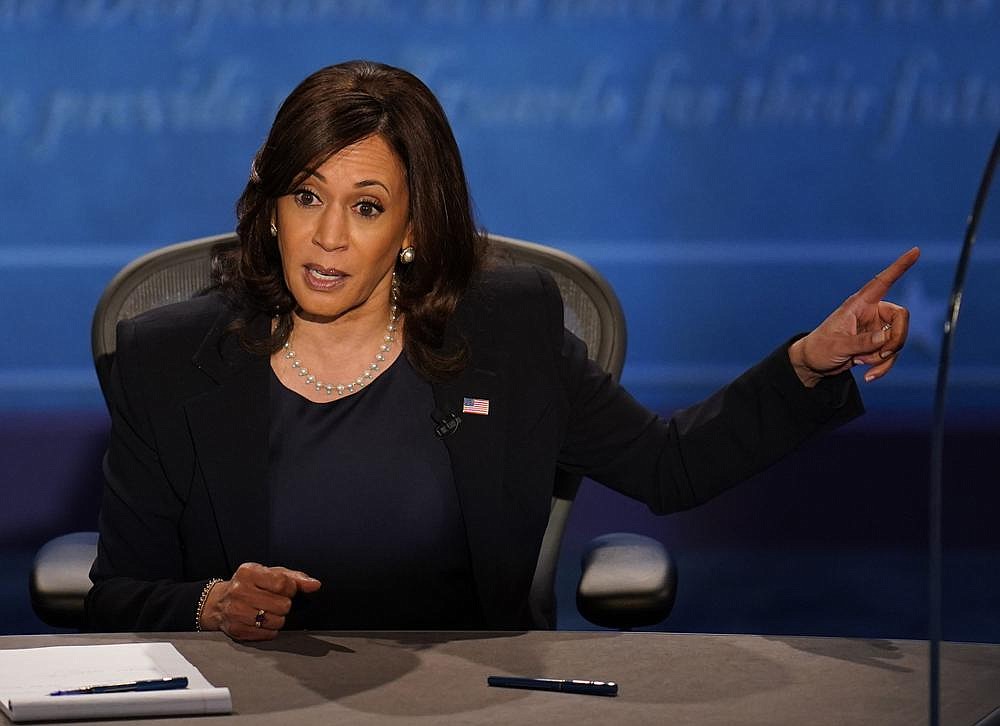 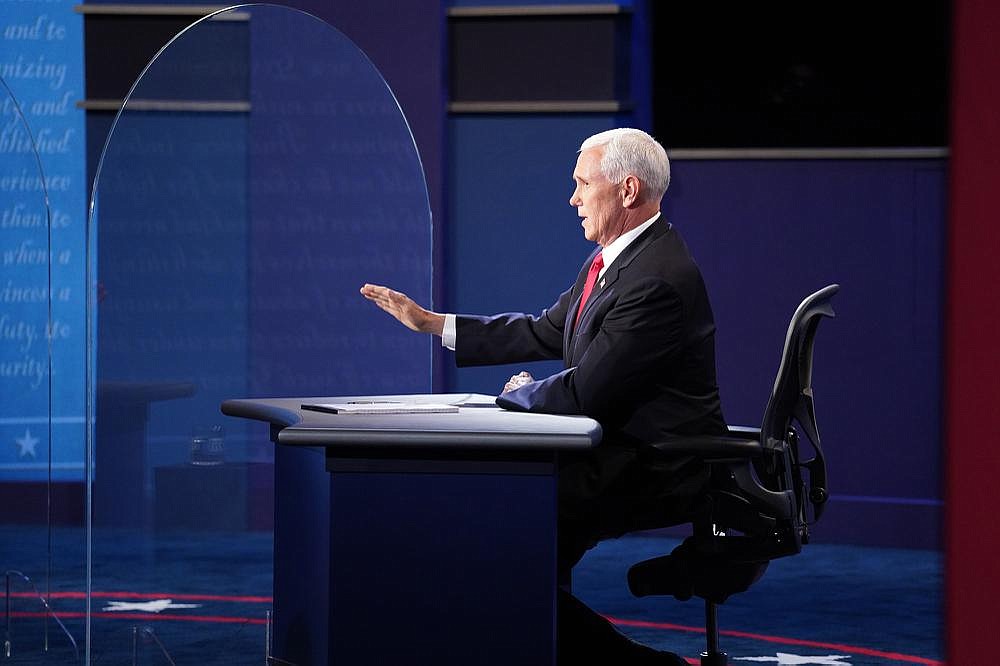 Vice President Mike Pence asserted during the debate that President Donald Trump “has put the health of America first,” and he defended the administration’s efforts to acquire a coronavirus vaccine before the end of the year. (The New York Times/Ruth Fremson) 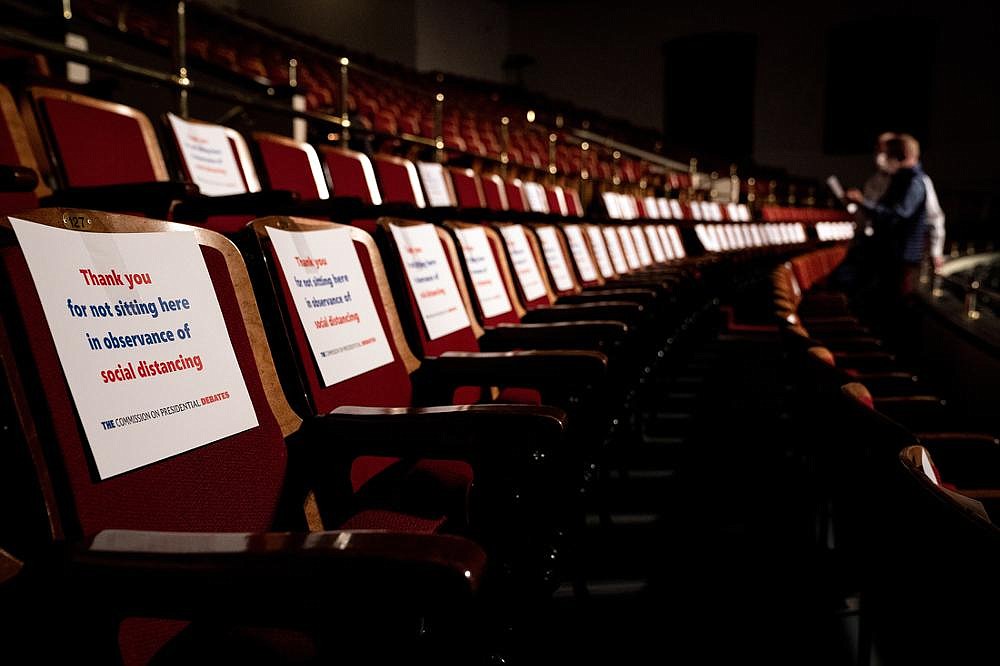 Workers place social-distancing signs on seats Wednesday at the University of Utah in Salt Lake City for the vice presidential debate. Donors and other guests sat in the seats, though there were at least two empty seats between people. (The New York Times/Erin Schaff) 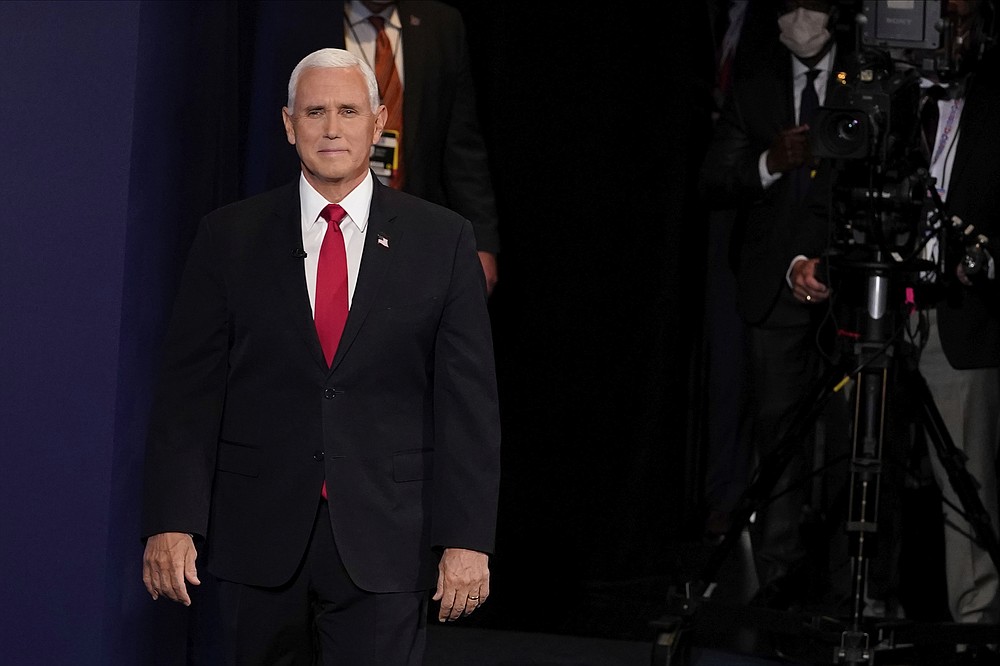 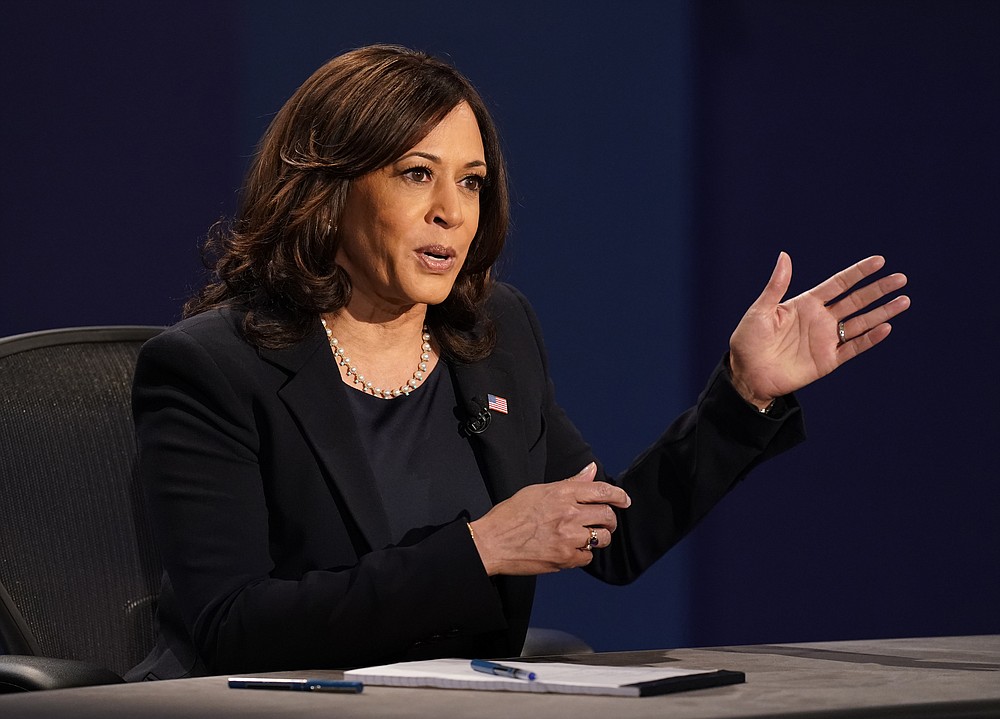 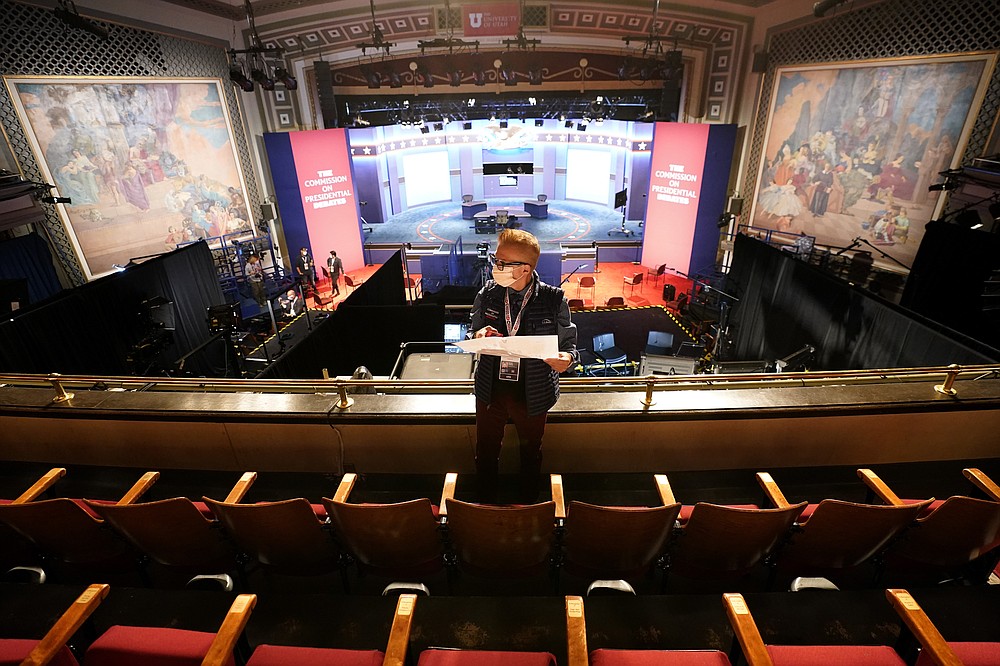 A member of the production staff holds a seating chart while putting labels on chairs socially distanced from each other ahead of the vice presidential debate at the University of Utah, Wednesday, Oct. 7, 2020, in Salt Lake City. Vice President Mike Pence and Democratic vice presidential candidate, Sen. Kamala Harris, D-Calif., will participate in the debate Wednesday night. (AP Photo/Julio Cortez) 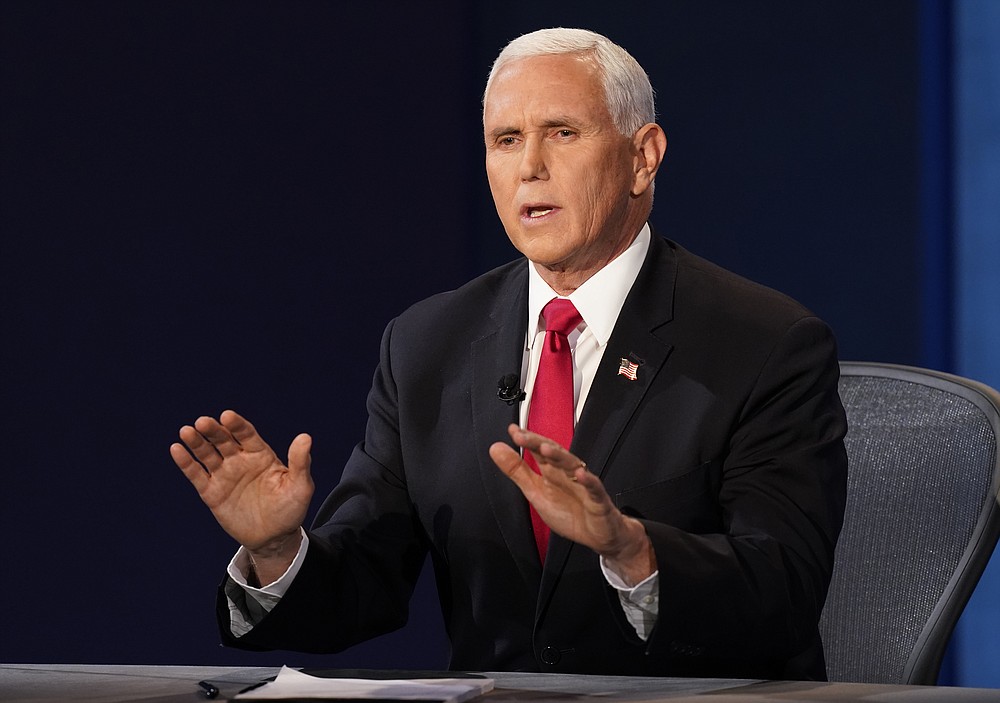 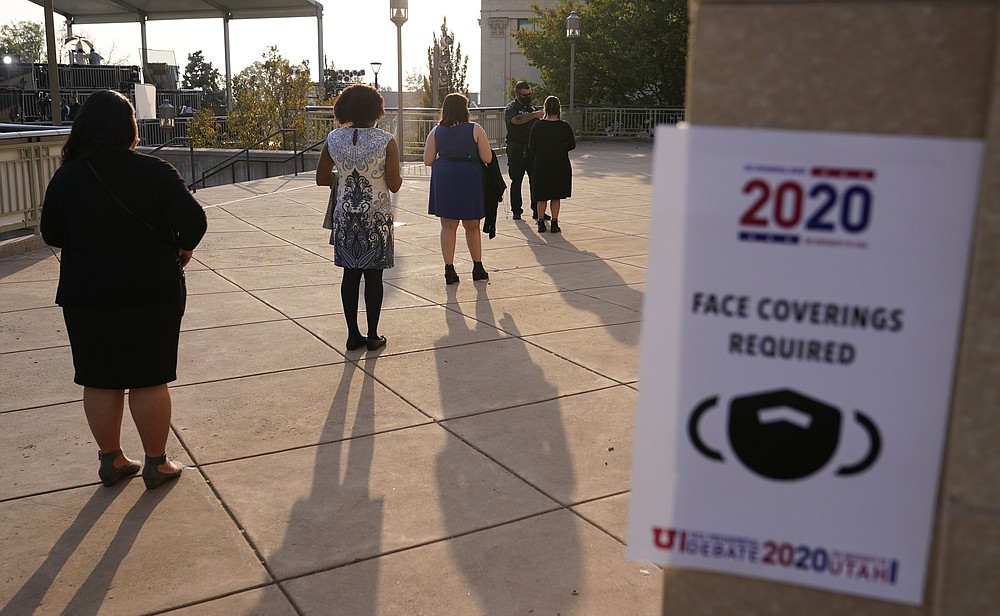 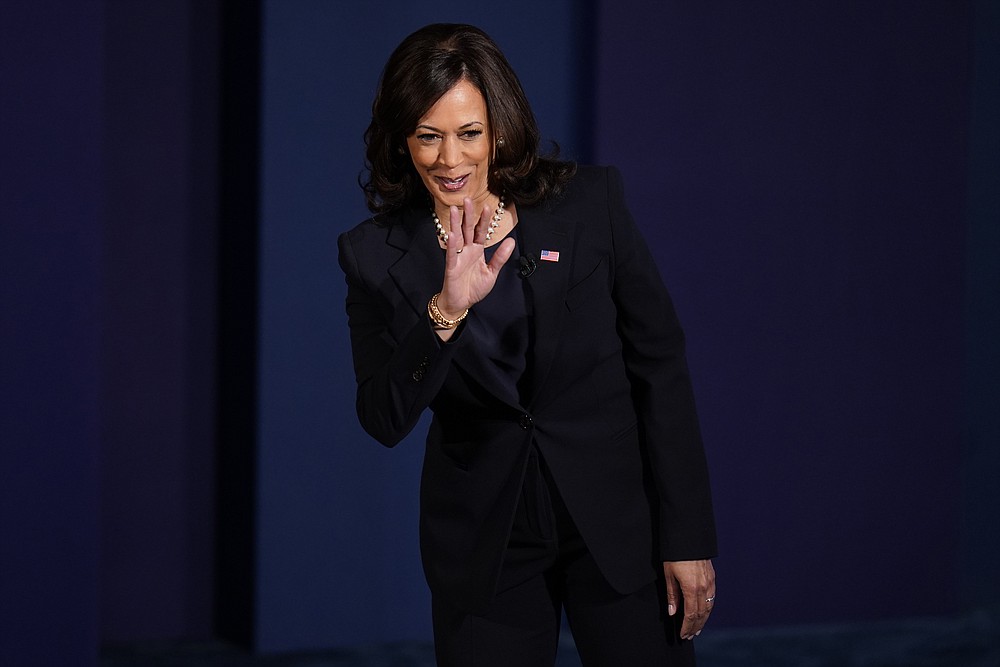 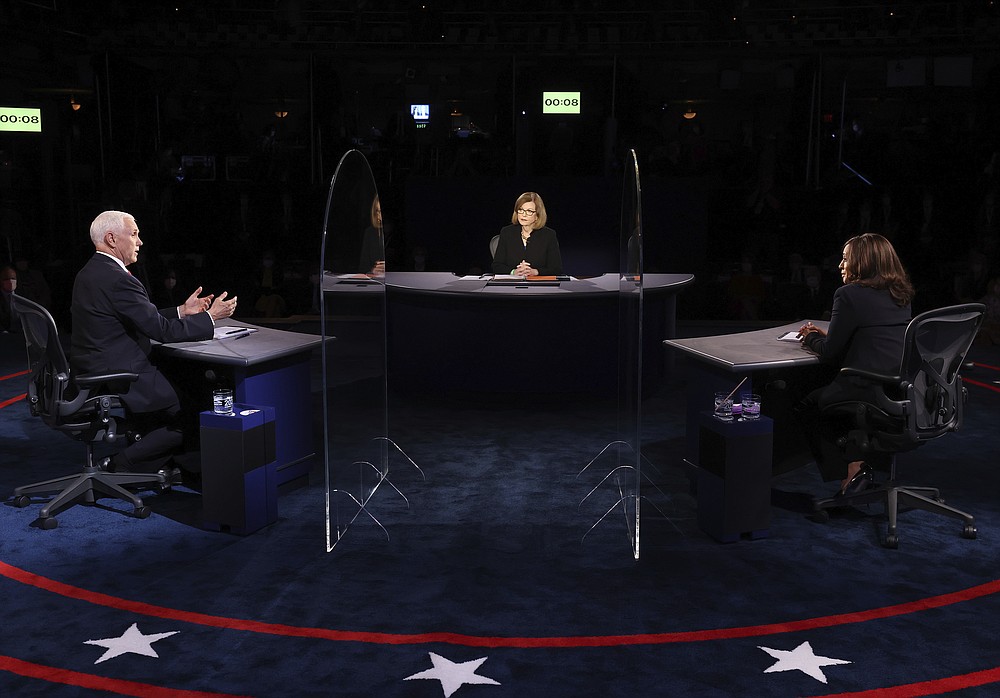