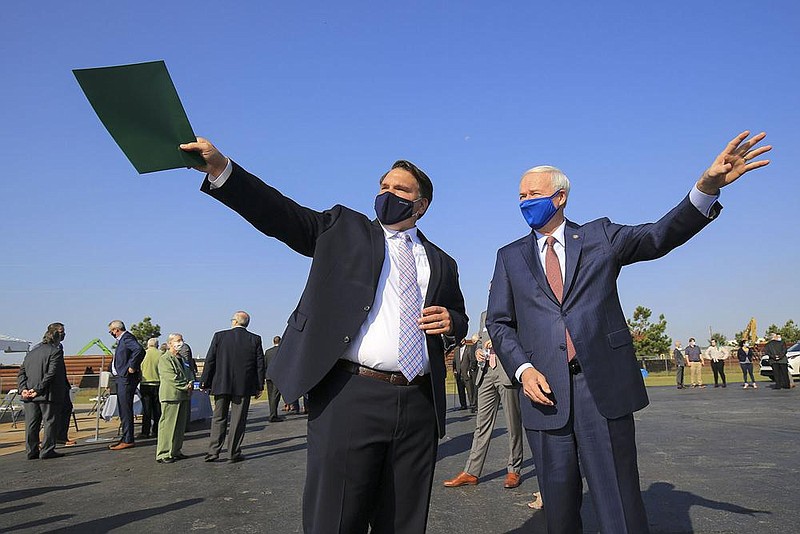 Revolution CEO Sean Whiteley (left) talks with Gov. Asa Hutchinson before a news conference Wednesday to announce the expansion of the company’s facility at the Little Rock Port. Revolution is the parent company of Delta Plastics. (Arkansas Democrat-Gazette/Staton Breidenthal)

Revolution Plastics announced Wednesday that it will invest $20 million in its manufacturing facility at the Little Rock Port in an expansion that will create 60 new jobs.

Gov. Asa Hutchinson led a delegation of city, state and county officials to announce the expansion and praised the company for starting in the "heartland of America."

Revolution, parent company of Delta Plastics, will add 36,000 square feet to its facility at the port.

"The partnerships we formed, and the support we have received at the local and state levels for this expansion project is a testament to the strength of the Little Rock community," Whiteley said in a statement.

Revolution began more than 30 years ago in Stuttgart by providing plastic irrigation tubing to farmers in the Delta, focusing primarily on Arkansas, Louisiana and Mississippi. That product remains the foundation of its business, and serves more than 10,000 farmers and dealers in the United States.

Revolution uses a closed-loop system, allowing it to control how its products are recycled and manufactured.

The company manufactures plastic products -- trash bags, irrigation tubing for farmers, carry-out bags for restaurants -- and then collects those products after use, cleans them and breaks them down into resin pellets that can be used to manufacture the products all over again.

In February, Whiteley said he was hopeful the company would expand its operation in Little Rock, as well as invest in its main recycling site in Stuttgart.

Revolution reported 1,200 U.S. employees in February, compared with just 400 in 2012, with much of the increase coming through acquisitions.

Along with the polytube irrigation, Revolution produces and recycles a thin polyethylene film that protects grapes, almonds, strawberries and other crops. It has developed mulch film that provides farmers with ground cover to lock in heat and control weeds. There's also silage film for the dairy industry.